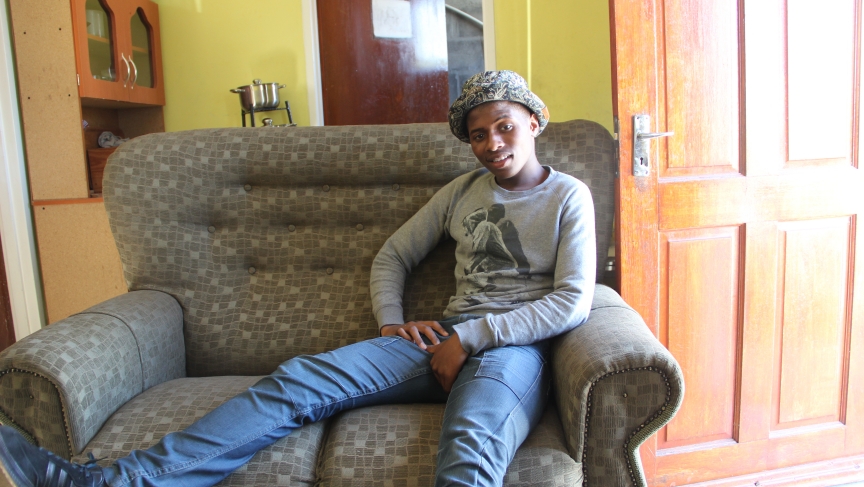 Earlier this year, I produced a radio story about an impressive South African student. Sivenathi, or Sive (SEE-vay), was a junior at the Centre of Science and Technology, a public high school in Cape Town that I’ve been following this year.

Sive has had a year of tremendous ups and downs. First, he traveled to Washington, DC, through a prestigious leadership program. Then, a few weeks after he returned to South Africa, his mother passed away. His father had died years before, which meant that Sive, at age 17, was now in charge of his own home. He and his brother were living on $30 a month – and struggling.

That story affected one of our listeners.

“It really upset me,” said Ashley Jordan, who listens to our radio program in Portland, Oregon. “This kid that had already been through so much – that had worked so hard – could potentially just get swallowed by poverty.”

Ashley wanted to help, so she reached out to friends and family and customers at the coffee shop where she worked. She made flyers and started a campaign through GoFundMe, an online fundraising website. She eventually raised a thousand dollars.  She tracked down the principal at Sive’s school, who put her in touch with Sive.

When Sive got a message from Ashley, asking for his banking information, he refused. He thought it was a scam. But eventually, Sive came to trust her. A few weeks ago, the money came through.

I stopped by his home – a three-room cement house in a low-income part of Cape Town. Outside his front door, girls skipped rope with bare feet.

Sive said that, when he got the money, he and his brother went straight to the store. They wanted to buy some paint for the house. But on the way, they saw some shoes they liked.

“And the idea was, we can always buy the paint later,” Sive said, laughing.

They bought the shoes – a shiny pair of blue-and-red loafers for each of them. But when they got home, Sive thought about what had just happened – and realized something about himself.

“Your brain changes when you have a lot of money,” he said. When he saw something he liked at the mall, he immediately pictured himself buying it and owning it.

He got worried that he might waste the money. So he came up with a plan. First, he put a third of the money into a bank account that he can’t access until next year. Next, he bought some things he badly needed – school supplies, and a cell phone.  Then, he made his big purchase.

To show it to me, he opened the door to the living room. Inside was a big, green sofa, flanked by two matching chairs. Sive sank into the couch cushions.

I asked Sive why he had spent $300 on furniture.

“To me, it’s a big thing,” he said. His mother, who passed away in June, had always wanted a home she could be proud of, he said.

“Before my mom died, I tried to show her that I will do everything to make this house look good. That’s what my mom wanted,” Sive said.

Sive said he also hopes that Ashley, the woman who raised the thousand dollars, approves of how he spent it. But Ashley says that was never an issue for her.

“Any way that he wanted to spend this money makes me happy,” she said. “Because he’s someone that just deserves some happiness.”

And about that paint Sive intended to buy? He did end up getting it. Now the new green sofa is surrounded by bright yellow walls.