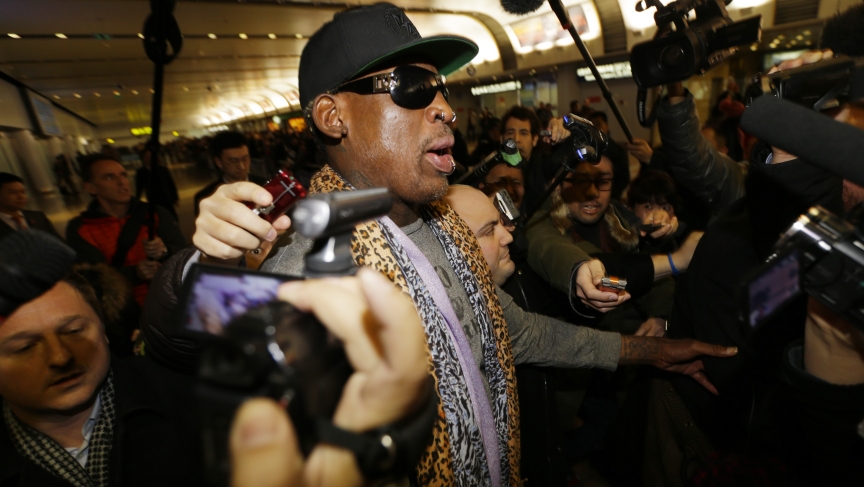 Former NBA basketball player Dennis Rodman speaks to the media as he returns from his trip to North Korea at Beijing airport, December 23, 2013.

Dennis Rodman is on his way home from North Korea, again, and this time he took head-on critics of his engagement with the reclusive and totalitarian state — saying it's "not my problem."

Rodman was in North Korea to oversee tryouts and training for a basketball team that will stage an exhibition match next month for dictator Kim Jong Un's birthday, according to the National Post. The former NBA star also wants to bring about 12 other former NBA players with him to participate in the exhibition but, reportedly, is having trouble getting players to agree to play in the game.

As of a few hours before he left, Rodman hadn't met with Kim on this trip. Rodman in the past has praised Kim as a great leader. He told the Associated Press he doesn't come to North Korea only to meet with Kim and that it wasn't a big deal they didn't meet on this trip. He's expected back in North Korea for the basketball exhibition for Kim's birthday, which is Jan. 8.

President Barack Obama over the weekend notified Congress that he'd deployed almost 50 US soldiers to South Sudan to help with evacuations of embassy personnel and Americans trying to flee the country. Four US servicemembers were wounded on Saturday during the aborted rescue mission. Obama said he was closely monitoring the situation, adding he “may take further action to support the security of U.S. citizens, personnel and property, including our Embassy, in South Sudan,” reported The Los Angeles Times.

Three prominent Egyptian activists from the 2011 Arab Spring protests were handed lengthy prison sentences this week in Cairo. All three received the maximum sentence: three years in prison. The highly political punishment, according to The Telgraph, shocked Cairo's political activist community. After the military overthrew the democractically-elected government of Mohammed Morsi, in the wake of popular protests, the military moved quickly to arrest and shutdown Muslim Brotherhood activists.

Need a break from the family?

As you head off to family gatherings this week, consider checking out one of these books recommended by the staff of PRI's The World. Host Marco Werman's pick for the list was "Claire of the Sea Light" by Edwidge Danticat. He says it's a great book for really understanding the culture in Haiti — a country that's so close to us but often so hard to understand.

The two women of the band Pussy Riot who've spent the last 18 months in prison were released this week under a broad amnesty bill that Russian President Vladimir Putin has used to release a number of notorious political prisoners, according to The Guardian. The two women, Nadezhda Tolokonnikova and Maria Alyokhina, were convicted of "hooliganism" after a protest performance inside a Moscow church. Putin has used this amnesty bill as a chance to improve Russia's human rights reputation in advance of the Sochi Olympics in 2014.

Behind the curtain in Iraq

The BBC's Shaimaa Khalil traveled to Iraq recently to see how life is going, two years on after the US withdrawal. What she found was a country where violence and sorrow are all-too-common, where families have been ripped apart by violence. In a market, she met an elderly man who lost his three sons to bombings and now has to care for his grandchildren. PRI's The World has an interview with Khalil about what she found.

But who will think of the elves?

Iceland's elf community is back in the news — or at least their human advocates are. Iceland has a rich tradition where residents believe the countryside is home to elves. And now, these elf activists have teamed up with environmentalists to block construction of a new highway from the tip of the Álftanes peninsula, where the president has a property, to the Reykjavik suburb of Gardabaer, according to The Guardian. The elf advocates claim the highway will disturb an "elf community" — including an elf church. The project has been paused until an Icelandic court rules on the impact of the project on the local environment and on the project's impact on elf culture.

For LGBT rights it was a "great year in the U.S., but globally? Turning out to be one of the worst": http://t.co/UO40mBMxWo by @jlfeder

An ice storm rolled through Toronto and southern Ontario this weekend, knocking out power to 300,000 people. The CBC described it as "truly one of the worst" storms to hit the city. The storm lasted more than 24 hours with ice and freezing drizzle off-and-on.