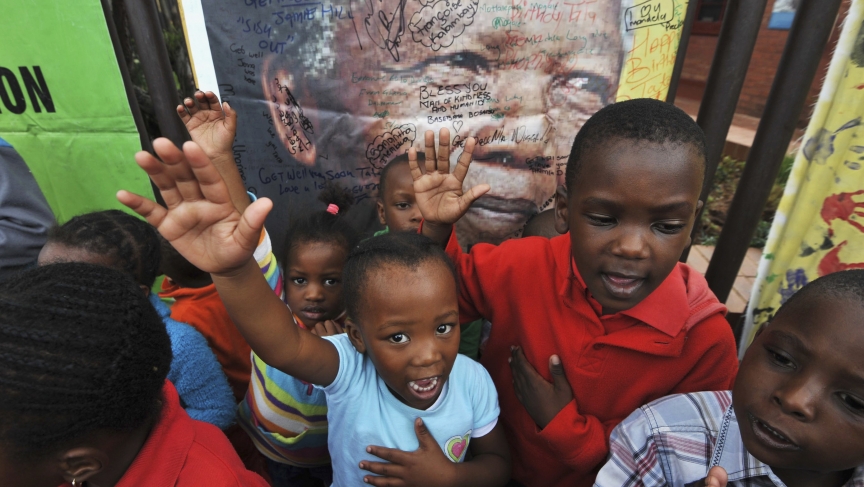 Children react during a gathering of mourners on Vilakazi Street in Soweto, where the former South African President Nelson Mandela once lived. Taken December 6, 2013.

Soweto, the largest black township in South Africa, was the nucleus in the fight against apartheid.

"It represented the aspirations of many black people," he says, "for human rights, for the freedom of racial oppression."

Nkosi spoke to us while across the street from Nelson Mandela's former home. Bass music thumped in the background. Voices sang. Nkosi says that's normal.

When Nkosi was a child, officials told him that Mandela was a terrorist. That he was bad for human beings. That he was bad for society. People were not even supposed to see his photograph. But Nkosi says that black leaders in the township would meet late at night, under cover of darkness, and explain to children that Mandela was a freedom fighter.

"And that he was fighting to liberate all of us," he says. "Black and white together."

Nkosi's father was part of the fight. During apartheid, Mandela was under guard and constantly monitored. So Mandela used boys as messengers to both move paperwork and provide policy papers to the community. Nkosi's father was an administrator and copy editor for many of those documents.

If there is one part of Mandela's life that needs clarification, Nkosi says it was his role in the Spear of Africa, the armed effort against the Afrikaner government.

"Mr. Mandela was actually made to join the armed struggle because the regime he was trying to sort out was so brutal."

At his heart, says Nkosi, Mandela was a peaceful man.

But peace was hard to obtain, especially in prison. Nkosi says that, in the final years of Afrikaner rule in South Africa, the country really could have gone either way. It was a tricky time. Violence was everywhere. Even after Mandela walked out of prison, the country was in peril.

The country finally changed — and moved away from violence. Mostly due to an important lesson that Mandela taught South Africa: forgiveness.

"Forgiveness on a massive scale," says Nkosi. "He told his prisoners to let bygones be bygones." And he did this even after enduring torture.

Nkosi says that 27 years of prison did nothing to deter Mandela's sense of humor. The two were once stuck on an elevator together. And Nkosi says there is no one better to be stuck with than Mandela. He treated all people as an equal. He let all people, poor people, know they are loved.

Nkosi says that is why millions rallied behind him. "He was a hero, and also a neighbor."