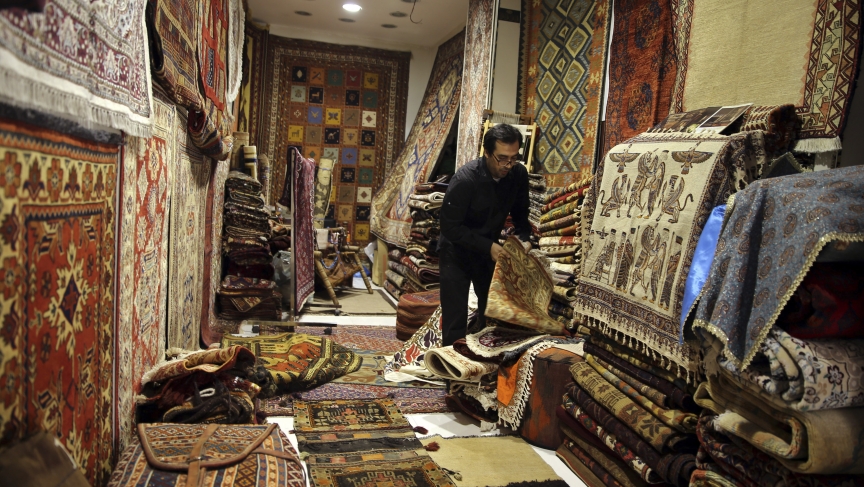 A seller arranges Iranian carpets at his shop in Dubai's old market on Nov. 24, 2013. Dubai's non-oil trade with Iran has shrunk by over a third in the past 18 months, in the wake of intense international sanctions.

The nuclear deal between Iran and six major powers has been described as "historic" and a "seismic shift." A story in the New York Times describes this "seminal moment" as a chance for the Obama administration "to chart a new American course in the Middle East."

Such rhetorical flourishes help explain why US allies in the Middle East might be nervous about the prospect of America warming up to Iran. After all, Saudi Arabia is fighting a proxy war against Iran in Syria. And Israel sees Iran's nuclear program as an existential threat.

Yet if they focus on the big picture, US allies might see a potential upside, according to Suzanne Maloney of the Brookings Institution.

“If we can, in fact, achieve a real lasting deal with Iran that begins to roll back its nuclear ambitions and its nuclear infrastructure, that will be of a tremendous and lasting benefit to the region and to the world,” she says.

Maloney is plenty doubtful, though. “We need to avoid irrational exuberance,” she says.

Dan Michaels of the Wall Street Journal says the deal that was reached is hardly "the fall of the Berlin Wall."

"What they're doing is cracking open a tap slightly to show the Iranians that there might be some relief if they play ball further. But this is not a big opening," he says.

According to Michaels, the accord will allow car companies from Europe, like Peugot and Renault to get back into the Iranian market. The deal allows other companies to sell car parts and airplane parts. Oil shipping is going to be allowed.

"But its not the opening of a flood gate for business in Iran," he adds. "The pillars of the Iranian economy have been pressed, if not crumbling, under the weight of the recent sanctions. And that's what has driven the Iranians to do a deal here."

Maloney says that progress on the nuclear issue could bring positive changes in Iranian behavior, for example, in Syria. “There's really no expectation that we see a sort of rapprochement between the US and Iran that [leaves] the continuing behavior by the Iranian government in Syria untouched," she says.

“Unless we begin to unravel Iran's support for terrorism in the Middle East and its role in Syria,” Maloney continues, “there is really no possibility of a return of American businesses, or the lifting of the primary US embargo, which has now been in place for almost 20 years.”

The government of Bashar al-Assad officially welcomed the news of an Iranian nuclear deal. But Maloney says that hardly means the Syrian president is truly happy about this development.

“Clearly, if there is going to be a change in the nature of the relationship between Iran and the rest of the world, there will have to be some backing away from that relationship between Iran and Syria," Maloney says. “I suspect Bashar's welcome of the deal is also an attempt to keep himself relevant, and to remind the Iranians that he, too, matters."

The Saudis too welcomed the news, officially at least.

"If there is goodwill, then this agreement could be an initial step toward reaching a comprehensive solution for Iran's nuclear program," Saudi leaders said in a statement.

But Ian Black, Middle East editor for The Guardian, says it's hard to miss the distrust the Saudis have.

"The government is in a kind of sulk," he adds. "The Saudis distrust the Iranians."

Black says it kind of like the distrust and hostility between the US and the USSR during the Cold War. The Saudis see the hand of the Iranians behind everything bad in the region, from violence in Iraq to civil war in Syria. That's exaggerated, Black believes, but the Iranians certainly "do things in the Gulf that are designed to undermine, to weaken, to annoy Saudi [Arabia], the regional power."

But ordinary Saudis, he says, seem to be a bit warmer toward the whole exchange — even somewhat pleased to see the tension reduced.

"They think it's better for the economy of the region," he says.

However, many Saudi people — at least the people who think about international affairs — and Saudi officials are worried by trends in US policy. Black says they were furious when President Obama backed away from military action against Syria, after the massive chemical weapons attack near Damascus in August.

"[The Saudis] have been an important ally of the United States for 60 years, and they feel that they are being abandoned," Black says. Like the Israelis, they've come to take the relationship for granted, but now "it's dawning on them gradually — now perhaps a little more sharply — that it ain't what it used to be."

Iran's other alliances — such as the one with Hezbollah in Lebanon and Palestinian militant groups, including Hamas, in the Gaza Strip — make the Israelis wary of any diplomatic agreement with the Iranian government.

The official reaction from Israel in recent days has been purely dismissive of the deal. “There is broad skepticism,” says Brian Katulis of the Center for American Progress. Still, “opposition from the political leadership does not seem to reflect where ordinary Israelis are at.

“They're not overly optimistic. But I think there's a willingness to see it through,” he says.

American partners in the Middle East have had a lot to be anxious about these past couple of years. Take the unresolved Israeli-Arab conflict, the messy Arab uprisings, and now this potential US shift on Iran.

Katulis says there is a mistaken sense in the Middle East that this US administration is somehow going to stop paying attention to Middle Eastern problems.

“The biggest thing [is] the expectation, coming from Washington, that others in this part of the world need to pull their weight, that they need to operate differently,” he says. “The style of US leadership is changing. ... That's what scares many of these countries the most.”

There is also some concern that the Obama administration might be overreaching, that focusing on Iran so intensively will also mean neglecting other US priorities in the Middle East, such as the Israeli-Palestinian peace process.

Nicholas Burns of Harvard University's Kennedy School says the US government has a great deal of bandwidth for multi-tasking. But Burns concedes that the Obama administration appears to be taking on one of the most complex diplomatic challenges in recent American history.

To illustrate that complexity, Burns says negotiating with Iran is forcing President Obama to operate in “four rings” simultaneously. First, there is the ring of international diplomacy with Iran and the so-called P5+1 group of nations — meaning the US, Russia, France, Britain, Germany and China.

Then, the secret bi-lateral talks between the US and Iran. Ring three, Burns says, means that Obama “has to convince the Saudis and Israelis that what he's doing is right and that they should support it.”

“And then four, he's got to convince Congress.”

And that last one might be as tough as any other diplomatic challenge Obama faces in the Middle East.