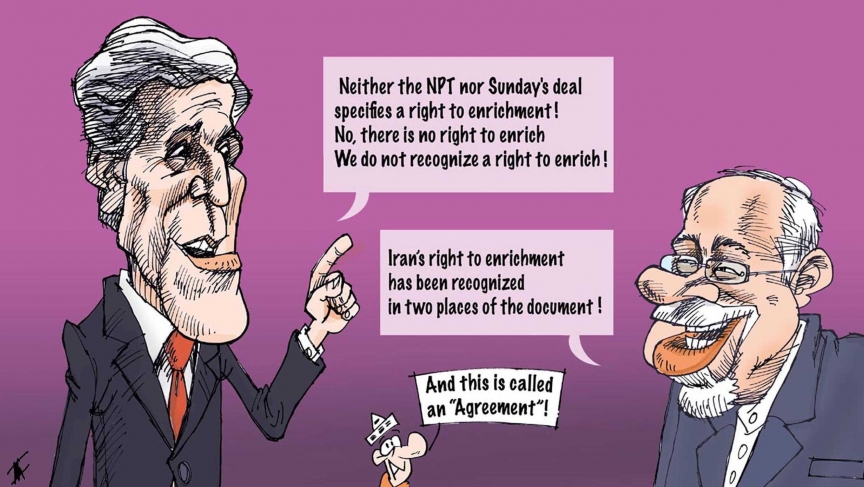 Iranian cartoonist-in-exile Nik Kowsar shows the selective interpretation of each side in the Iran nuclear deal.

There is no shortage of talking heads commenting on this weekend’s historic deal with Iran.

But Monday's editorial from the Jerusalem Post puts the Israeli viewpoint especially vividly: This is a defeat for Israel, and a step toward a nuclear-armed Iran. Meanwhile, BBC Trending has been looking at how ordinary Iranians have responded, particularly those with access to forbidden technologies such as Facebook and Twitter.

A Maoist cult led to three decades of slavery in London

Details are gradually emerging from one of the more bizarre and horrific cases to come out of the UK in many years. Last week, we heard that three women had been freed from an otherwise-ordinary house in London after 30 years of slavery.

Now it's emerged that the origins of the household lay in a ‘Maoist’ cult. The BBC has the story.

One of India’s most tireless investigative magazines is in disarray this week after it emerged that Tehelka's founder and editor-in-chief had been accused of sexual assault. PRI's The World explores the sense of shock that the case has created in India. Tehelka has been an outpsoken advocate for women's rights and for combatting gender-based violence.

The town with a country jail for polar bears

The Canadian town of Churchill is proud to bill itself as ‘the polar bear capital of the world.’ But as habitat loss forces more and more bears into the town itself, local police have come up with a unique solution to keep the peace: a polar bear jail.

The Guardian has produced a video on law and order in a city described as a model for co-existence between people and wild animals.

Haiti sees a building boom, but it's not what you might expect

But these aren't any buildings, these are luxury hotels. Advocates say it will help rebuild the local economy, first, by serving and enticing business people and tourists and, second, by providing jobs to local residents. But critics contend the luxury hotels, standing next to neighborhoods where people still live in temporary shelters, are the wrong thing at the wrong time. PRI's The World explores the issue and hosts a live discussion from 3-9pm ET today, November 25.

It was a cool, wet weekend in Dubai, with pictures showig residents wrapped in blankets and crouching under umbrellas as they walked the streets of the desert town. Much of the United Arab Emirates was bathed in what Emirates 24/7 described as the worst storm in seven years. More showers are expected this week.