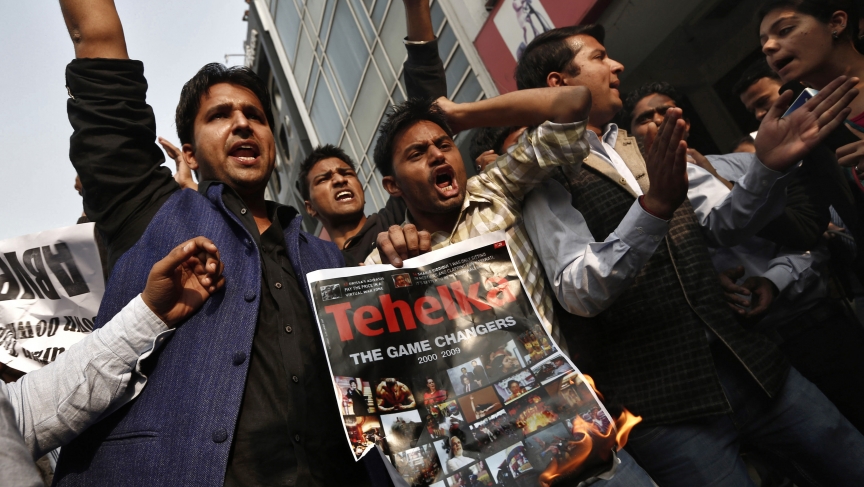 Yet another case of sexual assault is making the headlines here in New Delhi. But this case is different from the ones you may have read about in the past year.

This is a case of workplace sexual harassment, and it involves employees of an award-winning investigative magazine called Tehelka, known for its coverage of corruption and human rights, including women’s rights.

I regularly read the magazine online, especially for its dogged coverage of violence against women. Yet the alleged perpetrator is the magazine’s founder and editor-in-chief, Tarun Tejpal. The accuser is a young journalist at the magazine, and Tejpal’s daughter’s best friend.

In an e-mail to a senior colleague, the young woman accused Tejpal of sexually assaulting her in an elevator two different times during an international conference in Goa. Media stories have included leaked emails and texts between Tejpal and the victim.

The accuser has not filed a complaint with the police, but has requested that the magazine set up a committee, as required by law, to deal with the case. However, the police have decided to investigate, based on media coverage. AndTejpal has been charged with rape.

You can read more details about the case at Firstpost.com, including a memo about the incident that went to Tehelka staff. But beyond the specific details, I think this case may be a new tipping point in India’s fight against gender-based violence.

Workplace sexual harassment is all too common here in India, as it is elsewhere in the world. But unlike most developed countries, India hasn’t had a legal framework to deal with the problem, and there is little awareness among both men and women about what constitutes sexual harassment and what victims can do in response to such harassment.

In 1997, the Indian Supreme Court put out guidelines for employers aimed at making workplaces free of sexual harassment. But those guidelines were rarely implemented. Earlier this year, the Indian parliament passed the Sexual Harassment of Women at Workplace (Prevention, Prohibition and Redressal) Act, which requires employers to make workplaces free of sexual harassment, and to deal with cases when they arise through in-house committees. According to this Times of India article, “Repeated non-compliance will even lead to higher penalties and cancellation of license or registration to conduct business.”

The horrific gang rape and murder of the 23-year-old woman in New Delhi last year pushed Indian citizens to demand new laws and regulations to protect women from sexual assault. And the issue has remained prominent in the media over the past year.

This has led to many women feeling more courageous about coming forward with their own stories of rape and sexual assault. The new anti-harassment law is another step in that direction.

My friends here in New Delhi tell me just how common it is to find powerful men in all professions — be it journalism, politics, academics — who harass and often assault younger women in their workplace. But the vast majority of victims never speak up because society tells them to let it go, to protect their own jobs and, most frustratingly, the reputations and families of the perpetrators.

I remember my first day in college in Darjeeling, when some senior students warned us freshmen about certain professors, because they had a bad reputation for being a little too fond of women. Thankfully, I never faced anything. But I know of students who did. Their stories remained topics of student gossip. No one ever thought to complain.

But for me, returning to India after 11 years abroad, the Tehelka case brings hope, because the young journalist had the courage to speak up and complain to her superiors. And the media and society have, for the most part, responded in support of the victim. In a break from tradition, the accuser didn’t think that what happened was her fault.

There have been a few other recent cases of lawyers coming out with stories of being assaulted by their supervisors. Other similar stories in less well-known corners, in colleges and smaller work places, are trickling in.

I bow to the courage of these women for speaking up and taking a stand. They are setting an example. They are teaching the next generation of Indian women not to stay silent, but to speak about a crime that is sadly too common not just in India, but all over the world.