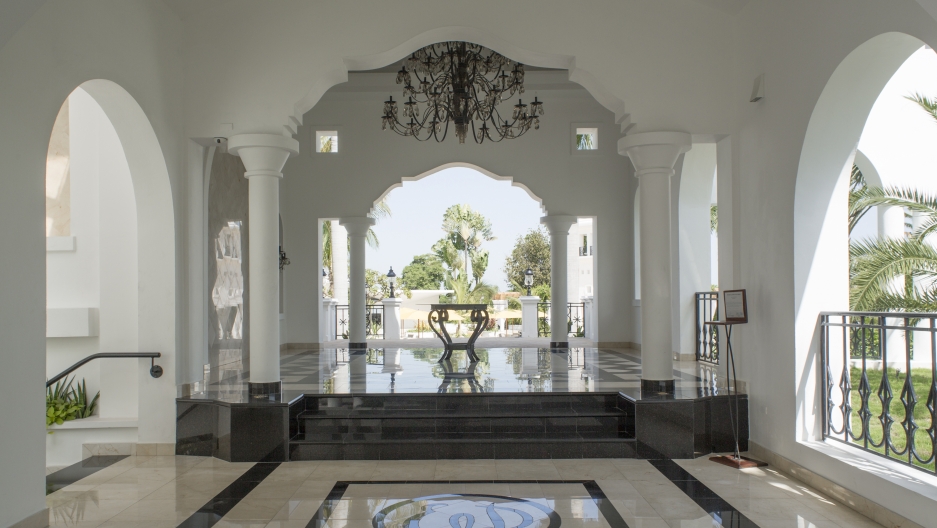 The elegant lobby at the El Rancho is open to the air.

It has been a long slog to recovery after Haiti’s earthquake almost four years ago. Thousands remain in provisional housing of plywood, tarps, and corrugated metal. New lodging is being created, though. It’s just not all of the type you might expect.

Port-au-Prince is experiencing a building boom in luxury hotels.

Is high-end hotel development a good thing for Haiti? Reporter Amy Bracken will be answering your questions and responding to your comments below until 9 p.m. EST on Monday, Nov. 25.

There is the Royal Oasis, which bills itself as Haiti’s first five-star hotel. The general manager, Jean-Marc Rousseau, shows me a suite with two rooms, two TVs, and a dramatic view of the mountains. I notice a gleaming white building below. “It is The Rancho,” he says. “Our new competitor.”

The El Rancho is another luxury hotel — an old, long-closed hotel rebuilt and expanded under new ownership. With fountains and a pool, it looks like a whitewashed Arabian estate. The place has just had a soft opening, the suites with cocktail party-sized balconies on special at $400 a night.

And then, up the road, there’s the Best Western Premier. It has a bar at one end of the lobby and a spa at the other, where you can indulge in heated stone massage, body waxing, and reflexology. This is the first American hotel chain to operate in Haiti in 15 years, soon to be followed by a Marriott and a Hilton.

Kesner Pharel, a Haitian economist and investor in the Oasis, says one reason for all these new hotels is simple. “After the earthquake, we had so many people coming to work in Haiti, and there was no room.”

But consumer demand is not the only driver of this building spree. The Haitian government has been encouraging it as a way to develop the country economically.

Leaders say the hotels are good for regular Haitians — that the economic benefits will trickle down, and that's why the government has provided incentives like tax breaks.

Private foundations have also helped to build hotels. The foundations of former US presidents George W. Bush and Bill Clinton have invested millions of dollars and facilitated deals. The Clinton Foundation says it supported the new Marriott to “[generate] opportunities for Haitian small businesses and entrepreneurs who will be able to supply goods and services” to the hotel.

“Many people, many investors, wanted to not only change the image of Haiti, but really wanted Haiti to progress and be visible on the map,” says Sacha Perez, Best Western’s sales manager in Haiti. “And the only way we can do that is to build hotels so we could attract more people to come to invest.”

Borrowing a slogan you hear often in post-quake Haiti, Perez says that luxury hotels send a message: “Haiti is open for business.”

The View from Next Door

But in the very poor neighborhoods that surround the hotels, not all of the residents are happy about this kind of development.

“Have these big investments improved our living conditions through job creation? We say, ‘No,’” says Choisy Cilome, a community leader in Jalousie, a neighborhood with a view of several of the new hotels. “The government has a responsibility to provide us with the necessities, such as drinking water. And I still don’t see how our problem accessing drinking water is being addressed.”

Government officials say they have big urban renewal plans for Jalousie, including addressing its water problems. But in the meantime, they argue that the economic activity spurred by the hotels is exactly what the country needs for long-term development.

Whatever the broader effect of the hotels on Haiti’s economy, another question remains: Will they succeed as businesses?

The hotels aim to attract not just business clients, but also Haiti’s diaspora — a population with a variety of reasons for coming back. One hotel guest I met at the Oasis, Haitian-American fashion designer Dayanne Danier, comes to Haiti every year to perform charitable work. And when she comes, she says she needs certain amenities to stay connected with her busy life in the US.

“I need to be able to be online and WiFi and the whole nine yards,” Danier says. “So that’s one thing about Oasis that I love, because I can be in bed and on the computer.”

In order to keep drawing people like Danier, hotel owners are banking on Haiti maintaining its current state of relative stability.

Yet if that stability doesn’t last, Haiti’s hotels may still do well, filling up with a different sort of clientele — security and aid workers who would be in the uncomfortable position of living large, while they serve the needy.