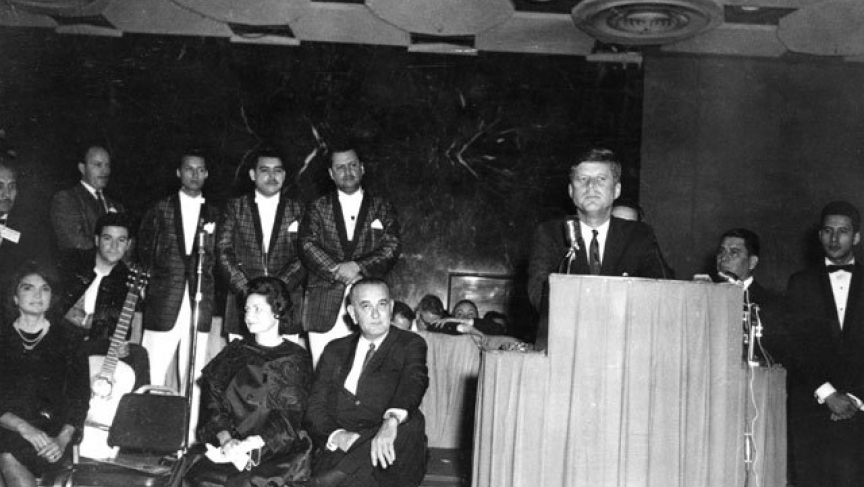 President John F. Kennedy speaks to a group of Latinos at the Rice Hotel in Houston, Nov. 21, 1963, the evening before he was killed.

In 1963, a group of Mexican Americans in Texas had a crazy idea: Let’s invite the president of the United States to meet with us.

Some reasoned that maybe he’d come, after all, he owed them. In 1960, Latinos had formed “Viva Kennedy” clubs, and their support in Texas helped Kennedy narrowly carry the state in the presidential election that year.

“We had bets going [that] he wouldn’t show," says Frank Urteaga. “And the more the Secret Service folks starting coming around, and so on, we said, ‘Hey, maybe there’s a chance that he’s going to show.’ And then, lo and behold, there he was.”

Urteaga was, and still is, a member of LULAC, the League of United Latin American Citizens. It organized the evening with Kennedy 50 years ago — on Nov. 21, 1963 — at the Rice Hotel in Houston.

“The feeling, maybe about the best word I can think of, it was electric,” says Urteaga, who is also an engineer. “Some of the things that [President Kennedy and his wife Jackie] did, reaching over to the players in the band and shaking their hands, gee, he was like one of us. And he just mingled, without any fear, there was no fear whatsoever. It’s, ‘Hi, how you doing, etc.’ Just extremely friendly, extremely friendly.”

“It was 20 minutes that they were there with us, but it’s really one of the greatest 20 minutes of my life that I have ever experienced,” says Lupe Fraga, then a 27-year-old entrepreneur in Houston who was also in the room that night.

“So we waited and waited, and finally they came down. President Kennedy gave a 17-minute speech, just really had the people roaring and excited. This man, I remember the way that he could articulate and just speak to a group was fascinating. And then, Jackie speaks to the group in Spanish and that really got the floor rocking.”

Urteaga adds there was some suspense when she started speaking and he was thinking, “OK, I wonder when she’s going to maybe bump her toe."

"It was beautiful," says Urteaga.

The Kennedy appeal for Latinos was also helped by a shared religion — the Kennedys and most Latinos were Catholic.

Hours after Kennedy met with Urteaga and the others in Houston, he was dead. Urteaga says it was like a family member had died.

“Goodness, go to church, and we would light candles to him, like we would normally do for our own,” he recalled.

A half century later, President Kennedy remains an icon in many Mexican-American homes, especially for older residents.

“The regular person out there still has Kennedy on their little altar at home, along with the Virgin of Guadalupe. It’s still there,” says Jose Gutierrez, a political scientist at the University of Texas at Arlington.

Gutierrez wasn’t there the night before Kennedy was killed, but he volunteered with the Viva Kennedy clubs as a Texas teenager in 1960. The clubs raised money through bake sales and dances, so people would have the $1.75 to pay their poll tax, common in the South back then. Gutierrez says most Mexican Americans had never been motivated to pay the tax before Kennedy.

“For a poor Mexican, they could buy a whole 100-pound bag of Russet potatoes and feed the family for at least two or three weeks, as opposed to this, to vote for a fat 50-year-old white guy,” says Gutierrez. “So this was a real choice, we’re going to go vote for this guy, because he seems to be like one of us, even though his name was Kennedy.”

And while Latinos celebrated Kennedy’s election, many would become disappointed in the years that followed. Many had hoped, for example, that Kennedy would appoint more Latino judges and make other Latino political appointments.

Gutierrez says, “It’s horrible to say, but the best thing that happened was that he [Kennedy] did die and Johnson then became a 180-degree different person, from an arch-segregationist voting against every civil rights measure to being the champion next to [Franklin] Roosevelt of helping minorities.”

Gutierrez adds that he doesn't know if Kennedy could’ve achieved as much as President Johnson did.

That’s the academic perspective. Many older Latinos, like Fraga, don’t care about that.

“Yes, [Kennedy] was not a very good person as far as getting legislation passed. But I think, as a leader, Kennedy eventually would’ve done it. I think his heart was in the right place," he said. "We had felt that people were not listening to us, but when he came to speak to us, we felt empowered, we trusted him, we believed in him. Kennedy that day really struck a chord. I often wonder, had he lived, what our world would be like today.”