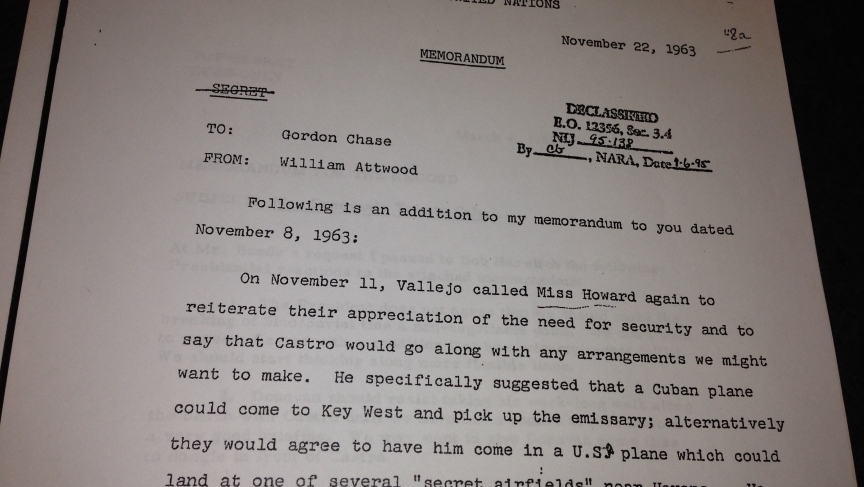 A declassified memo documents plans for Cuban leader Fidel Castro to meet secretly with a US envoy. It's dated the very day of JFK's assassination.

Everyone knows that President John Fitzgerald Kennedy was against communism. He presided over the failed Bay of Pigs invasion and the Cuban missile crisis.

But at the time of his death, Kennedy was actually trying to negotiate a reconciliation with Castro.

"Kennedy emerged from the Cuban missile crisis, I think, understanding that our policy of aggression towards Cuba could be very dangerous in the Cold War," says Peter Kornbluh. Kornbluh directs the Cuba Documentation Project at the National Security Archive at George Washington University, and is working on a new book provisionally titled, "Talking with Cuba: The Hidden History of US-Cuban diplomacy."

"In the spring of 1963, the Kennedy administration began a series of ultra-secret contacts with Cuba through a series of emissaries," Kornbluh explains. Kornbluh has reviewed a "voluminous file," declassified at the Kennedy Library, and also obtained a host of other documents, including recordings of conversations on the topic at the White House.

Kennedy was interested in detaching Cuba from the Soviet orbit. And Castro was interested in exploring options, since he was angry at the Soviets for withdrawing their nuclear weapons from Cuba at the end of the missile crisis, without even consulting him.

The first emissary was a New York lawyer, James Donovan, who was secretly engaged by the US government to negotiate the release of the exiles captured during the Bay of Pigs invasion. Castro released the prisoners as a sign of goodwill in early 1963 and raised the idea with Donovan of more wide-reaching negotiations. Donovan passed the baton to a glamorous young ABC reporter, Lisa Howard, who was introduced to Castro by Donovan.

She used her New York apartment as the venue for some 'cocktail diplomacy.' She invited the head of the Cuban mission to the United Nations, Amassador Carlos Lechuga, to a party, along with senior US diplomat William Attwood, who happened to already know Castro and was coincidentally serving as deputy US ambassador to the UN. Attwood got clearance from the White House to go, and the talks snowballed from there.

The secret intermediaries got so far as to set up a secret meeting between Castro himself and Attwood. The logistics of the meeting were arranged and Castro's proposed agenda was en route from Havana to the UN Cuban mission in New York at the very hour Kennedy was shot. Attwood, at Kennedy's request, was to quit the foreign service, to provide plausible deniability in case news of the meeting leaked. But all these steps came to naught the moment Kennedy was killed.

His successor, Lyndon Johnson, did not want to appear soft on Cuba in the run-up to the 1964 election.

Castro was meeting with a French journalist, Jean Daniel, when an aide rushed in with news that Kennedy was shot. Daniel was yet another of Washington's secret emissaries. He was updating Castro on the proposed talks and the Cuban leader seemed very excited by the prospects. Then they got the news, and Castro turned to Daniel and said, "There goes your mission of peace."