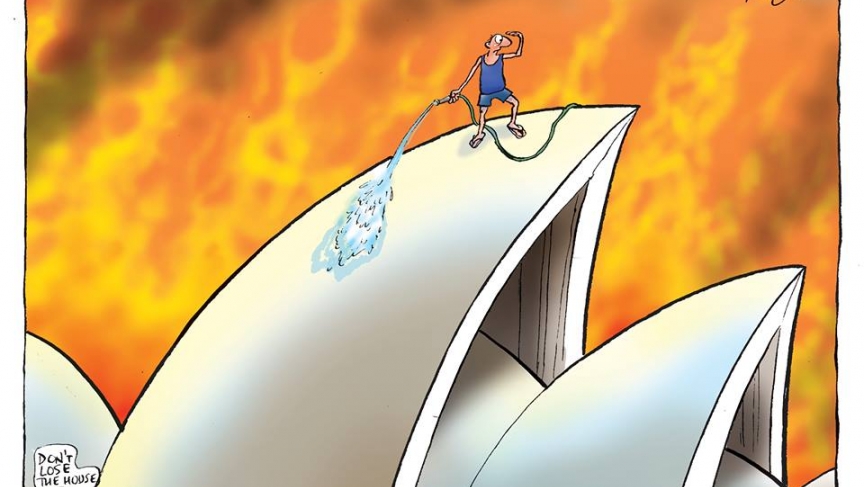 Australian cartoonist Mark Knight captures the scene in Sydney. A thick pall of smoke, from the fires in the Blue Mountains west of the city, hovers over the country's most famous landmark: the Sydney Opera House.

The smoke has cleared at the Vatican, so to speak, over the case of Bishop Franz-Peter Tebartz-van Elst of Limburg, Germany.

The high-flying bishop may have piety and celibacy down pat, but there’s also the tricky  business of humility. He's now been suspended, pending further investigation of his lavish spending habits. Perhaps the $42 million renovation bill should have been a clue he was on the wrong path.

The BBC has a report. 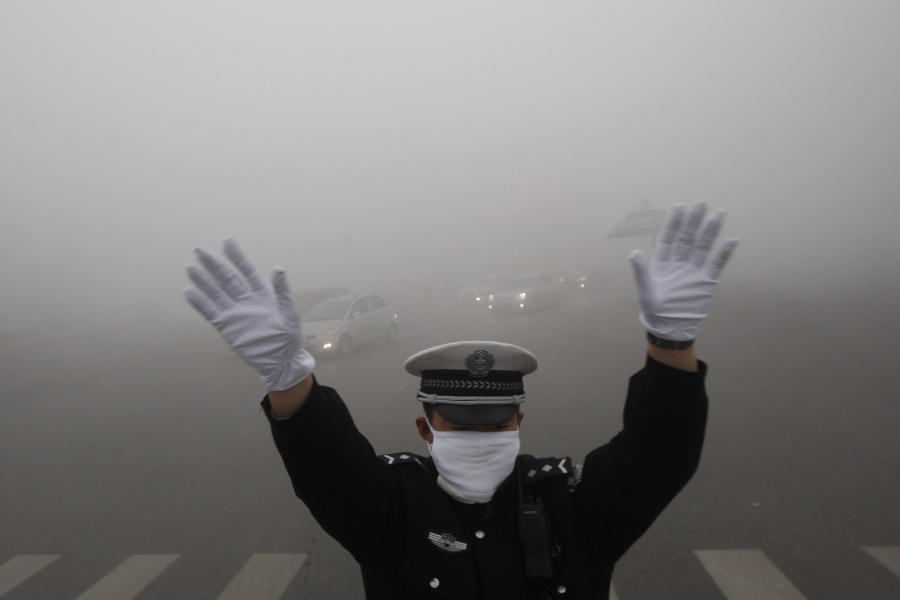 A traffic policeman signals to drivers during a smoggy day in Harbin, Heilongjiang provinceearlier this week. The city largely shut down because of the pollution.

Terrific photos, thanks to the haze

“You can’t see your own fingers in front of you.”

Harbin is one of many Chinese cities plagued by lethal levels of air pollution. This week, the city has been effectively closed for business, due to the intense smog.

For photojournalists, however, the haze has led to some eerie and beautiful images of a city where almost nothing can be seen, published in the Global Post.

Anders Kelto of PRI's The World examines the strange and moving history of the South African national anthem — which was a musical mashup of South Africa's apartheid past and its resistance movement. You can try your hand at creating anthems from mashups, by joining our Mashional Anthem contest. Just log onto PRI.org for details.

A vegetarian piranha and a purring monkey?

The International Business Times has the latest on the strange and marvelous animal oddities recently discovered in the Amazon rainforest. The World Wildlife Fund has been profiling some of the creatures recently uncovered.

“Remember: The first bird to take flight is the first to get shot.”

The New Yorker profiles Wang Gongquan, China’s unlikely new dissident, who is more at home with start-ups and social media than sit-ins.

Bet you didn't know Sriracha is made in CA & its secret is... RT @CapRadioDevin: .@pritheworld now, Sriracha. Discuss http://t.co/LuLcWMQE8b

As the cartoon shows, Australia has been ravaged by wild fires in recent weeks. While Sydney is safe for now, as the Sydney Morning Herald reports, the fires continue to rage.