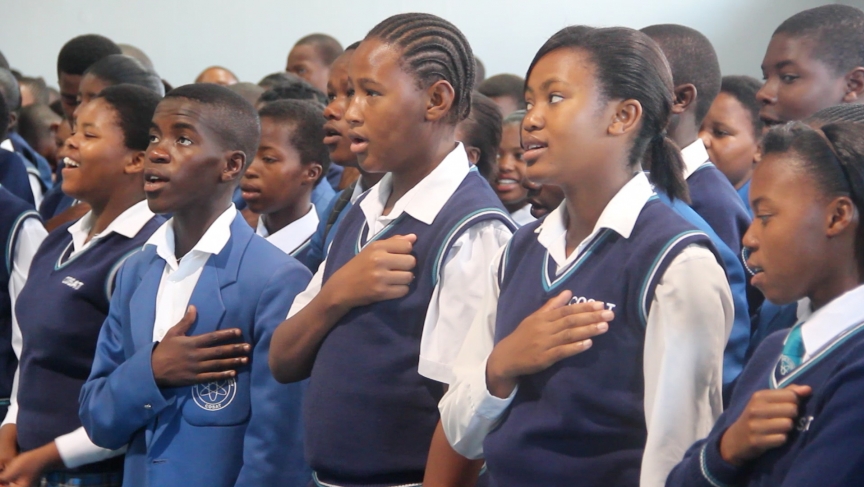 For a year, I've been covering a remarkable public school in a poor township of Cape Town in South Africa. And every Monday morning, when students at the Centre of Science and Technology (COSAT) sang the national anthem, it struck me that there was something odd about the song.

The first half is beautiful – with rich harmonies and a peaceful, distinctly African sound.

Then, right in the middle, it changes abruptly. It becomes a triumphant march – very European. I wondered, how did these two different tunes get mashed together?

South African National Anthem sung by students at the Centre of Science and Technology (2013):

I asked Tandie, a twelfth-grader who leads the national anthem at COSAT.

“I don’t know why they designed it that way,” she said.

I talked to a few other students, and they didn’t know, either. So I decided to find someone who did know the tale. I met with Paul Tichmann, a curator at South Africa’s National Museum in Cape Town. He said the story behind the national anthem starts a century ago with a song called Die Stem van Suid-Afrika – The Call of South Africa.

“Interestingly, it was actually written as a protest,” Tichmann said.

The lyrics, taken from a 1918 Afrikaans poem, speak of the deep connection between Afrikaaners (South Africans of Dutch descent) and the South African land, with its beautiful mountains and waters. The song was popular among Afrikaaners who, in the early twentieth century, resisted British rule.

A few decades later, in 1948, an Afrikaans political party gained control of South Africa. It imposed significant changes on the country, including apartheid – the system of racial segregation. The new government made Die Stem the official anthem of this segregated republic.

But black South Africans did not consider the song their anthem.

“It was perceived as the anthem of the oppressor,” Tichmann said. “For most black people, that was the feeling.”

An opposing song for black resistance

As apartheid marched forward, a black resistance movement was growing, and it also centered around a song – one that dated from years before.

The song was Nkosi Sikelel’ iAfrika – God Bless Africa. It’s an old African hymn that was well known throughout the continent.

Tichmann said the song began as a religious hymn – a plea to God for help and peace – but soon it took on political meaning.

“It was taken up by all the organizations involved in the struggle against apartheid,” he explained. It was sung at churches, rallies, and protests – in South Africa and across the continent. Black political groups, like the African National Congress, embraced the song.  When Albert Lutuli, president of the African National Congress, won the Nobel Peace Prize in 1961, he famously ended his acceptance speech in Oslo with a passionate rendition of the song.

By this time, Nkosi Sikelel’ iAfrika was the song of the African struggle. When apartheid ended in 1994, many argued that the song of black resistance should become South Africa’s new national anthem, but Nelson Mandela and other leaders felt otherwise. They decided it should not replace Die Stem – the apartheid anthem – but be combined with it.

Paul Tichmann said the decision was controversial but had powerful symbolism.

But some of the lyrics in Die Stem were problematic. They talked about Afrikaaners fighting and dying for the land – land they had seized from Zulus and other black South Africans. It was clear that those lyrics could not be included.

“It would just be a reminder of aspects of our history that were quite painful,” Tichmann said. So the offensive references were dropped.

Then there was the question of what language the anthem should be sung in. South Africa has eleven official languages. Mandela and others decided to include five of them: the three most common native languages – Xhosa, Zulu, and Setho – plus English and Afrikaans. (Note: Some scholars have suggested that the Setho portion of the national anthem comes from a song called Morena Boloka, which was merged with Nkosi Sikelel’ iAfrika.)

Initially, attitudes toward this merged, multilingual anthem were lukewarm, particularly when it was sung at sporting events and public gatherings. “The first part, from Nkosi Sikelel’ iAfrika, would be sung with great vigor,” Tichmann said. “Then it would [get quiet] when you get to Die Stem.”

But what does the current generation, born in a free South Africa, think of the national anthem?

Back at COSAT, the high school near Cape Town, I found a few students who knew the history of the song.

“I think it really combines the nation – combines its languages into one,” said Palo, an eighth-grader. “It makes it feel whole.”

Pumela, a senior, said she likes what the song stands for – and she much prefers it to the old, apartheid-era version.

“The old one was for one side, whites only,” she said. “This one is for everyone.” Here's a remix challenge: South Africa's national anthem is a mix of two songs. We want to hear how you'd remix songs into an anthem of your own. Mash up a national anthem from this list, or any you can find, with another, or with any other music, and upload your creation to our SoundCloud dropbox by Oct. 29. The best may wind up being played on-air and all submissions will be available on PRI.org.

Watch a short clip of Lerato, a student at COSAT, talk about her love of South Africa's national anthem.