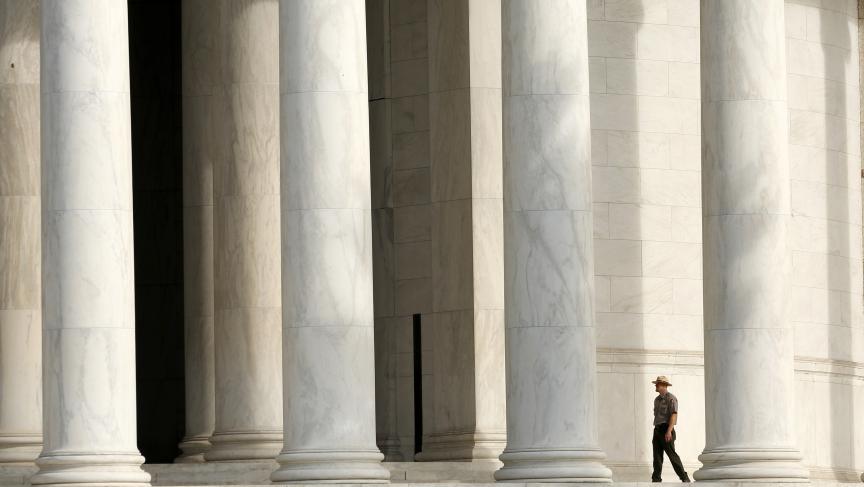 A National Park Service ranger walks the Jefferson Memorial in Washington Oct. 17, 2013. The White House moved quickly early on Thursday to get the US government back up and running after a 16-day shutdown.

Many Kenyans are horrified by the political game that just finished in Washington. Few can understand how, or why, the Tea Party would gamble with the financial stability of the US.

"This is playing with the faith and credit of the United States of America. It's not about a single party. It's about the USA. And if you look at it from that way, it's just not patriotic what's going on. It's not in the national interest what's going on. And they should put up or shut up."

Satchu feels the Tea Party is living in a time capsule, and doesn't understand just how interconnected the world really is right now.

"If you're borrowing trillions of dollars from the rest of the world, and then you're telling people to butt out when they are forced to watch 14-plus days of complete farce, I think it's a little bit rich."

He says this level of dysfunction would never be seen out of China. China has become a major player in African development. The Chinese are making huge sums of money available to African countries like Kenya. And Satchu says when many African presidents dream their big dreams, they head to Beijing to try and make them a reality.

Satchu says China's influence and investment in the region is old news. But it will be interesting to see how US and Chinese influence plays out in the short, medium and long term.

He thinks the US can rebound from this embarrassment, since political dysfunction is something African countries understand. But if instability and shutdowns become the new normal in Washington, then he believes partnerships between Kenya and China will surely increase.