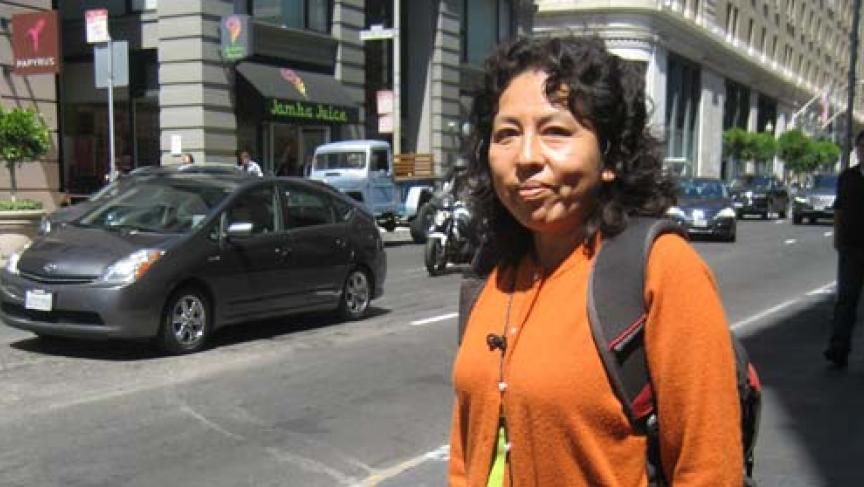 Lourdes Alarcón is getting her college degree, despite challenges that come with also being a mom.

In other words, she isn’t a young person who went straight to college after high school. Originally from Bolivia, she is a thirty-something mom raising two kids — a seven-year-old boy and a five-year-old girl — on her own. And by the end of 2013, after four years of personal sacrifice and hard work at San Francisco State University (SFSU), she’ll also be a college graduate.

Alarcón’s success was spurred by disappointment. Five years ago, she lost her job as an assistant principal at an elementary school in San Francisco, and subsequently had difficulty finding a job that would pay her enough to support a family in one of the country’s most expensive areas to live.

“My options were to [either] go to college, or take any job,” Alarcón said. “I preferred to study to get ahead and provide a better future for my kids. My dream has always been to be a teacher.”

Non-traditional students, especially single working mothers like Alarcón, face a number of unique barriers in their quest to become professionals, none larger than childcare. In Alarcón’s case, taking advantage of the daycare program at SFSU wasn’t an immediate option — as of July 2013, there were about 200 families on the waiting list for SFSU daycare, according to Erica Almaguer, one of the coordinators of the university’s Early Childhood Education Center.

“Colleges are designed for young people without kids,” said Alarcón. “That’s why there often isn’t enough support for parents.”

Advocates say there are several things that universities could do to better support their “non-traditional” students. Those include help with transportation, flexible class schedules and childcare.

Unable to pay for private care, and too far down on the wait list for SFSU’s daycare program, Alarcón was forced to find solutions within her personal network. Three people, including her father, care for the kids while she goes to school. That means several hours a day spent transporting the children from one place to another, a job made more difficult by the fact that Alarcón relies on San Francisco’s public transportation system.

“I [can] drive but I don’t have a car, because finding parking is almost impossible and is really expensive here,” Alarcón said.

Government programs are less expensive, but even then, demand is often greater than the supply.

“There are thousands of families eligible for subsidized childcare that aren’t getting it,” said Nancy Remley, policy administrator at the California Department of Education’s Child Development Division. “Now, we have no idea how many families are on the waiting list. A few years ago, we had a centralized list for each county and there was a total of 200,000 children on the list.”

The federal government allocates $5 billion per year to fund childcare and development programs, in addition to state subsidies that vary in amount. Today, about 1.6 million children benefit from federal childcare subsidies, but it’s not enough, says Helen Blank, director of childcare and early learning at the National Women’s Law Center. Blank calls the government’s inability to meet the childcare needs of families “outrageous.”

And even if mothers can get government help, many find applying for and keeping the subsidies difficult and confusing. That was true for Jennifer Maldonado, who began her studies in public policy this fall at Mills College in Oakland, California. After spending two years on the waiting list to get childcare subsidies, she was told her family didn't qualify because her husband is studying to get a master’s degree.

“I don’t understand why they denied us help. On the one hand, the government wants people to get ahead, so they will no longer need financial aid. But on the other hand, they are holding us back if they don’t help us,” said Maldonado, who was born in Nicaragua and has lived in the US since she was little. She has two daughters, ages 2 and 4.

Alarcón from SFSU, who does receive a childcare subsidy, says it would have been impossible to continue her education without it.

Richard Fry, an economist at the Pew Research Center, said he's seen progress when it comes to the education of Latinos over the last 30 years, but there is still a sizeable achievement gap between Latinos, non-Hispanic whites and Asian-Americans in education.

“The real prize for Latino students would be graduating from college,” said Fry. He pointed out that about 29 percent of Latinos between 20 and 30 years old have not finished high school. And close to 90 percent of Latinos in the same age bracket don’t have a college diploma. “It’s something really troubling,” he said.

According to Fry, in recent years, non-profits, policy experts and academics have identified two things they think could raise educational attainment among Latinos.

First, we can provide them with more information about how college works, and its importance. “A lot of immigrants don’t know the educational system, and so they can’t help their kids when they go off to college," Fry said. "And that puts those students at an academic disadvantage compared with other groups of students.”

Second, we can improve access to early childhood development programs.

President Barack Obama’s budget proposal for fiscal year 2014 includes an initiative that would invest $75 billion over the next 10 years to expand public preschool programs for 4-year-olds.

Blank, of the National Women's Law Center, acknowledged that the president’s initiative is “a good step, but it doesn’t solve the needs of all moms.” That’s because there are a lot of families that need childcare for babies and toddlers under the age of four. Only $1 billion of the president’s proposed budget would be allocated for that population. The proposal hasn't been approved by Congress.

Mary Ignatius, coordinator of Parent Voices in California, pointed out that immigrant mothers are often left to devise their own solutions to the challenges they face as college students. In 2007, for example, a group of mothers, including some from Parent Voices, fought to create a parent resource center at Mills College. The impetus came from a student, Maricruz Alvarado, who founded a club for moms and discovered students like herself needed a shared space for their families on campus.

“At Mills, they had study halls for different kinds of students, but not for parents. So for more than a year, we fought to get them to recognize us and give us a place where we could bring our kids while we were studying or doing homework,” said Yen Do, one of the founders of Mills Parenting Lounge.

In 2012, another group of moms, from Parent Voices in Sonoma, met to talk about how much stress they were under as a result of final exams. “The moms decided to meet at a park on the weekends and share childcare duties. One group cared for the kids while the others studied, and vice versa,” Ignatius said.

Meanwhile, the latest trend in child care are co-ops — schools and daycare centers funded by the parents themselves, said Twiggy Damy, who has worked with groups of parents in different non-profit organizations around the Bay Area. “Parents take turns and volunteer a certain number of hours. These programs have become a much more economical option than daycare centers or private schools,” she said.

Motivated by the kids

These moms all said their primary motivation for going to college was their children — the desire to be role models and provide them a better future.

Wendy Monroy Gómez, who lives in Sacramento, took a two-year nursing assistant course but now wants to go to college to get certified as a midwife and nurse. “I do it for my kids, but also for myself, because I want to be better educated. I don’t want 40 or 50 years to go by and be stuck doing the same thing,” explained the 27-year-old Mexican mother who has lived in the United States since she was a child.

Economic need is also a major factor. Ignatius from Parent Voices said the economic crisis that hit the United States in 2008 prompted a number of parents in her organization to go back to school. “When they found themselves unemployed, they decided to enroll in college, so they could succeed in an increasingly competitive job market,” she said.

According to the Department of Labor, unemployment among US Hispanics reached 9.4 percent in July 2013 (nearly double the Hispanic unemployment rate in 2006, which was 4.7 percent). That translates to 2,366,000 Latinos who are out of work. The national average for unemployment is around 7.4 percent.

The desire for self-improvement and the importance Latino families place on education, according to the Pew Research Center, is another factor that motivates Latinos to go to college. A 2009 Pew survey found that 88 percent of Latinos over 16 thought they needed a college degree to get ahead in the US.

This article was made possible by New America Media's Women Immigrants Fellowship. This article can be read in Spanish at BabyCenter.