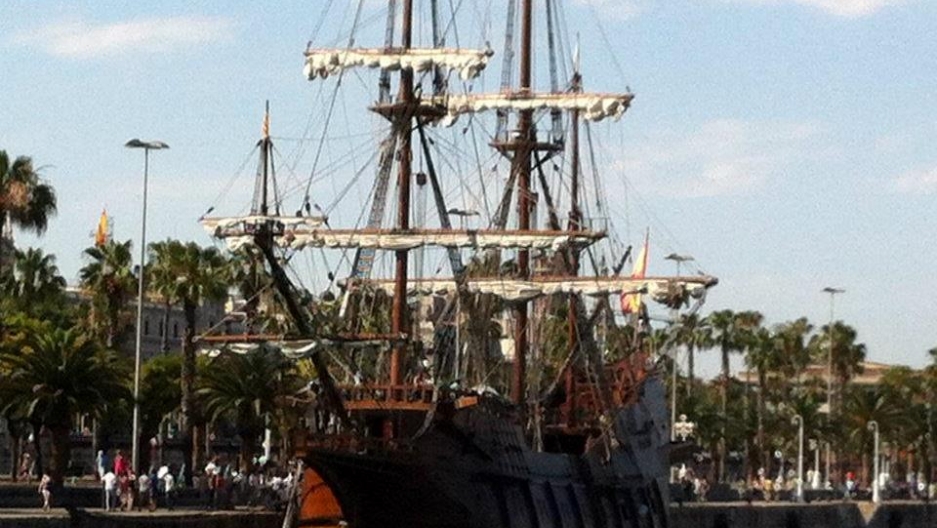 A Spanish galleon, a warship of the kind that linked the vast Spanish empire during the age of sail. This is the 'Andalusia', a reconstructed galleon photographed during a visit to Barcelona in 2012. Paying for warships like this helped bankrupt the once-great Habsburgs.

Barring a last minute deal between Congress and the White House, the US will likely default on its debts. Possibly by the end of this week.

This will be the first US default since 1814, when interest payments were suspended because of the burning of Washington by the British. Most everyone agrees default is a bad thing. The question is, how bad?

There have been hundreds of sovereign debt defaults by governments across the world over the last few hundred years. But not that many by economic superpowers of the stature of the United States. For that you have to reach way back, say 400 years, to the time when Spain was the world's economic, political and military powerhouse.

Fuelled by silver from Mexico and Peru, and supported by an outstanding modern bureaucracy and innovative military, Spain dominated the world. It monopolized trade in the Pacific and Indian Oceans; it dominated trade in the Atlantic world. By marriage, the Habsburg family controlled central and southern Europe. They even could decide who was to be Pope. From Manila to Mexico City, from Mumbai to Milan, from Antwerp to Vienna, Naples and Lisbon; all bowed to the will of the Habsburgs.

So what goes wrong?

"They run into pretty much the same problem as any global superpower," says Geoffrey Parker, professor of history at Ohio State University in Columbus. "Imperial overstretch."

The Habsburgs were almost constantly at war.

"You can get away with spending more than you make for some of the time. But you can't do it for all of the time," says Parker.

In terms of lessons for modern America, Parker says "don't start a war." He believes the root of the current fiscal problem was the failure to properly fund the wars in Iraq and Afghanistan.

"Amazingly, Spain continues to find bankers" to lend it money, despite the repeated haircuts, Parker says. "It's hard for lenders to admit they've made a terrible mistake," and write off their investments entirely. But the defaults ruin bankers and leave the realm paying more in interest on the money it borrows, and led to the progressive weakening of Spanish power until the nation was seriously marginalized.

"It is just incredulity that the greatest power in the world, cannot get its act together," he said. "To link the default on sovereign debt, something which really does tarnish a country, to a particular piece of legislation that has already passed: I don't think anyone outside the United States can understand that. How we could be holding the economy of the world to ransom, in return for some concessions on a piece of legislation that has already passed.  What is there still to discuss? That's what I think the rest of the world can't understand. And I think one year, 10 years, 100 years from now ... that will still be something which is very hard to understand."

As a final thought, just to give you a sense of the power of Spain, here's what you might find on the business card of perhaps the greatest Habsburg, Charles V, who died in 1558.