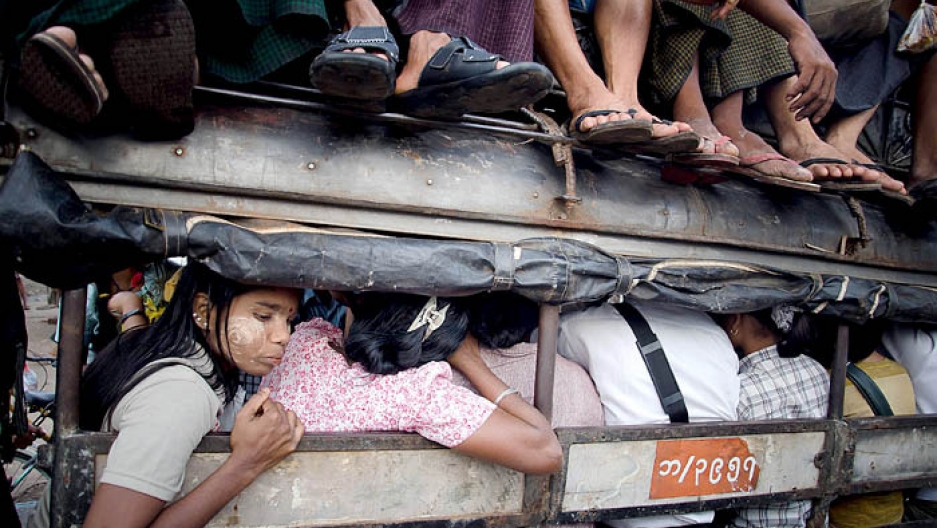 People cram onto a crowded bus in Dalah, Myanmar, in 2011.

Award-winning photographer Geoffrey Hiller first visited Myanmar in 1987 and was ‘haunted’ by what he saw.

"After a frenetic trip, it wasn’t so much the monks and pagodas that haunted me, but the faces of the Burmese, painted in white, often smiling," he recalled recently. "I wanted to find out more about who they really were, plagued by a corrupt government and international sanctions."

He's since returned to Myanmar several times and witnessed the changes that have taken place in the country since its military rulers have gradually eased restrictions and opened up to the outside world.

"I returned yet again in 2013," Hiller said. My camera focused on capturing daily life, from the cramped streets of the colonial capital of Yangon, to dusty markets in Mandalay, to Muslims in Meikhtila, and river life in Pathein.

"The face of Yangon has already changed, with new building construction and imported cars," he said.

Hiller hopes to publish a book that would include his photographs in Myanmar from 1987 through the recent historic transition. He's hoping a Kickstarter project will help him fund the book.

The book, Burma in Transition, would also feature photos of Meiktila, which Hiller visited before anti-Muslim riots erupted there earlier this year.

"After my experience in this peaceful town, the news reports about the fighting and killing and burning of homes is unbelievable to me. I had talked with dozens of residents of Meiktila, both Buddhists and Muslims, and I never would have guessed such violence would erupt," he said.

Read more at Global Voices Online, where this article by Mong Palatino was originally published.