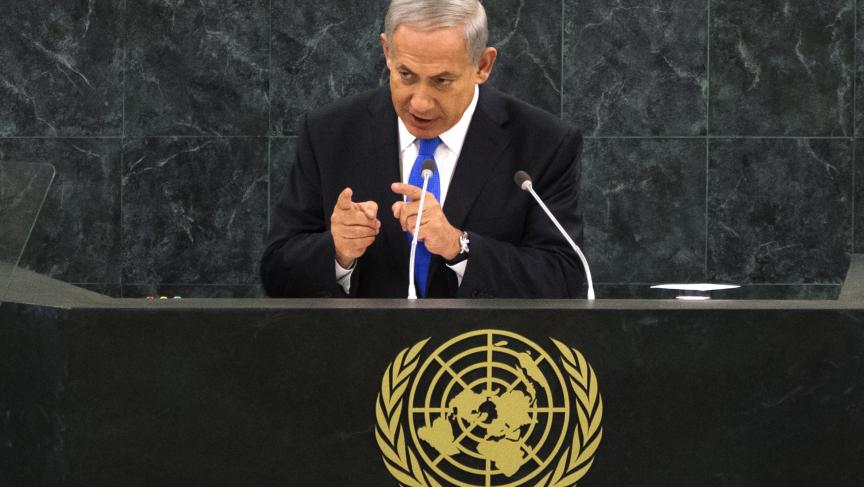 Israeli Prime Minister Benjamin Netanyahu spoke at the UN general assembly on Tuesday.  He says his motto is distrust. Iranian President Hassan Rouhani, he says, wants it both ways.

What Israel's leader and many Israelis think about Iran's new president is clear: they are distrustful. But every Sunday, one radio broadcaster in Israel asks Iranians to call in to his show to tell him what ordinary people in their country think.

For each broadcast, Menashe Amir sits in a studio at Israel's state radio station, puts on his headphones, gets really close to the microphone, and poses a question to his Iranian listeners.

"This Sunday, we asked whether you believe in Rouhani or not," said Amir, playing a recording of Sunday's broadcast.

He asks his Iranian callers to dial a German phone number he set up that directs their calls straight to the studio in Israel, circumventing the Iranian ban on calling Israeli numbers. He also asks callers not to say their names or their hometowns, so they don't get in trouble.

On the latest broadcast, one caller said President Rouhani has every right to continue the country's nuclear program. But Amir said most of the other callers think Rouhani is being kept on a tight leash.

One caller, Amir said, believes "there is a kind of cooperation and coordination between Rouhani and Khamenei and the Revolutionary Guard." They give him the orders, Amir quoted the caller as saying.

"Most people in our broadcast don't believe Rouhani," Amir said. "They emphasize he is part of the regime. If he has changed his tone, it's because the regime in Iran is in very bad economic shape. And they need the money from the international community, so they have to be nice to the others."

Israel is deeply skeptical about Iran's new leader and his overtures to the West, and believes Iran is developing nuclear weapons that threaten the existence of the Jewish state. Iran contends its nuclear program is peaceful.

In a speech to the U.N. General Assembly, Israeli Prime Minister Benjamin Netanyahu said Iranian President Hassan Rouhani "definitely wants to get the sanctions lifted, I guarantee you that. But he doesn't want to give up ... Iran's nuclear weapons program in return."

Netanyahu's speech was a vote of no confidence at a time when relations between the US and Iran have gotten closer. Amir said his Iranian callers share Netanyahu's skepticism. But he said the baby steps Iran and the US are making toward each other has his callers hopeful.

"They love the American music, they love the American culture," he said. "The United States is considered in their eyes a symbol of progress and comfort and so on. They want to be like America. They don't think whether the smile of Rouhani is real or false. The only thing they want is to put an end to the enmity and confrontation between two countries. That the Iranians could in the future fly to the United States and visit everywhere."

It is strange that ordinary Iranians would confide in a radio host from their archenemy, Israel. But Menashe Amir has a few things going for him. He grew up in Iran, and has hosted his show for more than 50 years. Iranians have known for decades that when they want to vent about their government, when they want to speak their mind, they can call in to the show, Amir said.

"Very frequently the ... Iranian governmental media accuse us of spreading lies in Iran," Amir said with a smile — because he loves the fact that Iran's leaders are actually listening. Even Khomeni, the founder of the Iranian Revolution, reportedly tuned in, he said.

Whether that's true, Amir believes other Iranian movers and shakers are listening. Senior Israeli politicians come on the show, too.

Though Iran has no dialogue with Israel like it has begun with the US, should Iran's leaders wish to start the conversation, they know what show to call.