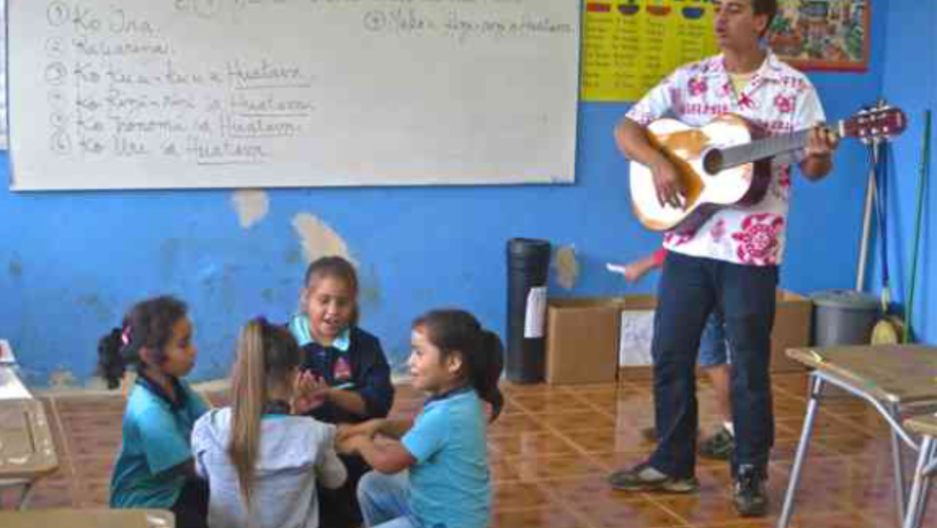 Islanders smile, sing and dance in polyester costumes to cater to the mostly Spanish-speaking spenders. Ever since Chile annexed Easter Island more than a century ago, the Spanish language has been chipping away at the Polynesian-based language called Rapa Nui.

But these tourists, fuelling the island’s economy, are also diluting the culture they came to see. Now, with only a couple thousand speakers left, the islanders are upping their effort to revive the Rapa Nui language.

Until the late 1990s, the Chilean government effectively outlawed the islanders from speaking in Rapa Nui. Any public sector job or office required knowing and speaking in Spanish.

Anything involving the schools, police or property rights was in Spanish too.

Even the great, great granddaughter of a Rapa Nui King, Alicia Makohe, grew up speaking Spanish. She taught herself Rapa Nui at 14.

“There were many Chilean rules here,” she said. “Everybody in the school (spoke) Spanish. (Rapa Nui) was always forbidden. Also the places for the laws, the police ... everything was ruled by the Chilean people.”

Chile changed its tune about 10 years ago — many say to protect the culture of one of its top moneymaking destinations. Chile stopped requiring Spanish in public institutions and it now funds new school programs, reading materials and music targeted at reversing the decline of Rapa Nui.

Thanks to these funds, every school on the island has at least one class in Rapa Nui.

Virginia Haoa teaches language class to second graders at the Lorenzo Baeza Vega School, where all classes from science to history are taught in Rapa Nui.

She said in a class of 30 incoming students, four speak Rapa Nui fluently. Six months in, most students handle the language well.

“This program is the only space where kids learn Rapa Nui, and it’s important for any people to maintain their language because it is their identity, their worldview, their spirit. It’s their soul,” Haoa said.

But away from the classroom it’s a different story. Nine-year-old Gabriel Milatuke, for example, is happy to chatter away in Rapa Nui indoors. But once he’s on the basketball court or in the playground, he switches to Spanish.

“They decided it’s better for them to speak Spanish because they’re going to go to school in Chile. They are going to be professionals there, and the Rapa Nui language is not going to help them. They think like that,” Makohe said.

But Makohe sings to her six-month-old son in Rapa Nui.

"I think the opposite because if you learn Rapa Nui then you have another language," she said.

But Haoa said the employment situation on Easter Island needs to change.

“We need government policies — something that promises children speaking Rapa Nui they’ll get a job tomorrow. Jobs need to demand that they speak Rapa Nui, not just Spanish,” she said.

But the chances are slim. For one, the language was only recently written down. It had a strictly oral tradition. But now that’s changing.

“I tried to sell the first issue, though it didn’t work very well, and people mentioned to me in the street, you know, ‘I can’t read it because it’s hard,’” Edensky said.

Circulation jumped after the Rapa Nui adapted their reading style.

“Some commented to me that they came up with the idea of reading it out loud to themselves, then they would understand,” he said.

A first dictionary is also in the works. One editor is linguist and Christian missionary Robert Weber. He and his wife Nancy Weber have dedicated more than 30 years to preserving Rapa Nui.

Robert Weber called Rapa Nui a complex language, full of expressions that can be tricky to define.

One example is hippi tiriti manaba, “which would literally mean a tucking or a tightening of the stomach,” Weber said. “That would to me mean that you’re feeling nostalgia or anxiety.”

In all likelihood, tourists will continue to flock to the island no matter whether Rapa Nui survives. But without the language, the islanders’ music and dance routines would turn into pure nostalgia.

Despite Rapa Nui’s shaky future, Makohe clings to her optimism. Makohe does her part by writing new songs with Rapa Nui lyrics and creating educational videos for school programs. She said she’s heard young islanders singing her songs in the streets of the island’s only town, Hanga Roa.

“Sometimes I speak to the little children, and they’re Chilean, but they speak Rapa Nui. It’s growing. It was going down, but now it’s coming up,” she said.

It’s difficult to imagine Rapa Nui coming back as a native tongue after its near-eradication. But it stands a better chance than it did a decade ago, now that young people speak it, and the Chilean government is backing the effort to save it.