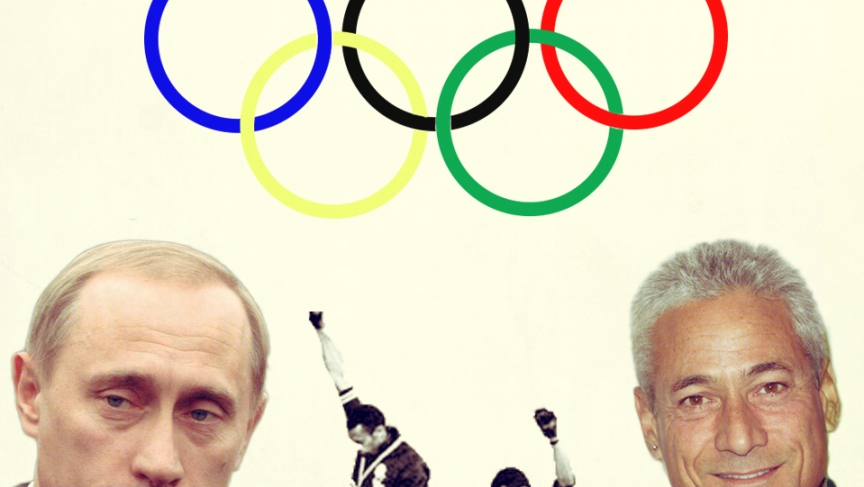 Russian President Vladimir Putin has cracked down on gay rights in Russia. (Illustration by John Wernecke)

Athletes from the United States boycotted the 1980 Olympic games in Moscow in protest against the Soviet invasion of Afghanistan.

Fast forward to present day, and a Russian government action has some Americans asking a similar question: Should we boycott the Olympic Games in Russia?

This time, however, the issue is Russia's stance on gay rights. A new law signed by President Vladimir Putin in June makes illegal open discussion or displays of homosexuality in the presence of minors in Russia. Both citizens and visitors are subject to jail time and fines for those found to be in violation of the law.

Last Friday, President Barack Obama said a U.S. boycott of the Olympics would be inappropriate and unfair to the athletes who've been training hard for the games.

"One of the things I'm really looking forward to is maybe some gay and lesbian athletes bringing home the gold or silver or bronze, which I think would go a long way in rejecting the kind of attitudes that we're seeing there," President Obama said. "And if Russia doesn't have gay or lesbian athletes, then that would probably make their team weaker."

Louganis, a member of the 1980 U.S. team who boycotted Moscow, said that gay Olympic athletes have an opportunity to bring messages to large groups of people.

"I think that Johnny Weir and Blake Skjellerup, they're a walking propaganda if they go to Russia and are able to compete," Louganis said. "Let them have that opportunity -- show the world who they are."

Robbie Rogers, the first openly gay male athlete to play professional soccer in the U.S., shared fond memories of his 2008 Olympics experience in a recent column published in USA Today. Rogers said he couldn't imagine supporting the boycott and preventing athletes from living the experience he did five years ago.

"I'd go. I'd make no secret of the fact I'm gay and I'd take every opportunity to let people know the truth about my life, which I've done since I came out this past February. And if I were a straight athlete, I'd go and take every opportunity to let people know that I support the rights of all people to live free from the threat of discrimination. After all, isn't freedom an Olympic ideal?" he wrote.

In a recent open letter to British Prime Minister David Cameron, British broadcaster Stephen Fry called for the games to be moved out of Russia.

"An absolute ban on the Russian Winter Olympics of 2014 in Sochi is simply essential. Stage them elsewhere in Utah, Lillehammer, anywhere you like," Fry wrote. "At all costs Putin cannot be seen to have the approval of the civilised world."

At the 1968 Olympic games in Mexico, John Carlos and Tommie Smith took gold and bronze in the 200 meters final. On the podium, the two raised their fists wrapped in black gloves as an orchestrated message of solidarity with black Americans. The men were expelled from the Olympic village for bringing a political message to an apolitical event, the International Olympic Committee said after the protest.

Louganis pointed to the fact that Carlos and Smith had their medals returned as a sign that opinions of protest actions can change with time.

"Change is hard, and a lot of times we don't recognize the value of certain people's actions until years later," Louganis said. "And it takes strength -- it takes courage."