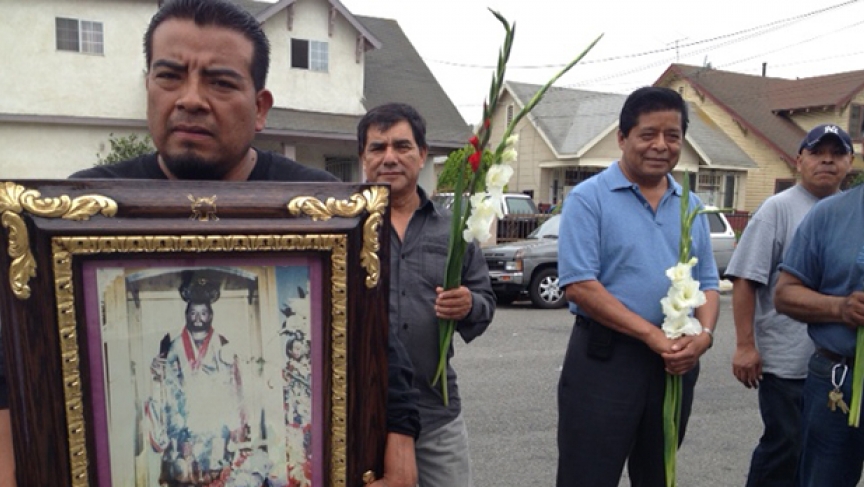 In Los Angeles recently, people from the small town of San Bartolome Zoogocho, located in the southern Mexican state of Oaxaca, honored their patron saint. (Photo by Ruxandra Guidi.)

It’s 6 p.m. on a Friday. About a dozen people gather inside a small office space in Los Angeles — in the MacArthur Park neighborhood, where many immigrants live.

Sitting around a circle, they recite words in Dizha’ Xhon, also known as the Zapotec language.

Aaron Huey Sonnenschein, a linguistics professor at California State University, Los Angeles, is leading the group, focusing solely on the sound of Zapotec words. It’s called the “phonics” method of learning. Sonnenschein adds it's a methodology that linguist Leanne Hinton, a professor emeritus at the University of California, Berkeley, has innovated. He said it works especially well with indigenous languages like Zapotec, which counts few native speakers.

The idea is to avoid the “years it would take to create a full language program and create one as we go along,” he said.

Aside from their Friday night meet-ups, the group in Los Angeles is creating a digital archive on Facebook featuring Zapotec words. It also has photos illustrating their meaning and their translation into English.

“My whole family speaks Zapotec,” said Morales. “My grandma would always say hi to me in Zapotec and I didn’t know what it meant. So I decided to learn a few words here and there.”

His mom, Celerina Montes, couldn’t be happier — or more proud.

“I’m really proud to be Oaxacan,” Montes said. “Of course, I’m also proud to be Mexican, and to speak Spanish.”

But, she adds, that with people who she knows speak Zapotec, she always bids them a good afternoon by saying “patir” rather than “buenos tardes.”

There are only about 400 people left there these days. On the other hand, Los Angeles is home to about 1,500 Zoogochenses.

“Most of us live here. We have a ghost town, basically, at home,” said Odilia Romero, director of the L.A.-based Binational Organization of Indigenous Communities. It’s hosting the Zapotec classes. “If the language was to be rescued, it would be here in LA. But if we don’t do anything about it, by 2050, it’ll be gone,” Romero added.

On a warm Sunday afternoon, Romero and more than 50 other Zoogochenses stand outside a home in South L.A., holding red gladiolus flowers. They wait for the brass band to start playing. Then, they march behind a framed 8-by-11 photo of an effigy of their patron saint, San Bartolome.

The photo is taken inside a home and placed on an altar, surrounded by incense and more flowers. The display is similar to the type of ritual done back in the Mexican village, with the original effigy.

With flowers in his hand, Ted Lazaro says this little procession is one way of keeping his village’s traditions alive. Speaking Zapotec is another.

“To say that you’re indigenous is a dirty word for many people still. It implies that you have no education,” Lazaro said. “But these days, our kids go to school and learn about many cultures, including their own. So now it’s the kids that talk to their parents and grandparents here, and tell them, 'Look, your culture is important.’”

Lazaro is a computer programmer by day. Lately, he’s spent evenings and weekends practicing Zapotec with his children and making traditional masks. On Aug. 24, dancers will wear those masks at a fiesta organized by people in Los Angeles with ties to San Bartolome Zoogocho.

It's something they have done in LA for nearly 45 years.