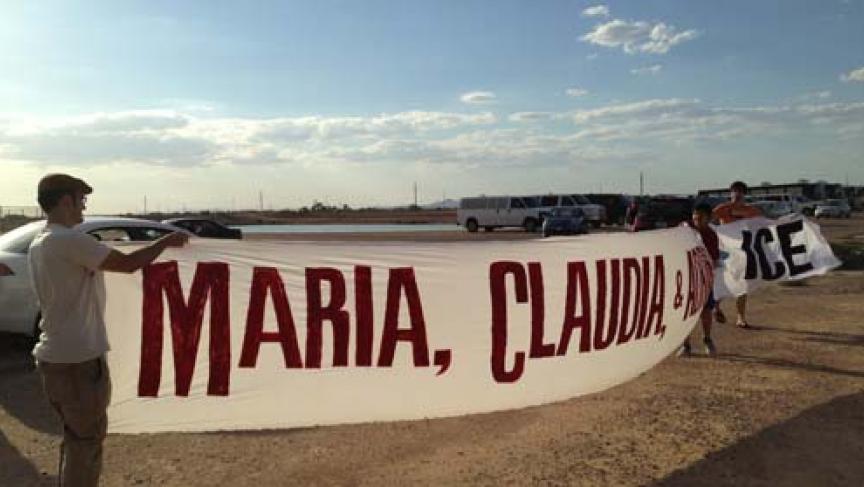 A banner in unfurled, containing the names of some of the Dream 9 who are in U.S. immigration detention in Arizona. (Photo by Valeria Fernández / New America Media.)

ELOY, Ariz. — From inside the tiny rectangular windows at the Eloy Detention Center, the Dreamers arrested in last week’s protest could see the long white banner outside that spelled their names in red letters: “Maria, Claudia and Adriana.”

Dozens of people have been demonstrating outside the detention center in support of the “Dream 9,” a group of nine undocumented immigrants who were arrested after taking part in a controversial action on July 22: They turned themselves in at the U.S. port of entry in Nogales, Ariz., asking for humanitarian parole to re-enter the United States.

As the House of Representatives debates long-term immigration reform, the group behind this unprecedented act of protest is shining a light on what they see as an immediate humanitarian crisis: the deportations and detentions being carried out by the U.S. Department of Homeland Security.

“We want their families to get back together,” explained Mohammad Abdollahi, a 27-year-old who volunteers with the National Immigration Youth Alliance (NIYA).

Abdollahi wasn’t part of the Dream 9’s action, but he has participated in other Dreamer protests and helped organize this one.

On July 22, nine Dreamers presented themselves at the port of entry of the border city of Nogales, wearing caps and graduation gowns, each of them accompanied by a religious leader.

They asked to be allowed back into the United States on humanitarian parole. When this was denied, they asked for political asylum. They have been held since then at the private detention center in Eloy.

The nine young people identify as Dreamers, or youth who were brought to the United States when they were minors and grew up in the country.

Three of them, Lulu Martinez, Lizbeth Mateo and Marco Saavedra, “self-deported” to Mexico in order to organize the action, after different circumstances forced the others to go to Mexico. Some of them went back to get an education they couldn’t afford in the United States; others went for medical care and one due to the deportation of a family member.

The strategy behind the Dream 9

Although the Dream 9 border action was the first demonstration of its kind, the strategy behind it has been developed over the last three years, explains Eileen Truax, journalist and author of the book “Dreamer.”

Truax followed members of DreamActivist.org and others in her book and was present during some of the first acts of civil disobedience as far back as July 29, 2010 in Los Angeles.

On that day, members of DreamActivist.org lay down in the street of a mayor intersection in Los Angeles, their arms joined together by tubes, to protest Arizona’s state immigration law SB 1070, which made it a crime to be undocumented in Arizona.

A year later Dreamers carried out a similar action in Alabama to protest that state’s immigration law, HB 56, which was modeled after the Arizona law.

“Each action has prepared them for the next one,” Truax said. “All the community saw that they were being arrested and saying, ‘I’m undocumented and I’m unafraid.’”

A few days later, the activists were released.

Their strategy is not without risk, but part of the “mystique” of the movement is that the organizers get involved in the actions themselves, and immigrants are speaking for themselves, said Truax.

According to Truax’s reporting, none of the Dreamers who participated in about 20 acts of civil disobedience over the past three years have been deported.

She said part of the reason has to do with their clever use of the so-called “Morton memo,” the 2011 guidelines released by ICE Director John Morton that urged his agency to use “prosecutorial discretion” to prioritize the deportation of certain individuals (for example, those who pose a risk to public safety) over others, such as DREAM Act-eligible youth.

In 2010, Lizbeth Mateo and Mohammad Abdollahi risked deportation when they participated in a sit-in at Republican Sen. John McCain’s office in Arizona.

Dreamers with the organizations NIYA and DreamActivist.org escalated their strategy in 2012, when they infiltrated the Broward Transitional Center in Pompano Beach, Fla.

That year Marco Saavedra was detained by the Border Patrol and took advantage of his detention to connect with other detainees and help bring attention to their deportation cases.

One of the central questions that Saavedra and other activists raised was whether the Obama administration was making use of prosecutorial discretion to spare the deportations of those with family ties in the United States and no criminal record.

The Dreamers, who have been in detention in Eloy since July 22, are doing the same: They are making phone calls and relaying information about other detainees’ conditions and cases to NIYA. But restricted access to phone calls led them to launch a hunger strike for a few days. Some of the participants were placed in solitary confinement, according to Abdollahi.

Immigrations and Customs Enforcement (ICE) has not commented on the cases of the Dreamers who were arrested, or the conditions of their detention, citing confidentiality laws.

“What we ought to be talking tonight is about the politics in the House and the Republican Party,” said David Leopold, an immigration attorney and former president of the American Immigration Lawyers Association (AILA). “But instead our focus is on this action, so it pulls away attention from the big issue, which is fixing the system so 11 million can get out of the shadows.”

Roberto Lovato, a political strategist for Presente.org, a non-profit that advocates for Latino issues nationally, disagrees. For Lovato, the conversation taking place in Congress right now distracts from the fact that this administration has deported close to 1.7 million people.

“You don’t have social change by keeping people comfortable. You have to escalate and escalation doesn’t mean putting a suit and tie on and lobbying corrupt politicians,” he said. “Escalation means raising the levels of audacity and courage within the movement.”

Leopold, meanwhile, says he sympathizes with the Dreamers’ cause and hopes they are able to stay, but he questions the planning.

“I don’t think it’s as simple to show up and say: ‘I’m here and I want to apply for asylum,’” said the attorney.

To be granted political asylum, individuals need to prove that “they have suffered persecution or fear that they will suffer persecution due to race, religion, nationality, membership in a particular social group or political opinion,” according to the U.S. Citizenship and Immigration Services (USCIS).

Attorneys representing the nine Dreamers said they were confident that all of them have a valid political asylum case.

The leading attorney in the cases, Margo Cowan, said the fact that they’re all virtually Americans exposes them to risks in Mexico. But she also emphasized that each of the Dreamers has a solid case.

For example, Cowan said, 37-year-old Claudia Amaro, along with her husband and 13-year-old son, was exposed to violence and persecution by criminals in the city of Torreon in the northeastern Mexican state of Coahuila. Amaro’s husband was kidnapped and two weeks after his release he was held at gunpoint by carjackers.

The family was forced to move to another side of town and was too afraid to report the crime to the police, Cowan said.

Many of the Dreamers involved in the action potentially could have qualified for Deferred Action for Childhood Arrivals, or DACA, a deportation reprieve from the Obama administration, had they not left the country, Cowan explained.

“The president has the power to make changes if he wanted to include people that fall outside these guidelines,” Cowan said.

Under DACA, almost 400,000 young people have been able to obtain a deportation reprieve. It’s unclear how many who could have qualified for DACA have already been deported or left the country of their own will.

Truax points out that the impact of the Dream 9 action must be looked at in the context of all of the Dreamer groups and the advances they’ve made since the DREAM Act failed to pass Congress in 2010. The legislation would have allowed millions of undocumented youth to legalize their status in the United States and access a path to citizenship.

Different organizations of Dreamers, Truax said, have been smart to work with each other when their goals converge — and to respect the differences in their strategies when they don’t.

Within the diverse Dreamers’ movement, criticism of the Dream 9 has been virtually nonexistent.

“I’m concerned about their safety in the detention center,” said Dulce Matuz, director of the Arizona Dream Act Coalition (ADAC). She signed an online petition for their release and has encouraged others to do so.

In terms of strategy, she said, “All we can do is respect each other’s avenues.”

Local immigrant rights groups in Arizona, like PUENTE, are throwing their support behind the Dream 9.

“The rhetoric for the past six years on immigration reform has been to blame Republicans. These nine Dreamers are forcing Democrats to act,” said Carlos Garcia, director of PUENTE.

NIYA has been successful, through a variety of protests across the country, in getting more than 30 Democrats to write a letter to the president asking for the release of the Dream 9.

“It’s genius,” said Garcia. “If it doesn’t lead to reform in Congress, it is going to lead to the expansion of DACA, for example for people to travel or people that have left, and set a precedent for people to do the same.”