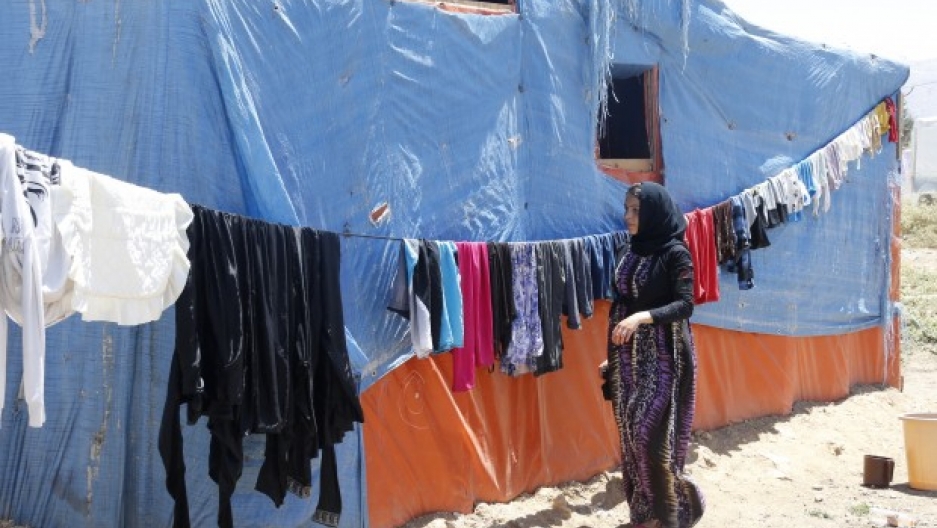 A Syrian refugee walks past clothes hanging on a line in a refugee camp in Lebanon's Bekaa Valley. (Photo by Mohamed Azakir/Reuters.)

The suburban town of Boutchai is a quiet community of handsome condos and villas nestled among the pine trees of Mt. Lebanon, with a view of Beirut and the Mediterranean below.

Like many small towns in Lebanon, it’s the kind of place where residents know each other. But the arrival of hundreds of Syrian refugees has shaken people here, like Sami Jakour, 45, who owns a car repair shop. He says the town has become unsafe.

“You see (Syrians) at all hours of the night outside, at 2 a.m. and even at 5 a.m.,” Jakour said. “If you see three or four guys in the street, looking around suspiciously, it’s obvious they’re up to no good.”

Joseph Mallouf, who owns a bakery nearby, says young Syrian men were gathering on the town’s streets at night, drinking, starting fights and harassing young women. Thefts increased, and he says he heard about rapes in nearby villages.

“There are many strange people, we don’t know who are here,” Mallouf said. “And we have a different culture. Our culture is different from theirs.”

As a response to these complaints, fears and rumors, the municipal council here instituted a curfew requiring that all “foreigners’ in town be off the streets by 8:30 p.m. Everyone here says that really means “Syrians,” and other non-Lebanese laborers.

Jakour is all for it.

“I think it’s fantastic. The fact is we couldn’t even put a towel or a chair outside,” he said.

The curfew is a warning for those who come to do something bad, Mallouf says.

There are more than 1.5 million Syrian refugees in countries surrounding the war-ravaged country. At least 600,000 of them have gone to Lebanon — the number may be as high as one million. And that’s in a country with a population of only 4 million. There are no refugee camps in Lebanon, so the refugees are spread around the country — in cities, towns and villages.

In some places, there are more refugees than natives, and that’s putting a burden on everything from water and electricity, to jobs and education — and security.

Across the country, and among Lebanon’s usually divided religious and political groups, many agree on one thing: Syrian refugees are upsetting the normal order of things. The curfew offers an answer.

Farid Nassar, the treasurer of the nearby municipality of Ramhallah, says his city council instituted a curfew after the number of Syrians mushroomed from three dozen to more than 500 in just a few months.

“First of all, they used to be around 10 people, without their family, then they started bringing their family, their kids, their wife, their mother, their grandparents, cousin, relatives. So the area is getting to be a little bit packed more than usual,” he said.

The curfew lasts from 9 p.m. to 6 a.m., and is enforced by a local police force. Human rights groups here say the curfews are racist — and classist. Lebanon’s Interior Minister even said the curfews have “no legal basis.”

But the practice goes on, mainly because the Lebanese state is too weak to stop it. Or to offer a paranoid public any alternative.

“There’s no discrimination here,” said Sami Jakour. “We have workers from the Philippines, Sri Lanka, and Ethiopia, they’re never an issue. We only have problems with the Syrians here. It’s not discrimination; we were forced to do this. The fact is it’s about safety. These people are going around and we want to be safe.”

There have also been unconfirmed reports of vigilantes beating up Syrians caught violating the curfew. Nassar says that’s not true, at least in his town, though he said it wouldn’t be a big deal if a few Syrians, “fall on their faces” — as he recalled Syria’s vicious treatment of locals during its 30 year occupation of Lebanon.

Police brutality is not unusual in Lebanon. A Human Rights Watch investigation in June found that abuse is “common” in Lebanese police stations, and vulnerable groups are more likely to be mistreated by Lebanese authorities.

Back in the town of Betchay, Naji, a 28-year-old from the Syrian town of Deir Ezzour, works in Jakour’s car repair shop and says he’s OK with the curfew. He asked his last name not be used.

“All of us are happy about the curfew, because the fact is no problems are happening, we hear about problems happening in other villages, but not here,” he said.

Meanwhile, a few doors down at Joseph Mallouf’s bakery, an Egyptian employee is clearly not pleased. He’s been here six years and is now subject to the curfew. He declined to give his name as he made Lebanese flat bread with cheese and Thyme.

“Some of us have faced problems with the curfew, and I’m sure if I had some kind of emergency, or had to go to the pharmacy or hospital, then I would face some trouble. I guess I’d have to go ask the police for permission,” he said, rolling his eyes.

A woman named Mariam picks up bread and says she supports the curfew, but points to the larger issues Lebanon is facing due to the Syrian presence, beyond just security worries.

“There’s a large number, and it’s been putting a massive burden, and causing massive pressure, on the state, and on the towns, on the economy, on the electricity, on water, and now the Lebanese person can’t find work,” she said.

Lebanon’s uneducated working class are facing the hardest time — their jobs are being taken by Syrians who are receiving aid and are thus willing to work for lower wages than their Lebanese counterparts, according to a recent study conducted by the Issam Fares institute at the American University of Beirut.

That study also found that half of Lebanese polled believe no more Syrian refugees should be allowed into Lebanon.

Syrians at all levels of society are now competing with Lebanese for the same jobs. They are opening up shops, restaurants and businesses here. And that’s upsetting many Lebanese, whose economy is already negatively affected by the war next door.

With no end in sight for the Syria conflict, those problems, and others, are only likely to intensify.