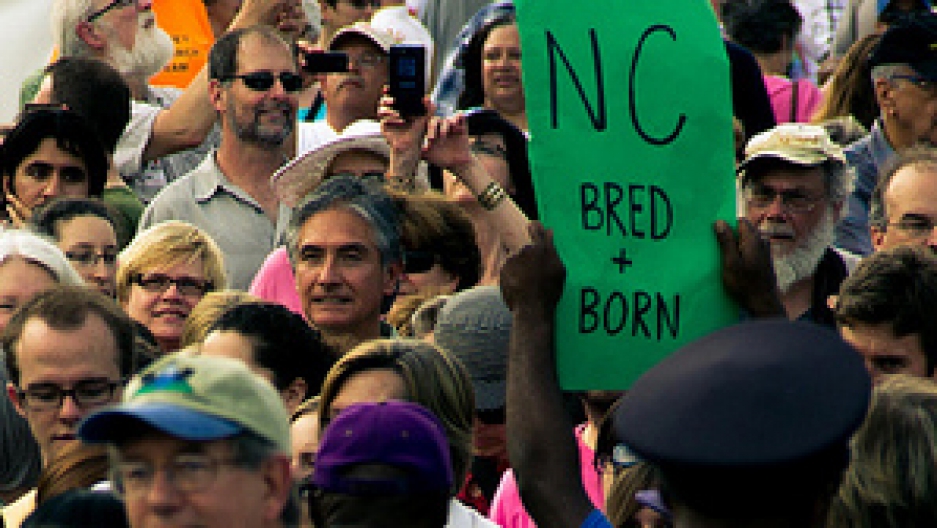 A growing number of North Carolinians are showing up, being vocal and sometimes even getting in the way of the Republican majority in the state legislature, which is swiftly passing laws that make the state more conservative.

The demonstrations, now called "Moral Mondays," began 11 weeks ago and originally included just a few dozen protestors. As the legislature passed bill after bill that angered liberals — policies like cutting benefits for unemployment recipients or reducing funding to schools — the number of protestors ballooned.

On July 1, the state implemented sharp cuts to unemployment benefits, reducing or eliminating benefits for more than 70,000 state residents. In a few months, the cuts will affect another 100,000.

The state is also now spending less on education than it was in 2007, and teacher pay is continuing to decline.

A week after the Supreme Court ended the Voting Rights Act, which required certain, mostly southern, states to have the Department of Justice sign off on voting policies, Republicans changed early and Sunday voting policies. Those are traditionally popular among Democratic voters. The state also introduced a voter ID law.

Protests reached a fever pitch during the tenth Moral Monday last week, when a group of 2,000 showed up to protest a bill that packaged all previously-proposed legislation to limit abortion rights, was passed.

Similar to efforts in Ohio and Texas, North Carolina Republicans pushed for regulations that would restrict access to abortions.

Demonstrations outside the state capital in Raleigh have become similarly noisy and well-attended as those held during Texas representative Wendy Davis' filibuster of anti-abortion legislation.

"It is loud," said Ben Bradford, reporter for WFAE. "There is singing. There is chanting. There are speeches over microphones. There are signs and its a mixed group of people from a lot of different places in the state."

Of the thousands of demonstrators, some 70 were arrested last week, bringing the total number of Moral Monday arrests close to 700. Because the state cut security funding, the onus has fallen on the city of Raleigh to police the protests. So far, the city has spent a reported $69,000 on Moral Monday security and Mayor Nancy McFarlane said she doesn't expect to be paid back.

“It would be nice if the state reimbursed us, but that’s not going to happen,” she said.

North Carolina Governor Pat McCory, who took office in January, said that the protestors are trying to uphold the status quo, something he intends to break.

"We have got to fix a broken operation in state government and in order to do that I'm stepping on the toes of the right, the left, the middle and a lot of bureaucracies," he said.

With the current session winding down, Republicans are hustling to pass their proposals, or else they will have to wait until January.

"For the last hundred years, there hasn't been a Republican-controlled legislature and governorship," Bradford said. "They really feel like this is the time to enact their policies and in politics there's a very short window to get those things done."

A woman is arrested during a June 17 protest at the North Carolina capitol building. (Photo courtesy of Flickr user yashmori).