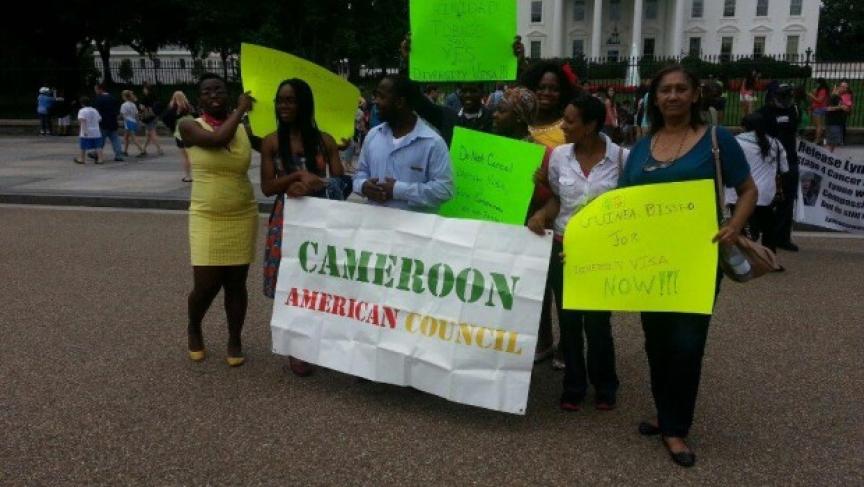 African immigrants rally in front of the White House on April 3 to advocate keeping the Diversity Visa. Roughly 25,000 Africans come to the U.S. each year through the program. (Photo courtesy of Cameroon American Council.)

Each year, 50,000 people are selected at random to immigrate to the United States.

They don’t need specialized job skills or even a relative in the U.S. What they need most is a little luck, and to be from a country with few recent immigrants living in the U.S.

The Diversity Visa, better known as the “Green Card Lottery,” is a little-known program inside the U.S., but is played by millions of people worldwide each year. It was established in 1990 to diversify the immigration population in the U.S., designed, in part, to help more Irish settle in the United States.

Over the past two decades though, the complexion of lottery winners has become noticeably darker. Today, about half of visa winners come from Africa.

The immigration bill making its way through the Senate would put an end it.

That’s sparked some anger among Africans living in the U.S., as well as the Congressional Black Caucus. They say if Africans aren’t fairly represented in the immigration overhaul, they’ll torpedo the bill.

Dominic Tamin’s father won the Green Card Lottery in the 1990s, bringing Tamin to New York from Cameroon on Jan. 18, 1997.

“That’s when I arrived here. I remember because it was so cold outside. I’d never experienced that cold weather before,” he said.

Tamin is now a math teacher and entrepreneur in Newark, N.J. And he’s active in the movement to save the Green Card Lottery.

“It’s something that is dear to my heart. I don’t know how to put this, because I’m so passionate about it,” he said.

So, he decided to express his passion through music. He recently produced a song, “DV Lottery,” sung by the artist MayJa Money.

This argument, though, isn’t convincing most leaders in Congress. Many Democrats have quietly turned their backs on the Diversity Visa, giving it up as a bargaining chip.

Republicans, like Rep. Bob Goodlatte from Virginia, have been more outspoken against it. Goodlatte’s office turned down an interview request, spole against the Diversity Visa on the House floor last year.

Mark Krikorian, the executive director of the Center for Immigration Studies in Washington, agrees with that. He said the Green Card Lottery is ripe for fraud, and that terrorists could steal a winning lottery number and enter the U.S. illegally.

Plus, he said, immigration policy should not be based on national origin.

“And so what the (Congressional) Black Caucus seems to be saying is somehow that (ending the Diversity Visa) is unjust because they want more people who look like them in the immigration flow,” Krikorian said. “And what I’d like to know is how is that different from someone saying, ‘Well, I want more white people immigrating to the United States.’ It’s exactly the same thing.”

But Democratic Congresswoman Yvette Clarke, who represents Brooklyn in the House of Representatives and is a member of the Congressional Black Caucus, challenged people to look at the population of the nation.

Clarke said any new immigration law must include a dedicated flow for African and Afro-Caribbean immigrants. Currently, Africans come to the U.S. in three primary ways: asylum seekers, family visas, and the Diversity Visa program.

“We want to be sure that this nation is not one that doesn’t continue to welcome people of African descent and that it is comparable to what we do for others coming from around the world,” Clarke said.

It’s not comparable right now, argues Sylvie Bello, the founder and CEO of the Cameroon American Council in Washington. Bello said the immigration bill includes programs designed to benefit Asians, Latinos and European immigration, such as 10,500 visas annually set aside for Irish immigrants. But there’s nothing specifically for Africans.

Bello said she hopes President Barack Obama will speak about immigration on his visit to Africa this week. And that he remembers a time not long ago when very few Africans made it to America, Africans like Obama’s own father.

He came here on a student visa.