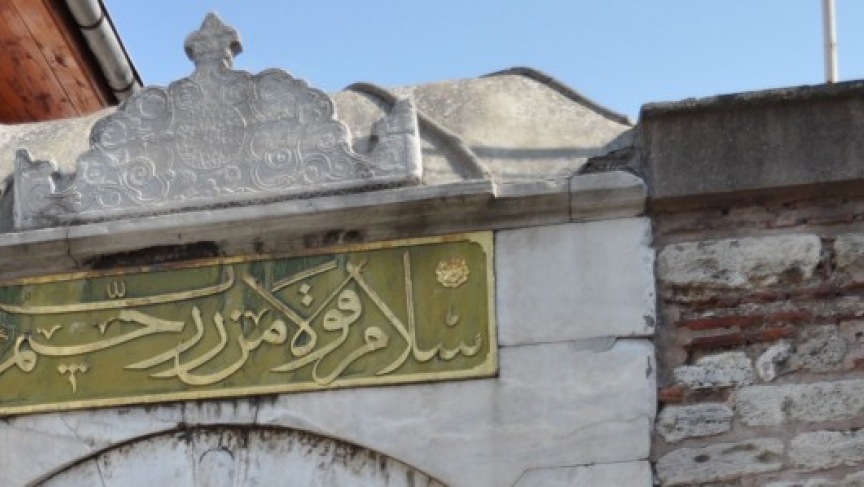 The Ottoman Research Foundation in Istanbul, has a sign outside its door printed in the Ottoman Turkish language. (Photo by Ashley Cleek.)

On a recent Wednesday afternoon, seven students sit in a darkened classroom on the campus of Bosporus University in Istanbul.

They squint up at a projection of a 100-year-old, handwritten letter.

The letter is written in Ottoman Turkish — that is, Turkish in the Arabic alphabet. Slowly, the students read the script aloud from right to left. When they get stuck, Professor Edhem Eldem writes the word on a chalkboard.

It takes the class an hour and a half to read four pages.

Ottoman Turkish looks nothing like today’s Turkish. In the Arabic script, vowels are not marked. That’s confusing enough in Turkish. But Arabic script doesn’t differentiate between consonant sounds like G and K.

“You can write something in Ottoman Turkish that can be read gel, which means come or kel, meaning bald,” Eldem said.

And there are hundreds of examples like this: different words, written exactly the same in the old script.

With the founding of the Turkish Republic in 1923, Mustafa Kemal Ataturk decreed an alphabetic revolution. The Arabic script of Ottoman Turkish was banned. And a new Turkish alphabet was invented based on Latin letters. Turkey’s population was mostly illiterate, and the story goes that Ataturk traveled the countryside with a chalkboard teaching villages to read this new Turkish.

The new alphabet is so phonetically correct that, “If it is written properly there is no where you can go wrong when reading a Turkish word,” Eldem said.

“Arabic is the East and the Latin script is the West,” Eldem said. “It is artificial, but ... people believe in it.”

Eldem says while his rational side supports the Latin script, he also feels the cultural loss.

“I am in a position to see to what extent the loss of that script has dispossessed Turks, especially students of history, with some kind of a contact with the past,” he said.

What Turkey did was radical. It was not just a script change. It was a cultural shift. Only a handful of countries have attempted to remake their alphabet. Most have stuck with the script they have. Iran, for example.

Persian, like Ottoman Turkish, is written in a slightly modified Arabic script, adopted around the 9th century when Persia converted to Islam. And like Turkish, some say it’s not the best fit.

Vowels are not marked. There are two letters for the sound T. Three letters for S and four for Z.

As a university student in Tehran in the 1970s and 80s, Hossein Samei dreamt of revolution. He and his classmates argued for the adoption of the Latin script.

“We wanted to change the world and because we were students of linguistics, we wanted to do it in language,” Samei said, smiling.

Today, Samei is a lecturer in Persian at Emory University in Atlanta. With a soft salt and pepper mustache and a worn orange polo shirt, he doesn’t look much like a revolutionary anymore. Those were youthful ideas, Samei says.

Now he thinks the Persian alphabet is fine just how it is.

The script, says Samei, links Iran east to Afghanistan and south to India. It’s a connection to history, to literature and art. Changing the script would not just mean reprinting books, it would place a barrier between the present and the past.

“We like our culture. We like our literature. We want to change, but we believe more in reform,” Samei said. “Even this recent election shows that.”

Instead, Samei says, he sees authors and bloggers reforming the Persian language. Some writers mark vowels to indicate the sound. Some add an extra letter to make a word more legible. Still it’s a real struggle to read. Especially for those outside Iran.

Every evening at their home in New Zealand, Fariz and Medio Azadi sit with their daughter, Wyana and help her sound out words in Persian. Persian is Wyana’s native tongue, but her dad says she has a hard time reading.

“She’s still struggling, that’s my observation, she is struggling with connecting the words,” Medio Azadi said.

Azadi is a linguist. He’s frustrated with the Persian script. But he also sees it as an expression of national character.

“It’s like the doctors writing a prescription, it looks mysterious,” he said. “If you are able to read the text, you are an insider. If you’re not able to read it, you’re an outsider.”

Azadi wishes Iranians would get behind a few small reforms that would make the script clearer. That way, his daughter would be more likely to master it.

This video illustrates how Persian would look if translated into the Latin alphabet.