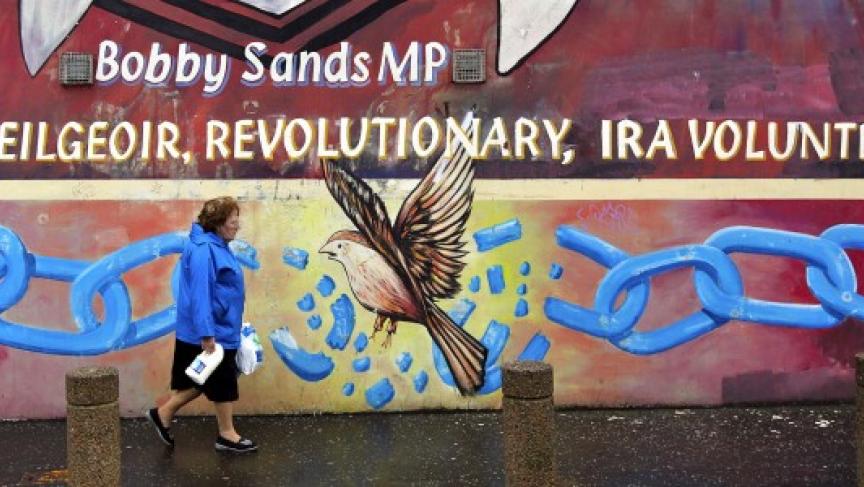 A woman carries a carton of milk past a Republican mural of "Gaeilgeoir" (Irish speaker) Bobby Sands outside the Sinn Fein offices on the Falls road in West Belfast. (Photo by Reuters/Cathal McNaughton.)

The Irish language used to be a symbol of Catholic nationalism. But it’s gradually becoming de-politicized, morphing into just another minority language in need of saving.

Lower Newtownards Road in East Belfast is solid Protestant territory. It was a hot spot for sectarian violence at the height of the troubles.

But inside a community center, about a dozen people from the neighborhood are doing just that.

You wouldn’t have seen this a few decades ago. Just ask Sandra Irvine.

“When I was at school, I was brought up in East Belfast, yes, in a very Protestant area and for me to learn Irish would have been considered very strange,” she said.

But she had always been curious about the language.

“I did actually attempt to learn Irish, but couldn’t find anywhere that I could go to, so it was in my mind for a very long time, but it wasn’t an option,” Irvine said.

This push for Protestant Irish learners is largely the work of one woman: Linda Ervine, the center’s Irish language development officer. It’s her job to convince people who, at best, see the language as irrelevant and, at worst, as an enemy tongue to care about it. She tells them to look a century into history, to when plenty of Protestants here spoke Irish.

“What the language does is, it allows people to explore the idea of Irishness in a non-threatening way,” Ervine said. “We are Irish. I feel I’m Irish.”

This means a lot coming from Ervine. Her brother-in-law, David Ervine, was a well-known member of the Ulster Volunteer Force — a protestant paramilitary group. He did six years in prison before leading Northern Ireland’s Progressive Unionist Party.

“It was almost like we give people permission from the Protestant community,” Ervine said. “Like, if we could do it, it was alright, sort of took the sting out of it or something.”

Her efforts coincide with a push across Northern Ireland, backed by the government, for Irish language learning called Liofa, meaning “fluent.”

The culture minister whose pet project this is, Carál Ní Chuilín, is a Catholic and a former Provisional IRA militant.

But the campaign does have some cross-community support.

Basil McCrea is one the leading Protestant politicians backing Liofa. He says that for Protestants to embrace Irish, it needs to be freed from its divisive past. He says some Irish Catholic politicians still use the language as a political prop, especially during heated debates in parliament.

“You know when they’re annoyed because they respond in a huge amount of Irish,” McCrea said. “It’s like flying a flag. Fair enough. But it’s got nothing to do about language and everything to do about politics.”

There’s a well-known saying in Belfast, attributed to a Catholic Sinn Fein politician: “Every word of Irish spoken is like another bullet being fired in the struggle for Irish freedom.”

It shows just how political the recent history of this language has been.

But not everyone here remembers that history. At an integrated Catholic and Protestant school south of Belfast, Cuthbert Arutura, or “Tura” for short, is speaking Irish with a room full of 10 and 11-year olds. These kids were born after the 1998 peace agreement.

Tura’s here to show them the language doesn’t have to be about politics. He’s a Zimbabwean immigrant, who moved to East Belfast 20 years ago.

“I’m a Protestant. So I don’t buy the stories that politicians use to justify pursuing certain narratives,” Tura said. “The language isn’t owned by a political entity. It’s something that is living.”

For Tura, Irish has been a way to connect with his new home. Before moving here, he didn’t know how little it was spoken. Now, he works to save it.

“Tír gan teanga tír gan anam,” Tura said. “A country with no language is a country without a soul.”

These words form the lyrics of a song he sings to the students.

Tura is among a wave of immigrants coming to Northern Ireland who don’t view Irish with decades of discord in mind. They see it as just another minority language, one that might be on its way out.

Whether they’re learning Irish, and few are, they are at least helping normalize attitudes to language. Maybe that will mean even a few more locals, on either side of the Protestant-Catholic divide, will consider picking it up.