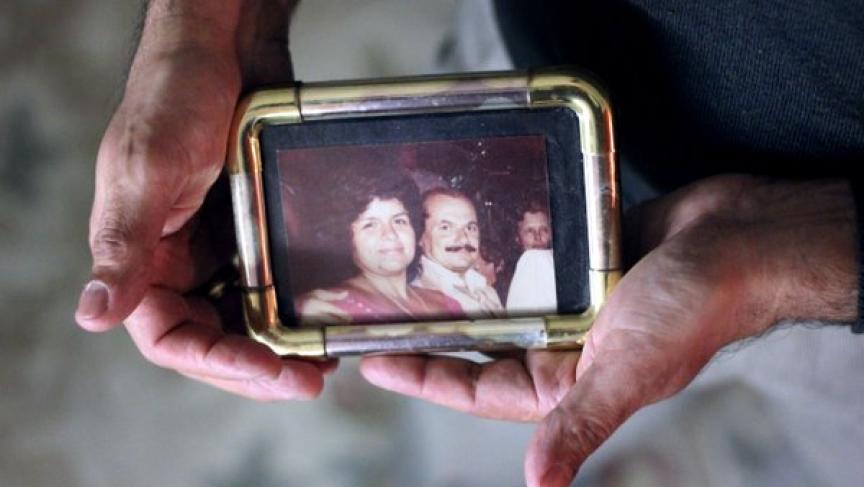 Gustavo Valencia, from Mexico, holds a photo of his father, who migrated to San Diego years ago. Valencia has waited nearly 20 years for his green card to live in California legally, too. (Photo by John Rosman.)

Editor's note: This story is from the public radio collaboration, Fronteras.

President Barack Obama during Tuesday night's State of the Union address will no doubt speak about immigration reform.

So far, both President Obama and Republican lawmakers have agreed on certain starting points. One is for undocumented immigrants seeking U.S. citizenship to get in the “back of the line,” behind everyone else waiting legally. But there is not just one line — rather many. And for some people, wait times can be indefinite.

Gustavo Valencia is waiting in the line that U.S. lawmakers are talking about.

In his teens, Valencia left Mexico for the United States to join his father, who had migrated north himself years earlier. Soon after his father became a US citizen in 1994, Valencia, who had arrived in the United States on a tourist visa and overstayed, applied for a family-based visa to live here legally, too.

Valencia remains in line for his green card, waiting out a process that can appear interminable. In fact, in the past nine years, slow-moving bureaucracy and a high number of visa applicants, has created a backlog that has tacked on some 13 months to Valencia’s wait in line.

“All they give you is a notification and there’s nothing you can do,” Valencia said. “But you’d like to know a little bit more. How come things are not moving properly?”

The Senate’s bi-partisan proposal would send undocumented immigrants to the back of the line. In large part, President Obama also agrees with this concept. But he would also like to increase the total number of family visas, like the one Valencia’s applying for, that are issued every year. That way, immigrants who begin lining up behind Valencia would face a shorter wait.

Sen. Marco Rubio, the Florida Republican who gave the response to the State of the Union last year, also finds the current backlog unacceptable. But he told the New York Times in January that he doesn't have a solution right now.

To understand why not, it helps to understand just how complicated the paths are to legally enter the U.S. Think of them like the lines you see at an airport abroad, full of people waiting to fly into the United States.

There are different airlines, or ways to get a green card. By far, the most popular way in is the family-based visa. There are two paths to that gate. One, the fastest, is for the spouse, young child or parent of a U.S. citizen. But the second line is far longer — it’s like the security line.

“The second line, the second-rate line, is when you’re not an immediate relative, but you’re a family member,” said Lilia Velasquez, an immigration attorney in San Diego.

This slower line is made up of spouses and younger children of current green card holders, along with siblings and older children of U.S. citizens.

These family preference lines are divided once more depending on your home country. For places with high visa demand, such as Mexico, China and the Philippines, imagine the airport during Christmas or a peak holiday travel time abroad.

The line snakes out the door.

Velasquez says, in a case like Valencia’s, when a U.S. citizen parent — particularly from a country like Mexico — wishes to bring over a son or daughter who is over the age of 21, the wait time can easily stretch into decades.

The bottleneck happens because of a yearly cap on family visas. Each country is allowed seven percent of a fixed number, one that hasn’t changed since 1965. But demand has. So, Mexico’s line is a lot longer than France’s.

You can see your place in line through the US Department of State’s Visa Bulletin. But don't take the estimated wait time at face value, Velasquez warns. She points to what are called priority dates in the Visa Bulletin. The priority date is like a timestamp on your ticket, marking when your application went in. The Visa Bulletin then provides a reference date for when someone might become eligible for a visa.

Yet with the current backlog, the Visa Bulletin’s dates can be highly unreliable. Lines from Mexico, with a high volume of applicants, move so slowly that applicants’ wait times are often prolonged.

This is called visa retrogression. Valencia compares the feeling of “retrogression” to watching swings in the stock market.

“When things were going well, you were watching the stock every day,” Valencia said. “When it crashed, all of the sudden you don’t want to see your 401k.”

Still, Valencia remains optimistic. He is employed and has earned a U.S. college degree. But not having a green card has shelved his other dreams, like getting married.

He has met women, but many in his dating pool are undocumented. Entering a relationship with someone without papers at this point would be complicated. If Valencia integrated a spouse into his current visa application, it would place him in a different bracket — and could render meaningless the years he has already waited for a green card, he says.

Yet Valencia still feels that the wait for legal residence is worth it. It's more than obtaining a green card. It's about earning a political voice, he says.

“Having most of your life now here, you would like to be incorporated into the process of being part of society, being able to go out and vote,” he said.

What happens in Congress this year may determine how much longer Valencia, and the millions who may line up behind him, will have to wait.