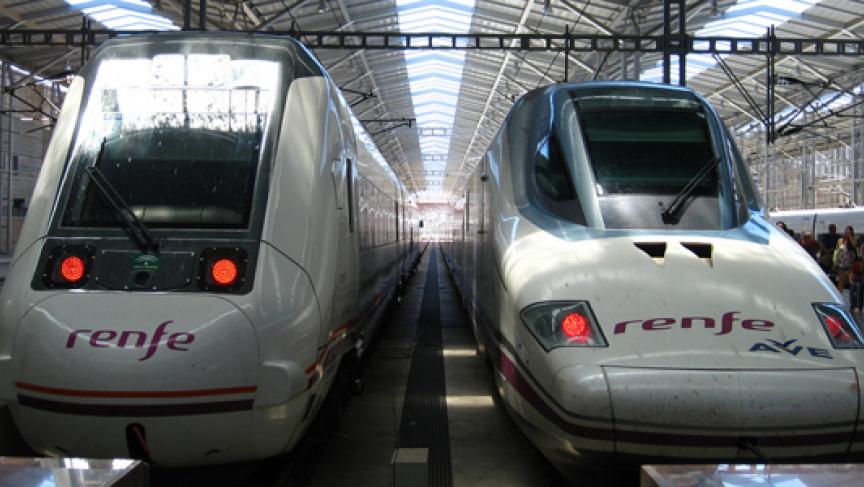 These high-speed Renfe trains are the first high-speed trains connecting Spain with the rest of Europe. (Photo by Flickr user Loco2.)

It’s an historic moment for train travel in Spain.

The country has opened its first high-speed connection to the rest of Europe. It’s the Barcelona to Paris line and its story, in fact the story of all trains in Spain, is one of fits and starts. For more than a century, crossing the border with France by rail fluctuated between hassle and nightmare.

But the new train changes that.

Everything about this train was different from the old. It’s sleek, quiet. Average cruising speed, about 250 miles an hour. And not a ripple on the surface of your drink. Classy, said Spanish retiree Javier Varo, who’d been waiting his whole life for this.

“Until now, I never even considered taking the normal train to France,” Varo said. “Not once. I used to drive. The regular train is really slow.”

By the old train, it takes about three hours to cover the 100 miles from Madrid to the border. To Paris it’s 12 hours or more. But on this high-velocity train? Six hours, 41 minutes.

This is a huge milestone for Spain. Historically, it has lagged behind most of Western Europe when it came to public transportation.

Under the authoritarian regime of General Francisco Franco, the nation rolled out track slowly, announcing in newsreels progress that would have been old news elsewhere.

Spanish trains were more a symbol of isolation than advancement, especially when it came to reaching the rest of Europe.

Blame it on the track gauge.

From the get-go, Spain purposely made its tracks wider than the rest of Europe’s. That meant Spanish trains couldn’t cross into France. And more importantly, French trains couldn’t roll into Spain. As in, invade.

For travelers it meant losing a lot of time.

Silvie, a half Spanish, half French woman riding the new, high-speed train, recalled spending her summers  in Spain as a kid in the 1950’s.

“It was like returning to the 18th century,” she said. “The trains and their coal engines. It smelled. Those trips were interminable.”

After Franco died in 1975, Spain seemed to make up for lost time. Today it’s a world leader in high-speed trains. In building them, and using them. For several years trains like this one to Paris have been careening around the country. But not to Barcelona – or by extension, the rest of Europe.

The Catalans of Barcelona believe the delay has been political. So says passenger Miguel Ribes, a Barcelona native, who rode on the train's first day with his wife, Pilar.

“Catalonia is Spain’s front door to Europe,” he said. “But Spain has always treated us like its backside.”

Ribes wondered why the Spanish government built a high speed route all the way to Galicia, Spain's far northwest corner, and then to the south, to connect to Portugal, all the while ignoring the connection to the rest of Europe.

Catalan leaders, who are currently pushing for independence from Spain, have long included the fast-train controversy in their arguments. But now, the train is rolling. Paris lies ahead. Most riders just seem glad. Even giddy.

Sylvie says she still pined for the old days. She herself is a throw-back: she’s a hobo. Sort of. She did have a ticket from Barcelona – for the first leg of the trip. But she’s hoping to hide on board until Paris.

“If we see the conductor I hope he can cut me a deal,” she said, nervously smoking a cigarette outside during a brief stop. “I don’t have the money. I’m sort of on the margins of society.”

Silvie said she felt more comfortable on the cheap old trains, especially on the Spanish side. Despite their problems, she said, they were more fun.

“One train was right out of a Western,” she said. “Wooden sides, wooden seats.”

You’d pack a basket of food for the trip, she said, and people would open the baskets on the train, and share together.

“Maybe I had ham, but you had some fruit,” she recalled.

Today, everyone has a smartphone. And no one even looks up.