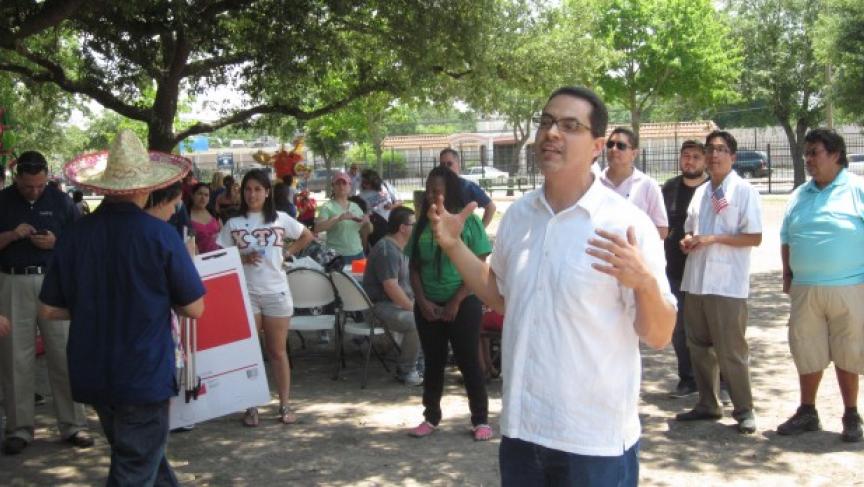 President Barack Obama at his inauguration Monday will surely present a laundry list of issues he’d like to tackle during his second term.

He won’t be able to get them all done. And that leaves special interest groups busy strategizing how to convince the president to put their issue atop his list.

Immigrant rights advocates want their issue addressed soon — establishing a path to citizenship for the estimated 11 million undocumented immigrants currently living and working in the United States. But standing in their way are many conservative lawmakers who regard this as a free pass, or amnesty, for rule breakers.

Down in Texas, Carlos Duarte with the group Mi Familia Vota, or My Family Votes, led a meeting of grassroots immigrant rights activists in Houston. Duarte said they need to target four Republican Congressmen in Houston and two Republican U.S. senators from Texas.

The people in the room nodded their heads. They see their time as now.

“The Latino voice has come out, we’ve made an impact, and people have to respond, right?” said Paloma Martinez with the Service Employees International Union. “And I think people will get fired up if we make that really clear, that it’s possible, it’s within reach. We have a vision and we can do it.”

Latinos flexed their muscle last November. Some 12 million voted, and they voted overwhelmingly, upwards of 75 percent, for Obama. Immigration reform was a top issue for many of those Latino voters, and they rejected Republican presidential candidate Mitt Romney’s focus on border enforcement and “so-called” self-deportation.

Duarte said Latinos must make politicians who sided with Romney know they’ll lose their elections too if their position on immigration doesn’t change.

“We need to call members of Congress, we need to participate in rallies, we need to register to vote, and we need to vote," he said. "Because unless they understand that we are going to make them accountable through the vote, they are not going to be passing immigration reform.”

But that’s a strategy that’s been used for years now, with little to show in terms of significant progress on immigration reform. This time, though, with the Latino vote proving strong, activists hope there’ll be a payoff.

César Espinosa moved to Texas from Mexico City when he was 4. He’s been living in the United States undocumented for the past 23 years and runs an organization called Immigrant Families and Students In The Struggle. Like many immigrant rights organizers, Espinosa himself can’t vote.

But he can rally others to vote for his interests.

“We have people power. We can move thousands and thousands of people to rallies to marches and things like that. When you can’t vote, you vote with your feet, you march,” Espinosa said.

Immigrant rights advocates are planning to make their presence felt in Washington in the coming months. Espinosa said they also want politicians to feel their presence in the pocketbook.

“Obviously they have people that donate to them. And we just target everybody, we cast a wide open net,” Espinosa said. “We approach them, and we tell them this is what immigration reform is, this is who we are, we share our stories with them so that they know that we’re not ghosts, that we are actual people who are contributing, who have roots here, who have business interests here.”

But will all this, and the recent momentum, be enough to get immigration reform done? It depends on your timeline, said political scientist Mark Jones at Rice University in Houston.

“In the short-term, there is no real consequence for alienating Hispanics, at least outside of a few marginal swing districts. In the long-term, though, the Republican Party’s failure to retain and win a large share of the Hispanic vote will spell doom for the party as a viable national force.”

That could be about 8 to 10 years from now, by Jones’ estimate. But are Republican party leaders willing to think that far ahead? Jones said it’s hard to make the case that the Party is in crisis mode, especially in red-state Texas.

“They look to see that they’re winning statewide elections by more than 10 points. They have close to two-thirds of the seats in the (Texas) Senate and State House," he said. "They really aren’t worried about the short-term.”

And on the national level, Jones said, the demographics work out in a similar way.

“You’d be hard pressed to find more than a half-dozen Republican members of the US House who could possibly lose their seat due to Hispanics voting against them,” he said.

On the flip side, consider the Republican politician who aligns with Democrats on immigration reform. They risk being challenged by a more conservative primary opponent come mid-term elections.

But some Republicans are taking that risk. For instance, Senator Marco Rubio of Florida recently came forward with proposals that aren’t all that different from President Obama’s plans. Perhaps Rubio is thinking long-term because he has national aspirations. By many accounts, Rubio is interested in a run at the White House.

She said look at major social movement in history: No lawmaker just wakes up one day and says something like, you know what, today I’m going to give women the right to vote. Change will be through the groundswell, through constant pressure.

The question is: Will immigrant rights activists be able to create enough of it?