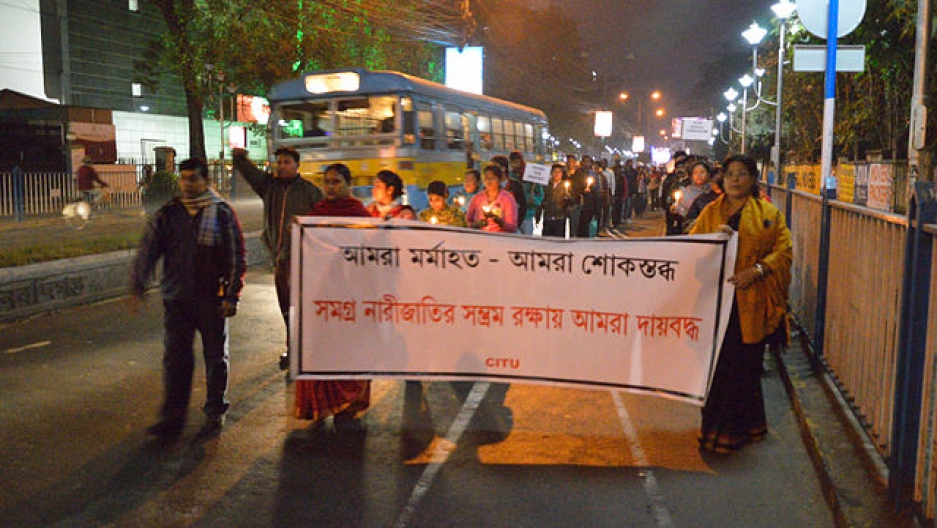 A candlelight rally in Kolkata was held to protest the Delhi gang rape in December 2012. (Photo by Biswarup Ganguly via Wikimedia Commons.)

The Delhi rape case made headlines around the world, leading to protests and calls for change. A more recent gang rape in Punjab, India, fed that fire and has launched a global discussion about rape and gender in general.

Some critics, though, are turning to the role of men, fathers, in India. They say they need to be teaching their sons differently — teaching them to respect women.

But Akhil Sharma, professor of creative writing at Rutgers University and author of "An Obedient Father," says he doesn't expect behavior toward women to change in India despite the media focus on New Delhi and the recent Punjab gang rape case.

"This has been going on forever," he said. "I assume more than one rape like this occurs every single day in India.”

In India, fathers play the role of a disciplinary figure that lacks empathy, Sharma said.

When Sharma was growing up, he says he didn't understand who his father was and thought he'd been assigned to his family by the government.

"I actually thought (my father) didn't really serve much of a purpose and he was scary. When I talk to friends that's how they describe their relationship with their fathers as well,” he said.

With the rapes occurring in India there could be a connection with the role of fathers, Sharma acknowledged. But, he blames these events on people being able to get away with rape without facing repercussions.

“If you feel that you can cause somebody misery and not be punished for it, then people will do it,” he said.

In India, there’s a lack of clarity of how to be sexual, Sharma said. But it’s important to separate out vicious crimes, like gang rape, from sexual ambiguity.

“I don't think anybody would say that it's OK to rape, so when people are doing something like this, they're doing it largely because they feel that they can get away with it. It's like stealing,” he said.

These attackers think they can get away with rape, he said, because they’ve read in papers about people who have gotten away with it. And a woman who’s been raped is unlikely to seek help from anyone, because of the stigma in that community.

For change to occur, it’s not a matter of teaching life lessons, Sharma says, but more about cultivating empathy. All of us have selfishness inside us, but in India men are treated a little bit better than women and selfishness is cultivated a bit more, he said.

And that could be a role for fathers.