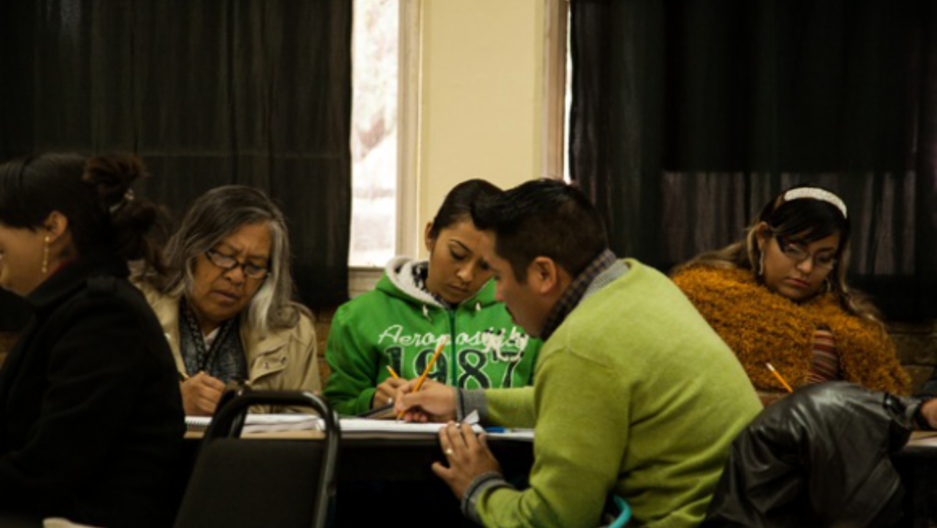 These teachers are learning, or brushing up on, their English, to help students returning to Mexico from the United States. Many can't speak Spanish. (Photo by Myles Estey.)

It’s Saturday morning in the rural Mexican state of Zacatecas and we are in English class.

“In! Between! Over! On!” he shouts out during one exercise.

English levels vary, so Acosta is reviewing some of the basics.

In the class is Nora Santana. She can speak English fine, but feels rusty, too. She’s here to feel more comfortable with the language in order to better connect with her new students, those who grew up in the United States and who are having trouble keeping up with classes in Spanish.

“They feel so confused,” Santana said. “They don’t understand everything I teach in Spanish.”

In recent years, Acosta, an education official here, has witnessed the influx of school-aged kids returning to Mexico. They arrive with their parents, who have left the United States because they are undocumented or couldn’t find work. Acosta says the kids can feel disoriented in a Mexican classroom — like foreigners, but in what is supposedly their own nation.

Now, Acosta is pioneering a project to get Mexican teachers more accustomed to English. While some believe that the money might be better spent other ways, Acosta says that English classes are critical to help teachers and their students adjust.

“If the teachers learn English, the basic English level, they are going to use this kind of tool to communicate with the children that are coming from the United States,” Acosta said.

The class is best suited for teachers like 28-year-old Ari Rodríguez.

Rodríguez says she can have a tough time communicating with some of her new students from the US and keeps English crib notes handy. She mentions one newcomer, Juan, though he goes by John in the US.

He is a soft-spoken 13-year-old, who just moved here from Texas. But when you hear Juan and Rodríguez speak, it’s clear that Juan’s Spanish is improving fast.

Juan is getting good grades here, too, except in Spanish and History. He still cannot articulate his answers to his teachers.

“It's kind of hard to explain,” Juan said. “Like, when I don’t know how to say the words, I just try to explain it to them.”

But for most of these students, speaking isn’t the hardest part — it’s classroom comprehension.

Meet Ashley. She’s 11, born and raised in Southern California. She just moved to Zacatecas with her parents, who were undocumented in the United States. Ashley speaks Spanish perfectly, but has always done her reading and writing in English. She is struggling to read in Spanish and finds the overall transition “weird.”

Ashley’s younger brother, Yoel, is also having a hard time at it. But he’s relieved to be here with his older sister, and a cousin is here, too. Being together, speaking English in the schoolyard, it makes their new life in Mexico easier. And they keep in touch via Facebook, in English, with their friends back in the United States.

Luis Roberto Castañeda directs Zacatecas’ Migration Institute. He says of the 13,000 or so kids who have lived in the U.S. and are now in the Zacatecas school system, nearly all have some difficulty at school. And there are no national programs in Mexico to attend to these students’ needs. Castañeda says when U.S.-born students cannot fully understand what's being said, they do mental translations back to English.

It slows them down.

Like Castañeda, Acosta believes his pilot project is more than learning English: It represents an effort to help U.S.-born children feel more welcome in Mexico and tune their teachers to the fact that their students straddle two worlds.

“They have two cultures, American and Mexican culture,” Acosta sayd. “Where am I from?” they ask.