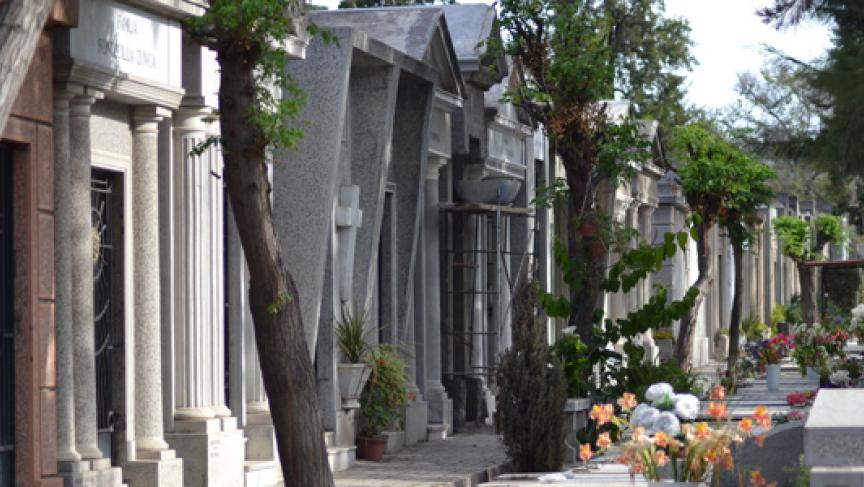 A leafy row of tombs stands in one of the more well-to-do sections of Santiago de Chile's General Cemetery. (Photo by Olivia Crellin.)

What if all the players on the San Francisco Giants decided to stay together in the after-life, pitching in to build a team crypt?

Or, what if Lady Gaga arranged to build her own resting place in the shape of a pyramid guarded by two sphinxes?

Well, there’s a cemetery in Chile where such memorials really do exist. It's located on the outskirts of Santiago, and looks out on the tall peaks of the Andes.

Sounds a little creepy, doesn’t it? But the cemetery is a popular destination for families and tourists alike, with people often stopping by to examine the country's history.

When you arrive at Chile’s General Cemetery on the weekend, the day for funerals, it feels like you’re outside a buzzing city mall. Cars park around the block.

This is, in fact, one of Chile’s oldest and most sacred spots. Families come from all over the city to spend their weekends together — with both the living and the dead.

Alejandra and her daughter Gabriela have been coming to take care of her mother’s grave every week since she died two years ago.

“I come every week, every week since November 2010,” she said. “In another part (of the cemetery) is my father, we’ll go and visit him too. Together, all together, my siblings, my mother ... It’s beautiful here. It’s peaceful.”

The huge, 200-year-old cemetery is home to some two million graves, including for famous Chileans like poet Víctor Jara, singer Violeta Parra and most of Chile’s presidents.

Augusto Pinochet — who took power in a 1973 coup — isn't here, but there are monuments to the many desaparecidos, or ‘disappeared’ from the time of his dictatorship.

A tour gives locals and tourists a history of Chile through the stories of the people, famous and ordinary, buried here.

From the mother who killed herself out of desperation for her lost children, and still searches for them among the graves, to the exhumation of socialist president Salvador Allende, who took his own life during the 1973 coup. The tour brings the tombs to life.

Student Camilo Oritz said the tour taught him many new things about the history of his country.

“It was amazing, things that I had never heard before. I learned a lot," Oritz said.

The tour guide dresses as a scary monk and in the dark the tour can actually be a bit spooky. Just ask British tourist Laura Kelland.

“I’m very scared there are actors hiding and that they are going to jump out at me. So I’m a bit distracted,” she said.

Tombs range from crowded, tenement-style living to more lavish structures. In the Avenue of the Architects, Egyptian-style tombs sit alongside Greco-Roman and Gothic mansions. There are also group mausoleums housing entire soccer teams, or members of the Union of Milkmen.

“It’s a world within a world,” said Edgar who has worked here all his life

But he says there are options for everyone.

While the residents are stuck in the past the cemetery itself has modernized in recent years. Funerals are scheduled via a "departures" board and tomb architects even advertise their work by carving a discreet telephone number somewhere on a grave.

The desire of Chileans to be close to their loved ones will not die, making the cemetery not just a tourist attraction but also a vital part of everyday life.