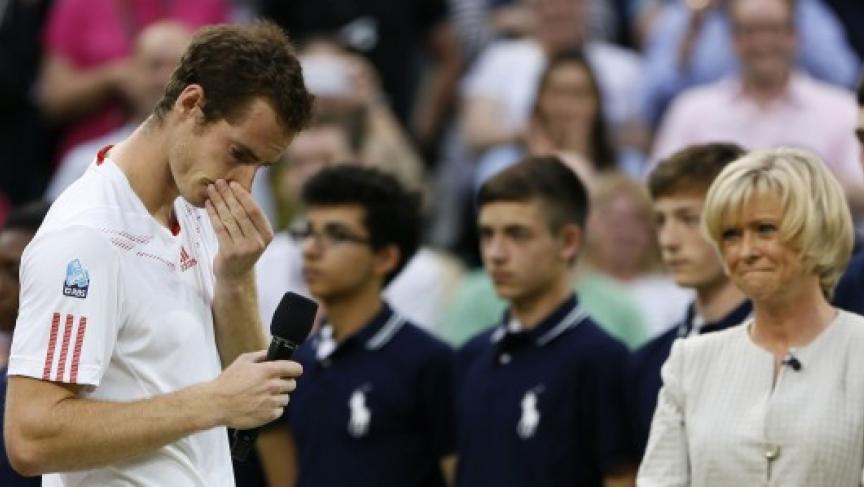 “I’m going to try this and it’s not going to be easy,” Murray said through tears, addressing the Centre Court crowd after losing the men’s final to Roger Federer.

Murray blubbered his way through a speech — and in doing so, endeared himself to a nation.

He’d been a moderately popular tennis player. But from that moment on, the British public no longer merely admired Murray. They loved him.

Had he’d burst into tears in an earlier era, he might have been mocked and shunned. But not in every earlier era, turns out.

There was a time, long before those stern Victorians, when Britain was a nation that wept a lot.

Historians says that 17th and 18th century visitors from mainland Europe recorded this behavior in diaries.

“A proper man and a refined woman would display their emotions openly,” said journalist Ian Hislop who has made a BBC TV series on the subject. “They would cry and you weren’t a civilized person if you didn’t.”

It was ingrained in the culture. Books were written about it, and codes of behavior taught.

So what changed? What transformed the British character into the more familiar one — of restraint and unflappability?

Hislop believes it was the French Revolution in 1789.

The British watched “some foreigners getting very excitable, out of control, passions unleashed,” Hislop said. “Look what happened.”

What happened was the rise of Napoleon, followed by decades of war.

Napoleon was a man who wore perfume, read books and looked at art.

The British response was the Duke of Wellington, a man of discipline who spurned creature comforts. Wellington then vanquished Napoleon on the battlefield.

In the years that followed, the British empire thrived. Self-restraint became the emotional expression of that, and it served the empire well.

The British people came to see their rule abroad not as repressive but as a civilizing mission.

Charles Darwin, better known for other observations, declared that “Englishmen rarely cry” — implying that everyone else did a little too much.

Thomas Dixon, director of the Centre for the History of the Emotions at Queen Mary, University of London, says many British men at the time put themselves through feats of endurance: swimming the channel, climbing mountains, trying to find the source of the Nile.

The expeditions were “an extreme version of the stiff upper lip, proving that the Anglo-Saxon male could achieve anything, could suffer anything and come out the other end robust and manly,” Dixon said.

As for women, they were praised for putting up with a hard life, in silence.

It was a “backhanded compliment ... to say to women, ‘You’re so great at suffering and having no power. Please carry on doing it,’” Dixon said..

But that didn’t last forever — women demanded and got the vote. What’s more, millions of men died in World War I because they followed the orders of incompetent officers. The idea of grinning and bearing things lost its appeal.

However, after a few years of social rebellion — and lots of partying — along came a second Napoleon: Hitler. Britain’s wartime propaganda machine revived the idea of the stiff upper lip.

“Never in history has an entire people formed so frightful an ordeal so bravely. So, yes! England can take it,” the newsreels said.

Joanna Bourke, a historian at the University of London’s Birkbeck College, cites another propaganda film, Fires Were Started.

A woman in military uniform is on the telephone.

“All of a sudden a bomb drops just behind her and she dives under the table. Just a second later, you see her crawling out, and she carries on doing her business,” Bourke said.

The World War II version of the stiff upper lip was admired around the world, especially in the United States.

It survives today, at least in how the world views Britons. They are seen as people who just get on with life. They kept calm and carried on through the IRA bombings in the 1970s and the London terrorist attacks in 2005.

Moreover, the British don’t grumble — even if they do make a point of saying “mustn’t grumble.”

Still, modern life has dealt blow after blow to the stiff upper lip. Most people put it down to a combination of TV, therapy and America.

“The most powerful arguments against the stiff upper lip were really medical ones,” Dixon said. “Both physically and mentally having a stiff upper lip, being repressed, was bad for you.”

Brits were learning to let it all hang out, with the help of one figure in particular: Diana, Princess of Wales.

It’s well documented that when Diana died, millions of Britons cast aside what was often described as their "natural" reserve, and wept openly.

They wept for someone who seemed to personify the new Britain — open, emotional, confessional. She seemed at war with the old order — stuffy, formal and cold.

The very public mourning of a nation was enough to make many Britons wonder just exactly what the national character was, or had become. That questioning continues to this day, with episodes like Murray’s Wimbledon tears.

He acknowledges that its beginnings in the 19th century were less than benign though.

“The flaws with the stiff upper lip do include it being used as a method of social control: ‘Don’t control, carry on,’” he said.

But that “empire swagger” is gone for good. By the time it returned during World War II, the stiff upper lip had a smile. Today, it sometimes sports a tear, too.

Will it keep evolving? Hislop thinks so. He says it’ll adapt to the time and place, re-emerging when needed. “Serious times require a certain amount of keeping it together,” he said.

If Hislop is wrong, and the stiff upper lip is dead, that’s fine, though.

“No point in making a fuss about it, just deal with it and get on with life," he said.