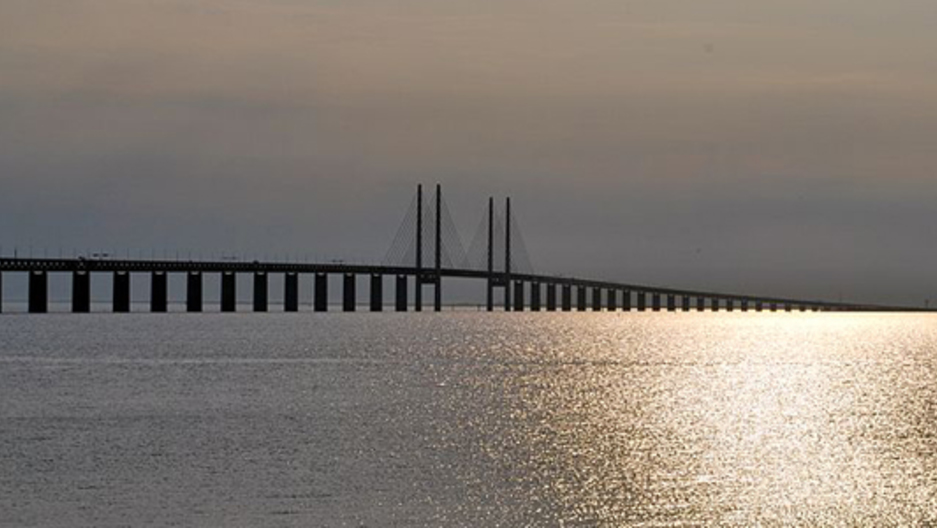 The Øresund Bridge connects Denmark with Sweden, where many Danes have moved after they married foreigners, making them ineligible to live with their spouse in Denmark. (Photo by Nikos Roussos via Wikimedia Commons.)

In Denmark, restrictive family immigration laws often prevent young Danes from marrying and living in the country with non-European spouses.

One of the consequences of this law is that it has forced many second-generation immigrants to leave Denmark, and start from scratch as immigrants in a new country.

Take Sara, who was born to Palestinian parents in Denmark. She went to school here, attended college in Copenhagen and has worked for years as a school teacher in the heart of her hometown.

But for the past several years, Sara wakes up every day at dawn, kisses her husband and children goodbye, and begins her three hour commute from Malmo, Sweden, across the Oresund bridge to her school in Copenhagen.

“I was very sad about Denmark,” she said, “because how could they treat me like this?”

Denmark’s restrictive family reunification laws make it incredibly difficult for Danes to marry and live in Denmark with a non-European spouse. Prevented from living together in Copenhagen, Sara and her Jordanian husband moved to Sweden, where they had an easy time getting visas.

“I am well-educated, I have never done anything against the law, I have always been straight. So, why do they treat people like us that way?" she asked. "I was very angry, even colleagues at my work were like ‘how could they kick you out?’ That’s really, really sad."

In fact, Sara’s situation is not at all unique. Since the immigration law passed in 2002, the bridge connecting Copenhagen to Malmo has come to be known as the “love bridge.” More than 9,000 Danes are estimated to be living in Malmo for exactly this reason.

Imam Pedersen, a member of the Muslim Council of Denmark, said he’s appalled by what he sees as his country’s attempt to keep out immigrants who are the spouses of Danish citizens.

“They were born in Denmark,” he said. “They’re raised in Denmark, but they’re classified as foreigners and they’re treated as such," he said. "This I see as a major problem. We have a lot of people out there who feel they’re not being allowed to belong to any country.”

Pedersen said the issue is xenophobia, pure and simple. And he called the fear especially misguided, since a relatively small part of Denmark’s population, just 10 percent, is made up of immigrants.

“I think a lot of people are appalled by what has happened in Denmark because it is so much contrary to what we can call the Danish spirit for many decades. Then again there’s been a cleverly orchestrated, we can call it propaganda, that’s making people scared of the immigrants, of the foreigners, of the ‘aliens’ that have come into our country,” he said.

Alex Ahrendtsen is a member of Parliament from The Danish People’s Party, one of the most popular right-wing parties in Europe. Ahrendtsen said he has nothing against immigrants, per se. What he doesn’t appreciate is foreigners who move to Denmark but refuse to give up their old customs. That's especially true when it comes to marriage, which is why the family reunification law is so important.

“It forces young people in Denmark to marry someone in their home countries,” he said, "to protect against the whole issue of forced marriages," he said "We don’t want that. So if we stick to our strict legislation on family reunification we also help young female, especially Muslim, immigrants in Denmark to make it possible for them to chose their own husbands instead of their fathers and mothers."

But European Union lawmaker Cecilia Malmstrom said that would be a disaster for Denmark, and would mark an end to a unified Europe. She maintained the individual members of the EU need to tamp down the kinds of rhetoric coming from right-wing parties all across Europe.

“There is a climate today in many member states of nationalism, closing borders, xenophobia,” she said. “I can say it, the Commission can say it, the Parliament can repeat it, but it’s the local leaders the national leaders that have to stand up for the basic principles on which Europe is founded.”

But Denmark doesn’t look any closer to enacting open immigration policies in line with EU standards.

For Sara’s family, their state of dislocation may be permanent.

“Now we have settled and for us just to move back again it feels difficult,” Sara said. “When you have kids its like you’re bound, you feel its difficult to go back again, it's like you have to begin again from zero.”