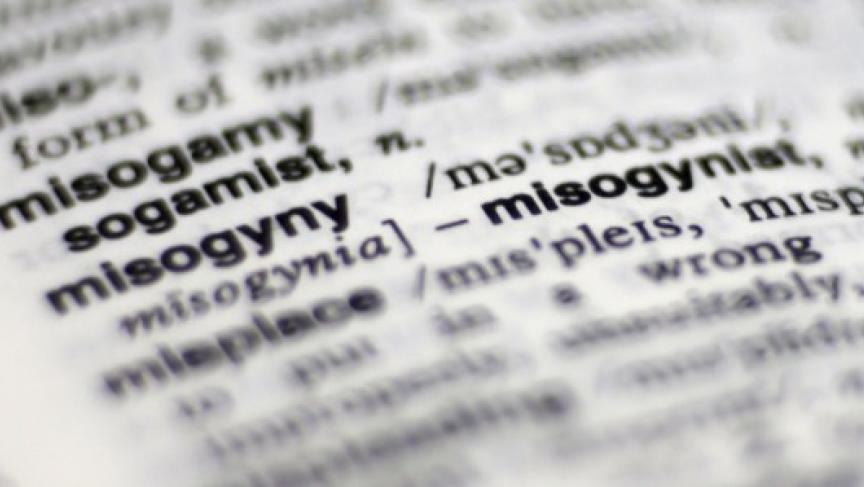 A photo illustration shows the entry describing the word "misogyny", in a 2nd edition copy of The Macquarie Concise Dictionary, on a coffee table in Sydney (REUTERS/Tim Wimborne)

Share
In politics, words can take on new meanings in the blink of an eye. The phrase "binders full of women" had zero currency before the second Obama-Romney debate. Now it's what many people remember as the debate's takeaway moment, full of perceived meaning about women, power and the workplace. In Australia, another word has become caught up in a political storm over the role of women in society and politics. It was uttered–several times–by Australian Prime Minister Julia Gillard. "I will not be lectured about sexism and misogyny," Gillard told the Australian parliament. That was the start of a speech that has rapidly become famous around the globe, thanks to YouTube. Gillard was defending her government, which had been accused of protecting the speaker of the house, who'd been caught using sexist language in text messages. Rather than talk about that case, Gillard turned the tables on her government's accusers, specifically Conservative opposition leader Tony Abbott. "The Leader of the Opposition says that people who hold sexist views and are misogynists are not appropriate for high office," said Gillard. "I hope the Leader of the Opposition…is writing out his resignation." "If he wants to know what misogyny looks like in modern Australia," she contined, "he needs a mirror." Gillard's opponents didn't take kindly to this speech. More than a few objected to her use of the word misogyny. They said that was going too far, much farther than the word "sexism." Sexism, they pointed out, means discrimination based on a person's sex. But misogyny means intense dislike and mistrust of women. That's what the dictionaries say. For the time being at least. Sue Butler, who is editor of the best-known dictionary of Australian English, the Macquarie Dictionary, said it's time to update the definition of misogyny. After watching Gillard's speech, Butler and her fellow editors wondered about their dictionary's definition of misogyny. Like most other dictionaries, the Macquarie Dictionary used a definition "that had been standard for some centuries": the hatred of women. But Butler and her team of editors didn't think that Gillard was using the word quite like that. She wasn't accusing Abbott of a "pathological hatred of women." The accusation was more of a "common garden prejudice against women, particularly women in positions of power." Butler's team tracked the evolving meaning of misogyny back to 1970s feminist discourse in the United States, where it was often used as a synonym for sexism; a synonym "with a bit more bite to it perhaps," said Butler. "But still in the same range of meaning of entrenched prejudice." And so the editors of the Macquarie Dictionary have announced that they will be updating their definition of misogyny to reflect the way it has evolved in recent decades. That's only enraged Prime Minister Gillard's political opponents for a second time. They say the dictionary's editors are letting Gillard off the hook, rather than forcing her take responsibility for her hyperbole. To which Macquarie editor Sue Butler shrugged, and pointed out that many words change their meanings over time. But what of the statements made by Australia's Conservative leader Tony Abbott–the very statements that Gillard was calling "misogyny"? Abbott once wondered whether it was a bad thing that men have more power than women, and suggested that men might be more "adapted to exercise authority." And then there were his personal attacks on Julia Gillard. Gillard told MPs she was offended when Abbott stood next signs that said "Ditch the Witch" and one that called her "a man's bitch." It almost makes the Obama-Romney debate, repeatedly described in the US news media as "feisty," seem friendly.