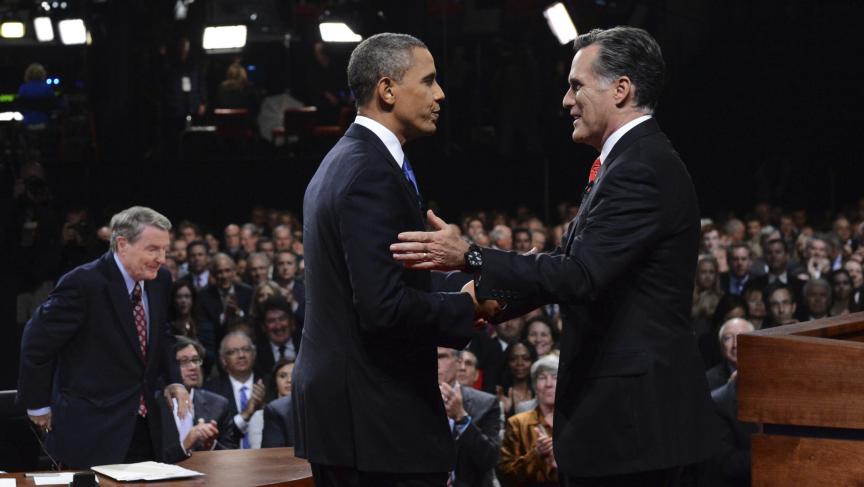 Republican presidential nominee Mitt Romney shakes hands with President Barack Obama as mediator Jim Lahrer gets up at the end of the first 2012 U.S. presidential debate in Denver on Oct. 3, 2012. (Photo by Michael Reynolds/Reuters.)

Mitt Romney and Barack Obama sparred before a national TV audience Wednesday night and, at least according to the pundits and even a flash poll of national voters, Romney came out on top.

Described alternatively as aggressive, likable and personable, Romney came across as a viable alternative to Obama, commentators said. At the same time, Obama, seeming slow and perhaps tired, did little to take advantage of openings Romney might have given him.

Romney blasted Obama for his policies, saying they had "crushed the middle class" and being distracted by his effort to pass comprehensive healthcare reform.

“The president would prefer raising taxes,” Romney said. “I understand. The problem with raising taxes is it slows down the rate of growth.”

For his part, Obama did score a few points. For example, he was praised by critics for asking Romney why he was afraid to share the specifics of his proposals.

"Is the reason that Governor Romney is keeping all these plans to replace secret because they're too good?" Obama said. "Is it because middle class families are going to benefit too much from them?"

But by and large, the night went to Romney. Writing for the Associated Press, Charles Babington said the debate gave new hope to Republicans who had been beaten back by a drumbeat of bad poll news for Romney.

"Romney managed to highlight his top campaign themes — calling for lower tax rates, less regulation, the repeal of "Obamacare" — while largely fending off Obama's demands for details on how to pay for his proposals or safeguard Americans' health and well-being," Babington wrote.

Obama and Romney will now try to capitalize on, or correct, the positions staked out in the debate. Obama has campaign rallies in Denver and Madison, while Romney was heading to Virginia. All three are states that could swing either way in November.

The next debate will be between Vice President Joe Biden and Rep. Paul Ryan, the GOP vice presidential nominee, on Oct. 11.