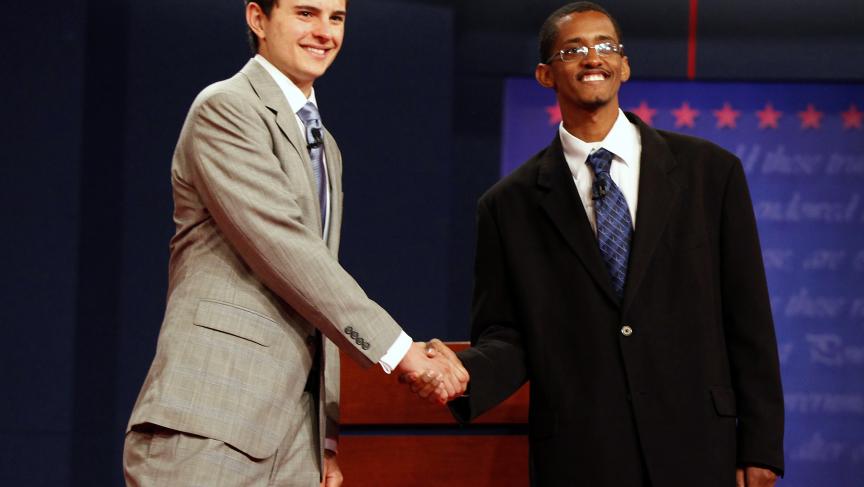 President Barack Obama and Mitt Romney meet on the stage at Denver University Wednesday night for the first of three televised debates they'll have with each other.

For Obama, it's a chance to open up a wide lead with just more than a month to go until election day. For Romney, it could be a chance to score points and close — or at least narrow — a persistent deficit he's faced.

But is that even possible? According to an analysis from the Washington Post's Ezra Klein, no presidential election was ever decided by the debates.

Of course, Richard Nixon's poor debate performance against John F. Kennedy certainly contributed to his defeat. And Sarah Palin didn't do herself any favors in 2008 either. Overall, Klein wrote, debates can make elections closer, but rarely tip them one way or another. Of course in a race as close as 2012, anything is possible.

This first debate, moderated by Jim Lehrer, will feature a simple format: six segments of 15 minutes each. No rigid time limits, with the debate designed to encourage robust exchanges between both Romney and Obama. The debate is slated to focus on domestic issues, which should give plenty of room for debate on job creation and the economy in general.

While the two men have certainly spent a great deal of time talking about each other, they actually haven't really crossed paths in years. According to The New York Times, the last time the two shared a stage was actually eight years ago. at a Gridiron Dinner in winter 2004.

"The challenge for both men in the debate, to be moderated by Jim Lehrer, will be to enliven the conversation with fresh details, rather than offering a line-by-line replay of the campaign so far," the Times wrote.

While the men debate, Americans are already voting. In dozens of states, early voting has started and more will open up in the days before as well.

The debate begins at 9 p.m. Eastern, 8 p.m. Central and will be carried on most major broadcast and cable news networks.