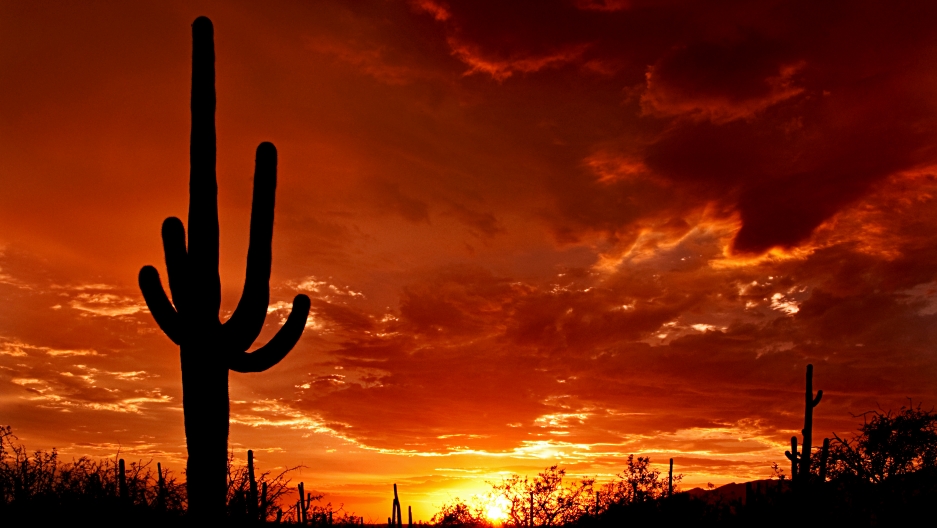 The past few years have seen Arizona repeatedly in the national spotlight.

The state's controversial SB 1070 law made Arizona the focal point of a national debate about immigration. The 2011 shooting in Tucson of Congresswoman Gabby Giffords — an act of violence that killed 13 people and left six others injured — again brought national attention to the state.

A controversy over the Tucson school district’s decision to remove books used for Mexican American Studies fueled a national debate about education reform and how issues of culture and ethnic identity should be taught in public schools.

Jeff Biggers, author of “State Out of the Union: Arizona and the Final Showdown Over the American Dream,” says that identity issues have always been inherent to Arizona.

With the presidential campaign in full swing, issues like immigration, gun control, and education are being discussed on a national stage, and Arizona is inevitably a key part of that conversation.

"You can't understand the headlines today — the Arizonification of American we keep talking about — without understanding the history of Arizona," he said.

From the time of the Civil War, long before Arizona officially became a state, there was debate over whether the territory would support the Confederacy or the Union. In 1912, Arizona entered the Union with the most progressive of state constitutions, yet became a center of conservatism in the '50s and '60s with the rise of Barry Goldwater.

In fact, Biggers said, one of its first governors warned Arizonans and indeed all Americans that the 99 percent needed to take on the one percent — rhetoric that would be familiar to Americans today.

"This was the foundations of the real Arizona that came into the nation," Biggers said.

Today, Arizona is at the forefront of a 21st century states' rights movement.

To Biggers, SB 1070 is not indicative of the direction the country is going in, but rather a holdover from a mindset we are moving away from.

Biggers said the book is titled "The Final Showdown of the American Dream" because he believes this is the last gasp of a generation of Americans who deny the contributions of immigrants to this country.

"(They) are completely dishonest in terms of the facts and representation of the immigration rates and the role of immigrants in our economy," he said. "But more important, (they) are sanctioning a level of racial profiling we've never seen before — that we'll never see again."