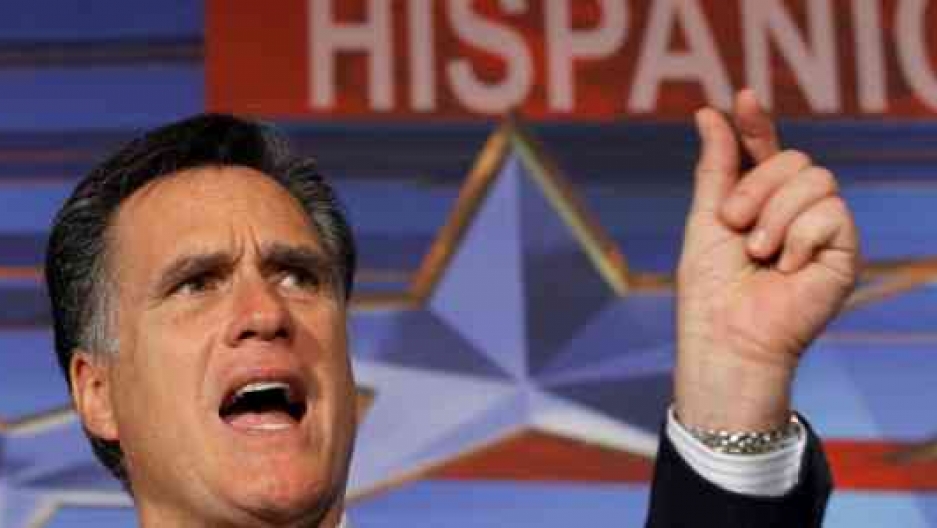 This summer Mitt Romney appeared on a Cuban-American radio program in Florida. Romney was on his way to a fruit juice stand, so, the host asked him: What are your favorite types of fruit?

“I am a big fan of mango, papaya, and guava,” said Romney.

The hosts couldn’t suppress their laughter.

The chuckles were because Romney said he likes papaya. That might not strike you as all that that funny. But papaya is Cuban slang for vagina.

Now to be fair, who, besides a Cuban or Cuban American, would know that? But that’s not the only Spanish slip-up from Romney. His most notorious one came five years ago when he was giving an impassioned anti-Castro speech in Miami.

“At the end of speech, Romney had the crowd fired up,” said Joe Garcia, a Cuban American in Miami who unsuccessfully ran for U.S. Congress from Miami as a Democrat. “And he (Romney) ended, ‘Patria o Muerte, Venceremos — the nation or death we shall win,’ which is the closing line of all of Fidel Castro’s speeches, right? It’s a great line. Unfortunately for Romney it was the wrong line in this crowd.”

But Romney is far from alone having problems with Spanish.

She meant to say “Sí, se puede.” Not a huge deal, but it is among the most famous American political phrases in Spanish, popularized by Cesar Chavez in the 1960’s.

Then there’s the downright bad Spanish from Newt Gingrich.

But at the end of the day, does it really matter if an English-speaking politician has a bad accent or messes up a few words?

In Denver, American voters Maria Young, originally from Mexico, and Martha Caban from Puerto Rico both said they recognize the candidates' for even trying to learn their language.

"Because at least they’re honoring and respecting us and trying to do something to connect with us,” Caban said.

But what if they really, really screw it up like Romney did in Miami, speaking to Cuban American voters and quoting Fidel Castro?

“It will not matter. I am used to bad translations, so it doesn’t matter,” Young said.

And that’s coming from an Obama supporter.

But Christine Marquez-Hudson of the Mi Casa Resource Center in Denver thinks differently.

“I think it can come across as patronizing," she said.

She said if a politician with a limited mastery of Spanish has an inauthentic message, she doesn’t want to hear them try and speak the language to Latinos.

“When someone comes out who has absolutely no personal connection and says, ‘Hola, bienvenido,’ and they say it in a really terrible accent, I think it can be offensive," she explained.

But Marquez-Hudson doesn’t see this from either Barack Obama or Romney. She says Romney’s connection to Latin America gives his attempts at Spanish some authenticity. And she appreciates when President Obama uses his favorite Spanish phrase, “Sí, se puede.”

Presidential candidates and their surrogates have been speaking some Spanish as far back as the 1960’s.

Since then, many presidential candidates have tried some Spanish here and there, most notably President George W. Bush, who often spoke the language.

President Bush was applauded by many for speaking Spanish. Though, many also made fun of his Texas accent.

So, at the end of the day, what’s a candidate do? Try a little Spanish? Not try? Why bother if it can result in endless ridicule?

Diane McGreal, who works with the language company Berlitz and directs the company’s global leadership training program, suggests candidates be up-front with their audience.

"I would start out by saying, I want to apologize for any mistakes that I make and then say a few words. And then the next step would be to ask their permission to continue in English, to say it’s important that that the message I get across is clear and understood," she said.

And there is one other way to make absolutely certain you get your Spanish correct: pre-record the message.