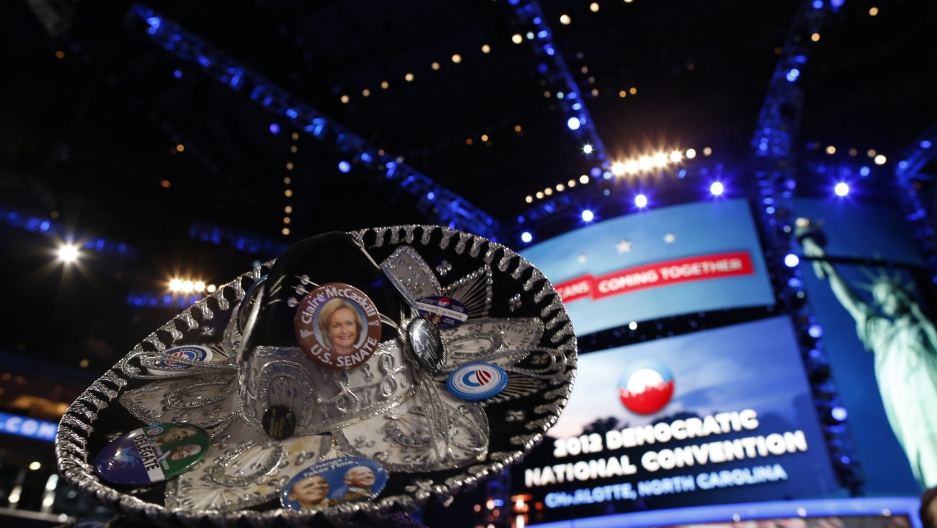 A delegate wears a Mexican-style sombrero before the start of the first session of the 2012 Democratic National Convention in Charlotte, North Carolina, September 4, 2012. (Photo by Jim Young/Reuters.)

When viewers tune in, political correspondent Todd Zwillich said they'll be treated to a visual feast of blue, and red-white-and-blue.

But the Democrats won't be allowed to bask in their own glory. Already, the media is swirling around Democrats' struggle to answer the question of "Are voters better off today than they ere four years ago?" Zwillich said.

"Some said 'Yes, but...' some said 'No.' Martin O'Malley, the governor of Maryland and probably candidate for 2016, said no before he said yes," Zwillich said. "They're going to have to have a clear answer (that) is yes, and an explanation."

Democrats are expected to acknowledge just how tough things are right now, but make the case that things are slowly getting better and the middle class is best served with Obama looking out for them, rather than Romney, Zwillich said.

Also, it might not be visible tonight, but the convention is being held in a fairly small arena, especially compared to where the Republicans gathered. It will likely look just as big through the lens of the network cameras, though, Zwillich said..

"When they shoot the first lady or the president himself, it'll look just like Ann Romney or Mitt Romney," he said.

That's also meant just a very few state delegations are able to sit on the floor itself — and those that got the prime seats are all from swing seats of course.