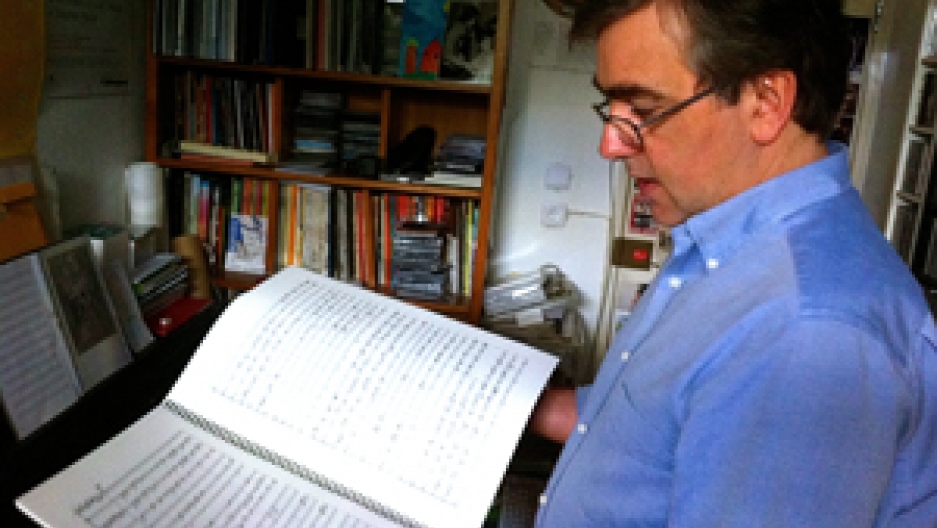 Share
As Europe's economic crisis drags on, public and private funding for arts and culture is drying up. In Portugal, artists remain in survival mode and are testing new ways to stick with their passions. Recently in Lisbon, Luís Tinoco, a well-known classical music composer, talked about surviving the economic crisis and one of the financial lifelines he sought out. Tinoco was in his studio, filled with large composition books of minute, penciled-in notations: symphonies inspired by poets like Walt Whitman and Portugal's Fernando Pessoa. A recent piece, he said, "took me, I would say, about four or five months to write, because I like to think things over and over and rewrite. It's really hard work." But as Tinoco prepared his first CD, Portugal's economy crashed — hard. Key arts supporters, including the culture ministry, dissolved. Major foundations and commissioners retreated. "It was always a mission impossible. All the doors closing," he said. "I tried private companies, I tried state funding. I was really in a big stress, waking up in the middle of the night." Refusing to quit, Tinoco, like other artists here, improvised. In his case, he tested Portugal's first ever internet crowdfunding company to raise the final 3,000 euros needed to finish his orchestral work. "It worked," he said. In 30 days, Tinoco reached and surpassed his fundraising goal. But he was nervous, too. While Kickstarter made crowdfunding mainstream in the US, it's still new to Portugal. That's because artists here are used to institutional funding. Panhandling directly from the public is unheard of. "I was a bit fearful because when you ask the public to be involved in the process like this, if that fails you are also failing in front of the public," he said. Tinoco did get some pushback. Fellow composers feared that Kickstarter-style funding would let the government off the hook. Perhaps. But Tinoco and others argue that they need money now, and that the government doesn't have it in this weak economy. "What happens as well is that government, and namely in this current day and age, they don't unlimited funds and they don't have the ability to fund every single piece of work that is out there," said Paulo Pereira, co-founder of PPL, Portugal's first crowdfunding company It's a tiny start-up, in an office at a Lisbon business university. But it met its first-year goal of raising 73,000 euros for projects, including Tinoco's CD. Pereira says investments have come in from Australia, Asia, the US, Portugal, and elsewhere. He admits this may sound run of the mill to Americans, but the Portuguese are still pretty wary of giving online . "People had some skepticism for example regarding online payments. And so these things take a little longer to catch on," said Pereira. "You need to build a lot of credibility on a platform like ours before people really start understanding that they can trust us, that the projects are good." Tinoco also talks about his risks: if his CD fails, the public will unlikely fund him again. And meantime, overall economic uncertainty lingers. "Of course, we all try to think positive. And there is an expectation that this a kind of a journey of two, three, four years that we need to go through and something might start refreshing and recovering," Tinoco said. "The worst thing is that we don't know how more serious it's going to get." Grim talk from an artist determined to survive, seek out alternatives and resist heading for the exits.