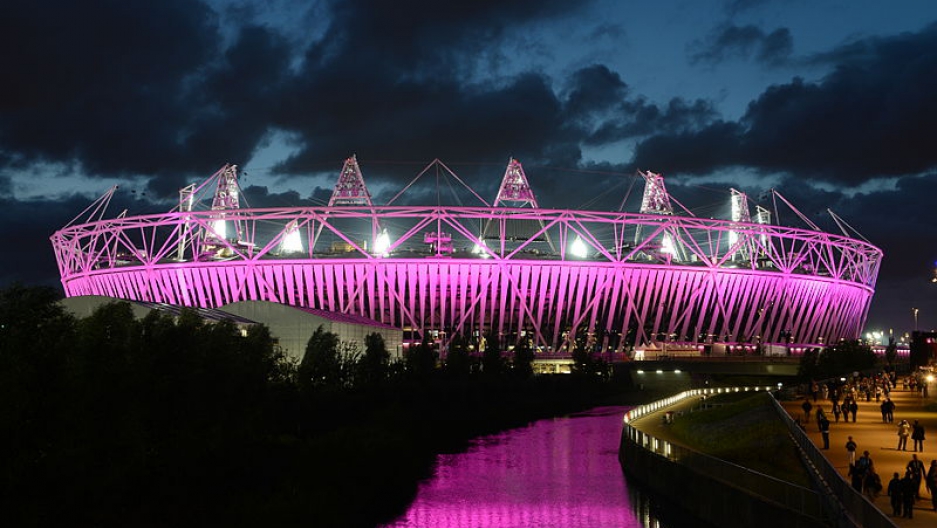 London's Olympic Stadium will shrink after the games in an effort to make it more usable. (Photo by Gerard McGovern via Wikimedia Commons.)

It's celebrated the country's National Health Service and the world's fastest men and women.

But after the two weeks of Olympics, the stadium will move into the second, less auspicious phase of its life — just like countless Olympic Stadiums before it.

Despite the millions of dollars and countless hours invested in its construction, officials say after the Olympics conclude, they want to reduce the size of the stadium by taking off its upper tier.

Tom Ecker, author of "Olympic Facts and Fables: The Best Stories From The First 100 Years Of The Olympics,"  said the plan is to take the stadium from 80,000 seats to about 60,000.

"It's too large for soccer, track and field and concerts, which will be there in the future," he said.

Montreal's Olympic Stadium is an example of just how badly an Olympic stadium can be received in its later life. The stadium, which wasn't even completed when the Olympics began, has no anchor tenant and is widely considered to be a white elephant.

"It took more than 20 years for the taxpayers to bail the stadium out," Ecker said.

Athens, which hosted the 2004 Olympics, uses its main stadium for soccer matches. Ecker said the stadium is in great shape, but the Olympic grounds are an absolute mess, filled with weeds, graffiti and even stray dogs.

Beijing's stadium, as well, has struggled to attract tenants and used in the four years since it hosted the 2008 games.

Atlanta, on the other hand, took its stadium and converted it into a baseball-only home for the Atlanta Braves baseball team. Barcelona used a 60-some-year-old stadium for its Olympic stadium — and continues to use it to this day, Ecker said.

"It's a great tourist stop," he said.

Ecker lauded London for its approach to building an Olympic stadium — for taking an economically depressed stadium and converting it into the Olympic grounds.

"They took a wasteland, a depressed area, and they have developed it into one of the most beautiful areas I have seen. They're going to turn the Olympic Village into apartments, which a lot of cities have done after the Olympic Games, but the best thing is they're going to have 11,000 affordable homes built," Ecker said.