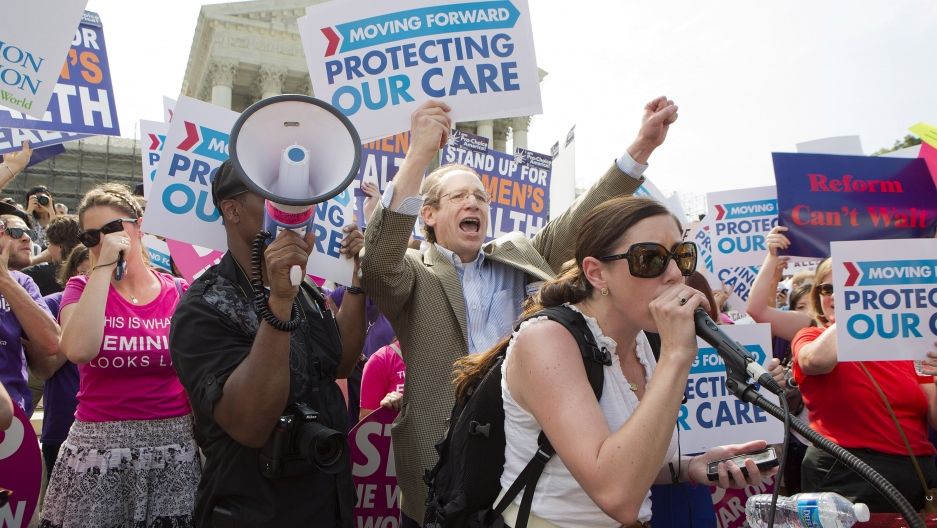 The U.S. Supreme Court ruled Thursday to uphold the majority of President Obama's health care law, keeping intact the individual insurance mandate that was among the law's most contentious — and crucial — provisions.

Court observers called the split 5-4 decision one of the court’s most historic rulings in recent history. It was a significant election-year victory for both Obama and Congressional Democrats. Many of them helped pass the law, known as the Affordable Care Act, in 2010.

The individual mandate, which requires virtually all Americans to buy health care insurance or pay a fine, was upheld as a constitutionally allowed tax. Chief Justice John Roberts wrote in the majority opinion that because it was within Congress's power to tax, the Supreme Court couldn't forbid the law or comment on its wisdom or fairness.

Roberts, a conservative, sided with the court's four liberal justices to form the majority. Justice Anthony Kennedy, frequently the court's swing voter, joined the dissent. On behalf of the minority, Kennedy wrote that the law was "invalid in its entirety."

Many Republicans vehemently agree. As Obama's signature domestic initiative, the health care law has faced relentless attacks from conservatives since its inception. They've vowed to continue their fight, despite the Supreme Court ruling.

"What the court did not do on its last day in session, I will do on my first day if elected president of the United States," he said in remarks delivered shortly after the court announced its ruling. "And that is I will act to repeal Obamacare."

Obama was dismissive of any threats of repeal. He said it was time to focus on the law's implementation now that the Supreme Court had ruled in favor of it.

"What we won't do — what the country can't afford to do — is refight the political battles of two years ago, or go back to the way things were," he said Thursday afternoon.

But the Supreme Court's ruling wasn’t a complete victory for Obama. While upholding most of the law’s central pillars, the court did restrict its expansion of Medicaid. The majority chose to limit a provision that forced states to comply with a new eligibility requirement or risk losing their Medicaid funding. It ruled that the provision was constitutional as long the federal government only pulled new funds — not all — from non-complying states.

The majority also fell short of upholding the individual mandate under the Constitution’s Commerce Clause. A ruling on those grounds would have affirmed Congress' power to require everyone to buy health insurance as part of its authority over interstate commerce.

"That Clause authorizes Congress to regulate interstate commerce, not to order individuals to engage in it," Roberts wrote in the majority opinion.

"Unlike the market for almost any other product or service, the market for medical care is one in which all individuals inevitably participate," Justice Ruth Bader Ginsburg wrote. "Virtually every person residing in the United States, sooner or later, will visit a doctor or other health care professional."

An affirmation of the law under the Commerce Clause would have refuted one of the most popular Republican arguments. Conservatives contend that if the government could make people buy health insurance, it could make them to buy almost anything — a huge overreach of federal power.

Legal experts said the ruling against the Affordable Care Act's constitutionality under the Commerce Clause could also influence future challenges to other interstate commerce laws.

"Reading between the lines of the opinions today, it's clear Congress still has broad power to regulate interstate commerce," said Abbe Gluck, a professor at Columbia Law School, in an email. "But there are five votes to draw the line at that authority when Congress tries to make people buy things they are not already buying."