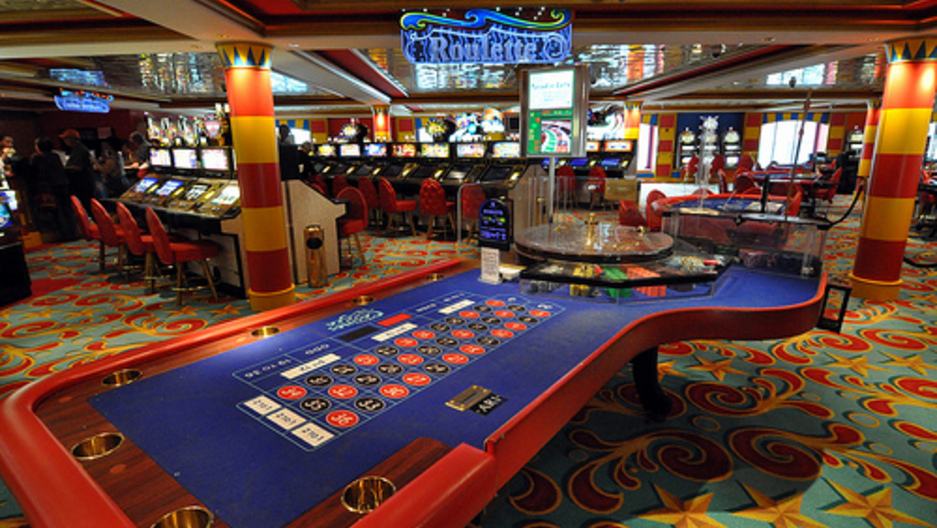 This casino is aboard a Norwegian Cruise Line ship. (Photo from Flickr user Kevin Harber.)

The Professional and Amateur Sports Protection Act of 1992, or "The Bradley Act," outlaws gambling on sporting events in the United States, with a few exceptions granted for certain states. Christie already signed legislation allowing bets to be taken at casinos and horse tracks earlier this year. But technically it's still prohibited by federal law.

Joe Nocera, an op-ed columnist with the New York Times, believes that legalizing sports gambling would be financially beneficial for states.

"It certainly would be if it does go through. Nevada already does have sports betting and taxes sports betting quite successfully, and as Dan (Wetzel) points out in one of his columns about this, this is a $350 billion industry that is almost all cash. That is done under the table and the government gets nothing. It's a little like prohibition. It's not like you're going to stop it. All you would wind up doing was move it above board," Nocera said.

Dan Wetzel, a columnist for Yahoo! Sports, said that while the IRS would not be taxing office pools or Final Four tournament brackets, it would not be difficult for the government to generate revenue from sports gambling.

"The ability to set up sports books in just existing casinos, race tracks, things like that, would tap into this huge (underground economy.) The big money is in the NFL each week, and I think by legalizing it, you're going to get a piece of that action," Wetzel said. "They've been gambling on sports since they started doing sports in this country. It's already out there, so to be able to setup and take a piece of that would be pretty easy."

While leagues may worry about the effect gambling would have on the intergrity of their games, Nocera suggested that legalizing sports gambling would actually reduce outside influences on the outcome of sporting events.

"Whatever pressure there is to fix a game, t exists already, and it exists, probably, even in a larger extent because it's illegal. It's criminal, so you have these criminals lurking around, sometimes trying to fix games. It does happen. It doesn't happen very often. But basically, the main promoters of this idea is the NFL and the NCAA and all the other sports organizations. The evidence strongly suggests that you would probably reduce that pressure if you turned this into a legal activity as opposed to an illegal activity," Nocera said.

Despite allowing teams to accept advertisements from casinos and other gambling agencies, the NFL has remained steadfast in its stance against sports gambling. Mike Florio, Editor of ProFootballTalk.com, wrote that he doubts New Jersey's effort to get the federal law invalidated will succeed. In 2009, Delaware, which is in the same federal judicial district as New Jersey, tried to legalize single-game betting in its state.

The sports leagues, led by the NFL, sued Delaware in federal court and won in a verdict that ultimately upheld by the same court that would be asked to pass judgment on New Jersey's efforts to get the federal law overturned.

But all signs are that Christie is going to go ahead with legalized gambling in his state and see how the federal government reacts.