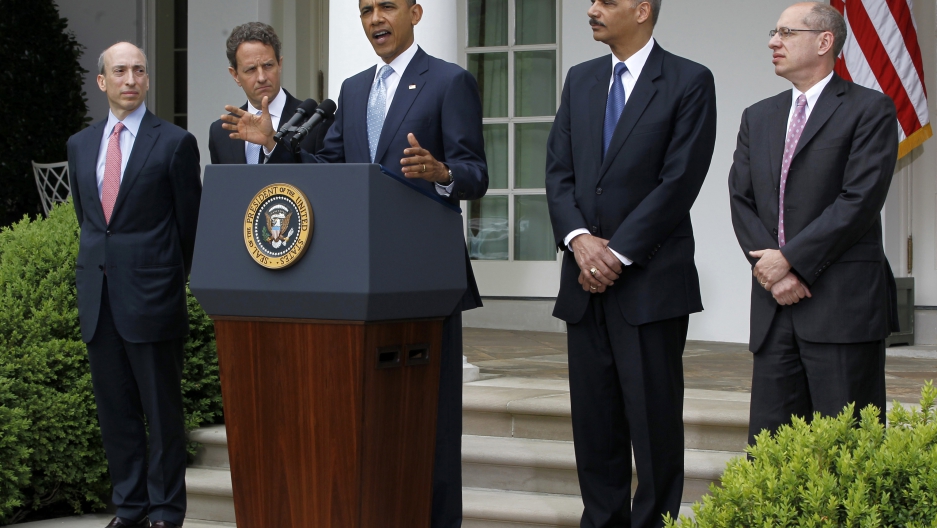 President Barack Obama makes a statement announcing a plan to crack down on manipulation in oil markets, in the Rose Garden of the White House April 17, 2012. With Obama are, from left, Commodity Futures Trading Commission Chairman Gary Gensler, Treasury

President Barack Obama on Tuesday announced a broad crackdown on price manipulation and speculation in the oil markets.

He called for more government oversight of oil markets, including increased funding and staffing for the Commodities Future Trading Commission and an increase in civil and criminal penalties against manipulators. The initiative comes as oil prices spike and pose an increasing challenge to Obama's re-election bid.

Obama also called on Congress to take action to crack down on manipulation.

"I think it's smart to couple the oil companies and the financial companies as adversaries of the president and perhaps friends of (former) Gov. (Mitt) Romney," the presumptive Republican presidential candidate, Kloza said. "I think there's some wisdom and certainly some things that need to be done, but we're not likely to see any significant changes this year."

Further, Kloza attributes the high prices not so much to bad behavior in the oil markets, as to a global population transition.

"A lot of people moving from life of sustenance or poverty in developing nations to lives of where they need fuel for transportation, agriculture and industry," he said.

House Speaker John Boehner said Obama should use the powers his administration already has to curb speculators, rather than introduce "another political gimmick" in asking Congress to take action.

"There are so many things that go into setting the price of oil on the markets," he said. "So it's hard to know what the impact will be of these specific measures you take."

Obama has proposed a six-fold increase in the commodities commission's enforcement staff and funding for new technology to make monitoring easier. He also proposed tighter restrictions on trading.

Kloza said one of the problems is indeed the market for options and futures in oil, which has increased dramatically in the past 10 years. But still, increased global demand has also played a major role in price changes as well.

"A lot of this, while reasonable, may not do anything to impede high oil prices," Kloza said. "I have a hard time believing there's any kind of significant amount of manipulation or collusion."

Kloza said the crowd has determined parking money in oil futures is a very safe investment, which props the price up higher.