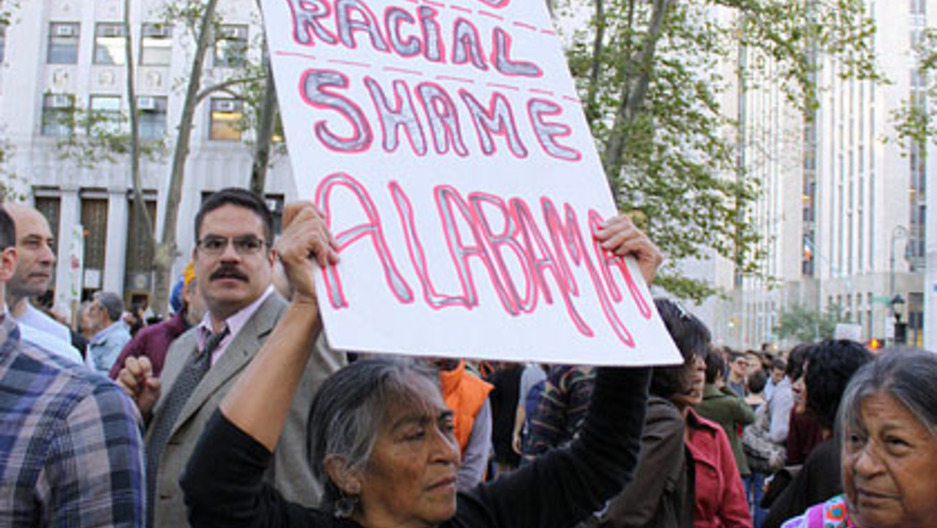 The law was enacted in June 2011 and has been regarded as the toughest anti-immigration law in the country. According to bill sponsor Rep. Micky Hammon, the bill, "attacks every aspect of an illegal alien's life" with the end goal being "self-deportation." The law requires employers, public school teachers and law enforcement officials to check and report on the immigration status of anyone suspected of being undocumented.

Ever since its introduction, the legality of the legislation has been questioned by lawmakers and civil rights groups including the ACLU and the Southern Poverty Law Center. On Thursday, the 11th U.S. Circuit Court of Appeals granted a temporary injunction against enforcing several sections of the law, related to economic and legal transactions between undocumented immigrants and the state. That said, the law remains largely intact.

In response, many undocumented parents have pulled their children out of public school for fear that they will be taken by Immigration and Customs Enforcement. Katherine Gin, co-founder of Educators for Fair Consideration (E4FC) believes undocumented students need support and should be able to gain citizenship through pursuing higher education

"We provide scholarships and we help students find ways to contribute to this county despite the legal obstacles difficulties they face," Gin said. "So we help them find career internships, help them share their stories, and help them develop a network for themselves to help them reach out and find supporters."

E4FC is one organization participating in a nation-wide grassroots effort to assist undocumented immigrant students who face educational barriers.

"A lot of Americans who are opposed to this issue or think that they are opposed to this issue, don't really know the issue," Vargas said. "They don't realize that 60% of people who are undocumented in this country have been in America for more than 10 years. They speak English, they go to school here, work here. People just dont know who we really are, and that's why its so important to have people like Katherine Gin to make us more known."

Earlier this month, Rep. Becky Currie sponsored a similar bill in the state of Mississippi. As more states are taking aim at their undocumented immigrant populations, new voices in support of the undocumented are rising. Jeff Hawkins, the inventor of the Palm Pilot, spoke out in a video for the Define America campaign.

"I have lived in Northern California for 25 years and during that time I have seen a huge influx of the immigrant population from all around the world, and I think its great," Hawkins said in the video. "It really is a wonderful thing and it has contributed to the success of Silicon Valley.

Many supporters of the law, though, argue that deporting undocumented immigrants will improve the job market for legal citizens. Vargas believes immigrants regardless of their legal status contribute to American growth and success.

"This isn't a zero sub game," said Vargas. "In many ways undocumented Americans are not taking away a slice of anybody else's pie, they're actually making the entire pie bigger, and that's part of the message we want to get out there."