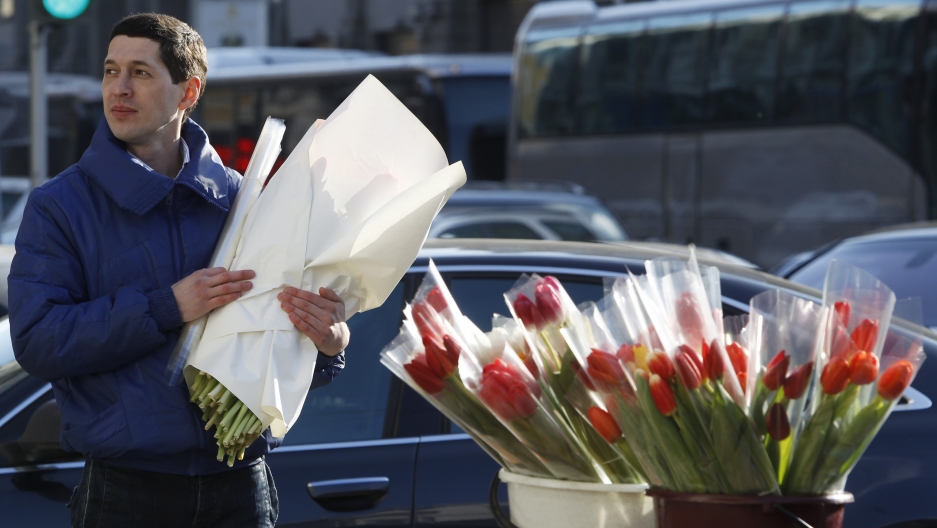 In Moscow on Wednesday, an unusually high number of people were clutching bouquets of flowers.

Some were simple; a few tulips clearly already suffering from the freezing temperatures. Others were far more grand; dozens of roses carefully wrapped and tied with fancy ribbons. Outside the metro station, flower sellers were doing a brisk business.

This is the runup to International Women’s Day. It's a national holiday in Russia. Women are given flowers, gifts and a day to call their own. Someone remarked that it is like Mother’s Day and Valentine’s Day rolled into one.

It is a remarkable contrast to International Women’s Day in other corners of the world. Take Riyadh, Saudi Arabia, for example. It's the only country in the world where women are not allowed to drive. There was seemingly no public commemoration of the day of any kind last year.

One Saudi woman, Fawzia al-Bakr, tried to challenge the ban on driving decades ago. She said she received death threats; she and the others were denounced in mosques across the country. They and their husbands were barred from foreign travel for a year. Some working for the government lost their jobs.

Al-Bakr and many other women in Saudi Arabia are still fighting for basic rights but progress is achingly slow.

So what of Russia, where women are celebrated with their own day? Certainly, they have far more rights than Saudi women. They can vote, drive, work where they choose and run for public office. And yet, even here, many see room for much improvement. Only 14 percent of the members of the Duma, the Russian parliament, are women. There are no female political leaders or senior decision makers in government.

Russian boardrooms are not much better. A recent survey by the business journal Vedomosti suggested 83 percent of employers still prefer to hire a male as a marketing manager, and an even higher percentage prefer men as a financial director or CEO.

According to an article in Wednesay's Moscow Times, “among 50 major Russian public companies, men hold 93 percent of the board seats, according to a February 2011 analysis by Board Solutions, a Moscow-based executive placement firm. That compares with men holding roughly 84 percent of board seats in the United States.”

So, there is room for improvement in Russia and in the U.S. as well. Still, as women and men mark International Women’s Day in Moscow and other parts of Russia, there is unlikely to be anyone willing to swap places with the women of Saudi Arabia.

Perhaps they should send flowers to Riyadh.