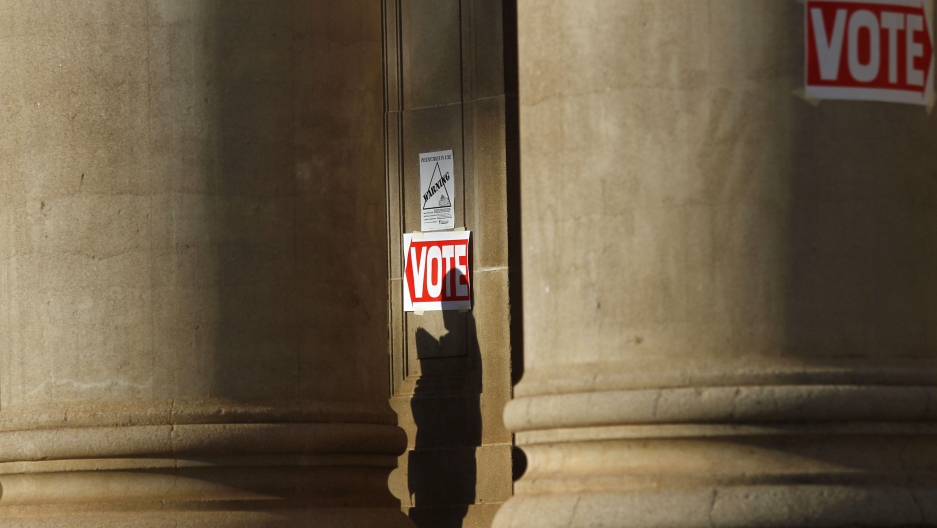 Vote signs hang outside a polling station at Kenilworth School in Phoenix, Ariz., on Feb. 28, 2012. Tuesday is the Republican presidential primary in both states. (Photo by Joshua Lott/Reuters.)

Santorum's campaign robocalled a number of Democratic voters in Michigan to remind them they could vote in the Republican presidential primary there — and vote for Santorum. There's already been talk that Democrats have been and will continue to do that, in an effort to draw out the Republican primary, but to have a Republican candidate openly call for votes from Democrats was surprising.

"Michigan Democrats can vote in the Republican Primary on Tuesday. Why is it so important? Romney supported bailouts for his Wall Street billionaire buddies, but opposed the auto bailouts. Join Democrats who are going to send a loud message to Massachusetts Mitt Romney by voting for Rick Santorum for President."

Todd Zwillich, Takeaway Washington correspondent, said there are several robocalls in Michigan, and at least one was not paid for by Santorum, but by some Democratically-affiliated group. Democrats are pushing for Santorum because they want to deny Romney the sort of momentum-building victory that could put an end to a contentious Republican primary that has been a boon for Democrats.

"Michigan is such a dead heat, Michigan has apparently now trended back to Rick Santorum and he appears to be about 1 percentage point up," Zwillich said. "Here's the monkey-wrench in the whole thing. Michigan has a lot of absentee voters. As many as 15 to 18 percent of people have already voted — and there's no question Mitt Romney has won those huge because he's been so well-organized in Michigan."

Even if Santorum pulls of a victory with Tuesday voters, Zwillich said, that doesn't mean he'll win the actual primary because of all of those absentee ballots.

Zwillich said in the last Republican primary, about 8 percent of votes were cast by Democrats. It's a relatively small amount, he said, but with a race as tight as this one it could make all the difference.

"The only difference here is if you poll non-Republicans in the open primary, Rick Santorum has them by a huge margin, because no one has mentioned them in any context other than hurting Romney," Zwillich said.