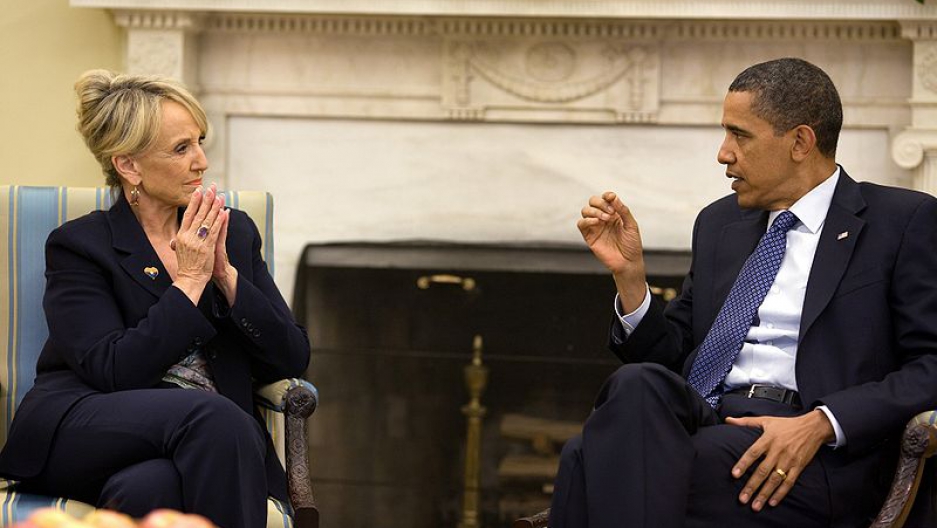 Arizona Gov. Jan Brewer's testy relationship with President Barack Obama had bolstered her standing among Republicans back home — meaning her endorsement of Mitt Romney could be a big boon for the presidential hopeful. (White House Photo by Pete Souz

Time is nearly up for voters in Arizona and Michigan to choose who they want to be the Republican challenger to President Barack Obama.

Will it be former Mass. Gov. Mitt Romney? He's on top of the polls in Arizona by a comfortable margin. Or former U.S. Sen. Rick Santorum? He had a lead in Michigan much of this month but has seen it narrow and perhaps disappear as Romney has regained support. Perhaps former House Speaker Newt Gingrich or Rep. Ron Paul? Neither are polling well in Arizona or Michigan, but may do better in some of the states set to vote on Super Tuesday, next week.

In Arizona, Santorum has shown a surge last week but, according to Peter O'Dowd, news director from KJZZ in Arizona, that has stopped with Romney putting some distance between himself and his current, strongest challenger.

Romney's fortunes got a boost over the weekend, when Arizona Gov. Jan Brewer gave him her endorsement.

"I think he's the man that can carry the day. I'm going to get out there and work as hard as I know how to make sure that he wins Arizona," she said.

O'Dowd said Brewer is extremely popular with the state Republican party — so this could be a big boost for Romney.

"People haven't been quite sure who to go for yet and I think Brewer's endorsement will matter," O'Dowd said. "On the other hand, a lot of our early ballots are already in."

Brewer has been in the news a lot recently for her stand against Obama and the White House. She made waves for a finger wagging she gave Obama when he came to visit Arizona earlier this year and then over the weekend she declined to attend the White House dinner with the nation's governors, citing prior commitments.

O'Dowd said Brewer's stand against Obama has only increased her standing among Republicans.

"I was wondering how much attention that's going to get back at home and how excited people will be to say, 'Oh, look what she did. She didn't go to Obama's event. This is fantastic.' I can almost hear the chatter starting," O'Dowd said.

Jobs and economy, though, even more than Brewer's stand against Obama, are on the minds of voters in Arizona. And O'Dowd says that, too, is another area of strength for Romney.

"When I go to rallies and I ask people why they're supporting one person or the other, the people who are supporting Mitt Romney, without a doubt, are always saying he's strong on the economy," O'Dowd said. "When people say they're going to support Santorum, it's on the social issues."