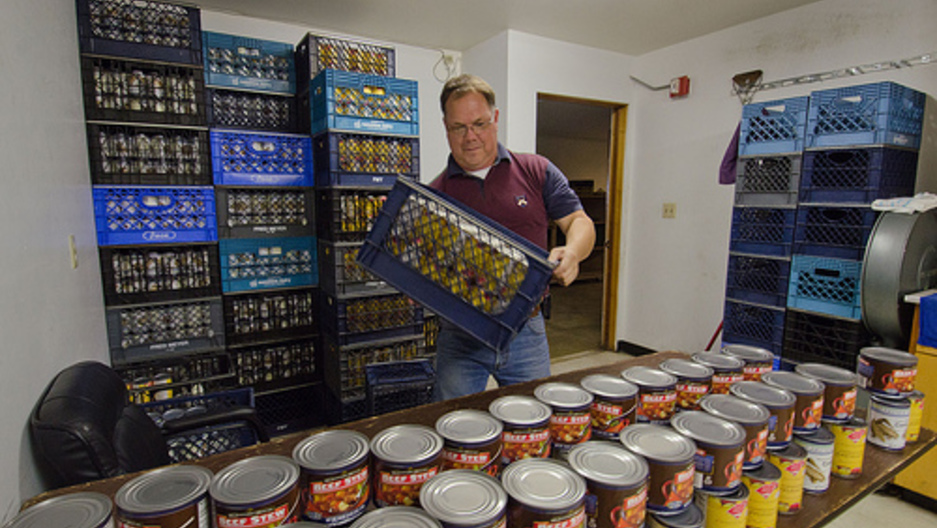 At a food pantry in Washington Joe Tice stocks canned goods for distribution. According to the most recent census data, 47 million Americans now live below the poverty line, the most in half a century. Increasingly, many Americans are relying on local a

Homelessness is on the rise in Las Vegas.

Many middle class Americans have lost their homes.

Rick, an auto repair-man who hasn’t been able to find steady employment for several years, was forced to sell his three bedroom home and move his family into a trailer park.

“Work really dried up bad…I tried to find any job and nobody was hiring,” Rick said.

He has since been able to move out of the trailer park, but the family has not been able to recover economically. His wife Marjorie is anxious about being able to provide for their children.

“I just hope that we can get into a house, at some point, have some freedom and space. The other day my son said, ‘can I have a haircut?’  And we told him ‘you have to wait.’ Something as simple as a haircut, I don’t want to have to worry about that,” Marjorie said.

Rick and Marjorie are not the only families struggling to get by. At Whitney Elementary in East Las Vegas, 85% receive free or reduced-price lunches, and many are classified as homeless. Teachers report that students at Whitney regularly display symptoms of hunger such as dizziness and inattentiveness.

Whitney principal Sherrie Gahn said it is hard for her students to focus on their education when they’re distracted by hunger and anxiety.

“The dream here is that these children will be at the same level playing field as every other child in America. We know that doesn’t happen because they’re in such survival mode,” Gahn said. “They can’t possibly learn because they’re not thinking about learning. They’re thinking about their shoes hurting or where they’re going to sleep at night or their tummies grumbling.”

Under Gahn’s administration, the Whitney school has been transformed into a “full social service organization, providing food, clothing, health care and job opportunities for students and their families.”

In an interview with The Las Vegas Sun, Gahn said she can’t rely on government handouts to support her efforts.

“I’ve never looked to the state,” she said. “I’ve shied away from that because I need to sustain (the program) in the long haul. With budgets the way they are, I didn’t know if they would.”

Instead, Gahn has partnered with local charities and built a network of volunteers who distribute supplies to the student body.

In Lakewood, N.J. Rev. Steve Brigham founded “Tent City,” a camp for homeless individuals and families.  Brigham founded Tent City in response to the growing numbers of homeless people who were left without options.

“There is no place in Lakewood or Ocean County. There are no shelters here. The closest one … is overcrowded on a continual basis” Brigham said.

Many of the occupants of Tent City became homeless when jobs in the construction sector disappeared.

“There are a lot of people that were good hard working people before the recession hit that are now in Tent City.”  Brigham said.  “They would love to have a job… they really don’t want to take government help if they don’t have to, but they realize that the safety net really isn’t there like they thought it was.”

In this election year, poverty is less a story about the students at the Whitney school or the residents of Tent City, and more of a political football in a high stakes game.  The decision of whether to support the “safety net” of federal assistance programs has become a hot button topic amidst the political parties.

According to Columbia Professor of Health and Policy Management Jeffery Sachs, the U.S. is in denial about the realities of poverty within its borders.

“America now has by many standards has the lowest social mobility of all of the high income countries, meaning that a child born into poverty is likely to grow up as a poor adult,” Sachs said. This is stunning for a country that not only prides itself as being a middle class society but as the society where anyone can make it.”