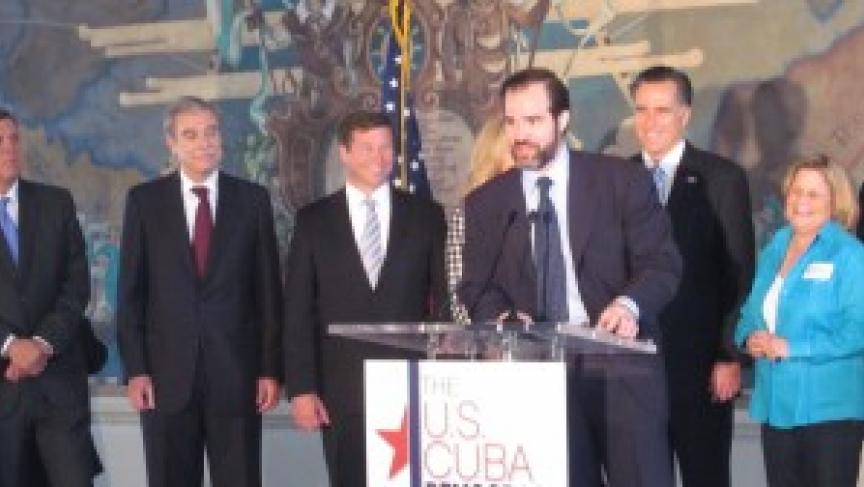 But four years ago, that voting bloc started to fray. Barack Obama captured about a third of the Cuban vote in Miami.

Now the right-wing Miami Cuban establishment has a warning for their community: Obama is soft on the Castro brothers.

Ros-Lehtinen is referring to the Obama administration’s easing of travel restrictions and allowing greater financial remittances to be sent back to Cuba. Critics call the policies an economic boon for the Castros.

“So what you have now is an emboldened regime that feels that they can do whatever they want because they’re not facing any consequences,” said Mauricio Claver-Carone, director of the U.S.-Cuba Democracy PAC. “There has to be consequences to certain bad actions: taking an American hostage, huge waves of repression. If they think they can do it, and they’re going to get this inflow of hard currency, then they’re going to increase the repression and continue doing so.”

The Republican presidential candidates are seizing on this. Mitt Romney spoke on the theme in downtown Miami this week.

But polls suggest a majority of Cuban Americans actually favor the Obama administration's policies toward Cuba.

Uva de Aragón likes the policies and visits the island. She was born in Cuba and left as a young girl. De Aragón recently retired as the associate director of the Cuban Research Institute at Florida International University.

De Aragón sees a contradiction between what many Cuban-Americans say and what they do. For instance, she said when you ask them about remittances, they respond that they are in favor of the embargo.

But De Aragón said when you ask the same people if they send their family money back in Cuba, they’ll say, of course they do.

Cuban American Joe Garcia doesn’t mince words about the hardliners on Cuban policy and the Republican candidates courting them.

“What you have going on here is a clown show and the audience is filled with clowns,” Garcia said.

Garcia ran unsuccessfully for Congress in 2008 and 2010 as a Democrat. He said the president’s Cuba policies have been very effective in assisting dissidents and expanding civil society. He said the hard-line hasn’t worked. Garcia called the rightwing position toward Cuba a religion, not a rational policy.

“Part of the problem is that we’re engaged in revenge politics, which of course feels very nice, right? There’s a warmth and a heat that is driven by the absolute loathing of the Castro regime, which I share in," Garcia said. "But later in the week someone will call for the 82nd Airborne to invade Cuba and I’m sure Gingrich will up the ante by calling for a nuking of the Havana suburbs just to teach Fidel a lesson."

That hasn’t happened. But Newt Gingrich did call this week for American support for a “Cuban Spring.”

Some in the under-30 crowd here say all the bad blood and bickering over travel restrictions and remittances is a distraction.

David Cardenas, and active in the Republican, and Giancarlo Sopo, a Democrat, regularly have dinner together in Miami. They have small disagreements about travel restrictions, but they say it’s not worth arguing about.

“I think on the big issues relating to Cuba, in the final analysis, Cubans overwhelmingly agree with one another,” said Sopo.

“I completely agree with that,” said Cardenas. “I think Cubans are united as a community, united in their policy positions toward Cuba.”

The trade embargo has overwhelming bipartisan support here. And in Congress and the White House.

Cardenas and Sopo are able to break bread together, perhaps because Cuba is not the focus of their lives.

“I would say that Cuban Americans of our generation are not single-issue voters, much in the same way our grandparents and some of our parents are,” said Cardenas.

“I would agree with what David is saying,” said Sopo. “Cuba was much closer to their lives. They had just left the country, many of them still had hopes of going back. I think David and I, we see Miami as our home.”

And that’s where their real disagreement begins: What domestic economic policies are best for their home?